There are lots of ways to do more with your company’s resources.

You can hire the best talent (top performers are eight times more productive). You can improve engagement (companies with engaged employees boast 17 percent higher productivity), or reduce interruptions. There are always opportunities to minimize meetings, promote psychological safety, and even redesign your office space to boost productive hours.

You can also move to the cloud.

Nearly 80 percent of IT professionals say moving to the cloud improved their productivity, according to research by Office 365. And employees who use cloud apps and remote access are 13 percent more productive than their peers, according to a study from Stanford.

So, if you want to increase productivity, a move to the cloud is a good start. And since low productivity costs companies $7 trillion annually, according to Gallup, that move is likely to yield more than just a few more on-time project launches.

With on-premise setups, IT teams are responsible for a long list of tasks, from server setup and parts replacement to handling major incidents and keeping up with the latest in security. With the cloud, you outsource many of those tasks to your vendor, freeing up your IT team to focus on the highest-value tasks for your business. 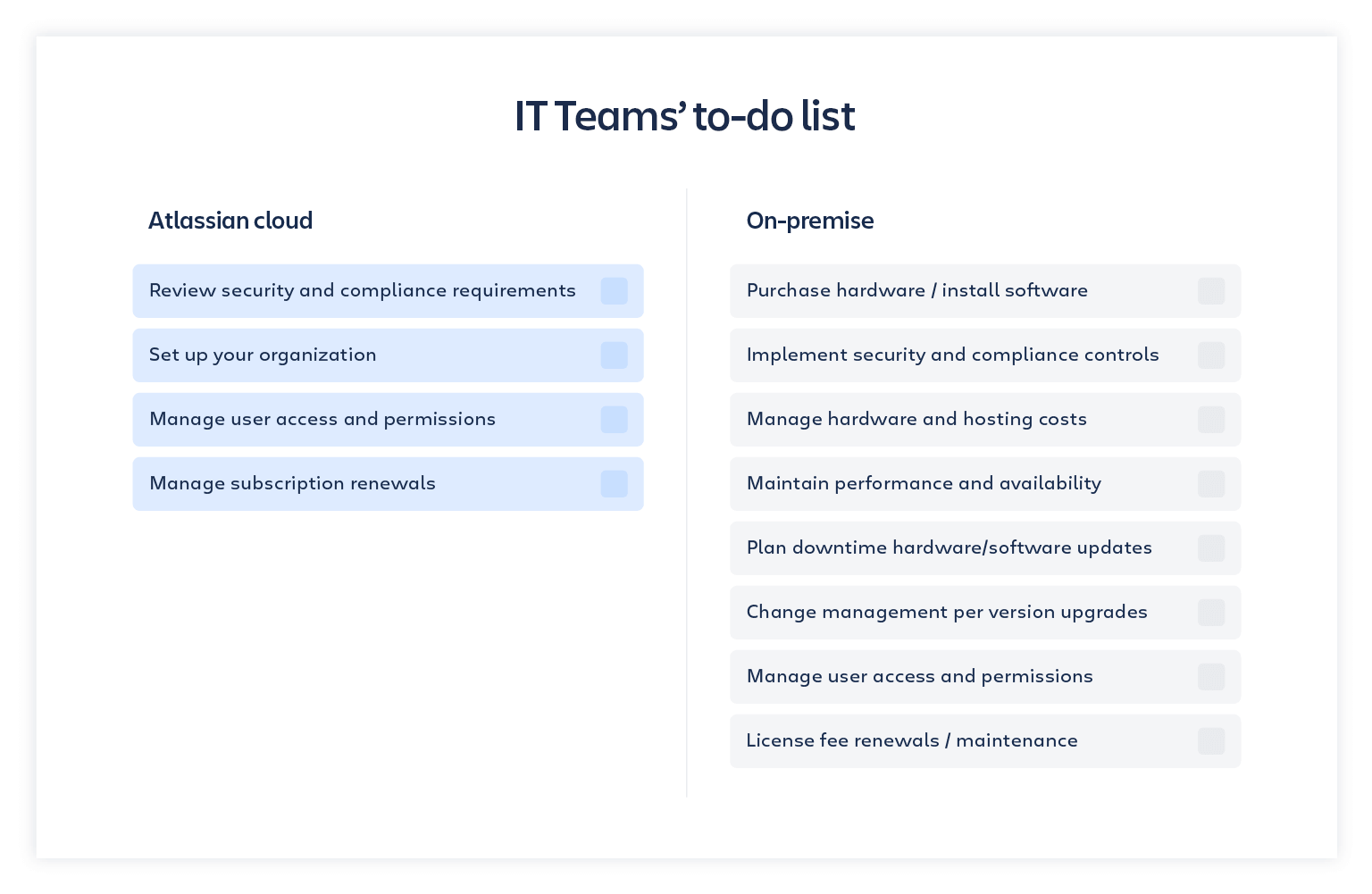 Since we moved to cloud, our internal IT tickets have been cut by 50 percent. Instead of dealing with bugs or admin requests, I’m mostly hearing about new apps and features our users want to add, ultimately helping them do their jobs better and providing more value to our customers.

Airbnb’s VP of Engineering shared a similar sentiment in an interview on their architecture:

It is important for our engineers to focus as much as possible on the things that are unique to our business, not running a ton of infrastructure.

As a bonus, migrating also impacts how you hire, shortening the list of must-have skills for the IT team and freeing you to hire people who have deep expertise instead of broad, shallow skillsets.

Reducing the number of tasks on your IT team’s list isn’t just about freeing up time. It’s also about freeing up mental space – a more subtle consideration that has a big impact on productivity.

In other words: the more tasks on your IT team’s list, the less likely they are to do them all well. Error rates rise by 50 percent when we try to take on too many things at once. Workers with long to-do lists report elevated stress levels (and stress leads to disengagement and loss of productivity). And multitasking hurts not only performance but also long-term brain health and IQ.

So, when we say that most IT teams are overburdened and constantly switching tasks, we’re also saying those teams are far less likely to be productive, creative, and strategic than their more focused counterparts.

Removing the need for expertise in load balancers, server room climate control systems, and the latest security updates are one way to lift the mental burden and foster a more focused, more productive team.

Cloud Unburdens Your Non-Technical Teams, Too

It’s easy to assume that all those time savings only benefit IT teams, but cloud tools offer productivity benefits for every team – from marketing to HR to sales and beyond.

One of the core reasons for this is automation. Automating workflows, documentation, and basic tasks not only shortens employee to-do lists, but also frees up that elusive, valuable mental space, reduces multitasking, and lets people focus on their strengths.

This shifts the focus to more important work tasks and has a direct impact on employee happiness, productivity, retention, and engagement. Because according to Gallup, people who use their strengths daily are six times more likely to be satisfied at work.  They’re also 8 percent more productive and 15 percent less likely to quit.

Another way the cloud makes non-technical more productive? Cloud tools tend to release small, regularly paced updates. This means that, instead of having to train teams on a long list of new features two or three times a year, they get a series of much smaller changes more regularly. And since incremental changes are more likely to stick than big ones, the learning curve feels less daunting. It also means teams have access to the latest features and security the moment they’re available, so they can take full advantage of every new benefit.

Remote and distributed teams are the future, which is probably why every year more companies embrace them, hiring the best talent for high-skilled positions no matter whether that talent lives in Toledo, Ohio, or Toledo, Spain.

And as remote work and distributed teams grow, so too does our need for tools that connect us; tools that encourage open communication, allow teams to collaborate in real-time without being in the same physical space and give admins a bird’s-eye view of everything going on with their teams.

It’s no longer good enough to rely on the complex dance of self-hosted VPNs and virtual machines and data that’s only accessible on-site – at least not if you want to be a competitive workplace. After all, employees are 50 percent less likely to quit when you allow them to work from home, and 58 percent of employees say remote work has made them more satisfied with their jobs.

Whether your teams work in a single office or all around the globe, 87 percent of leaders say the cloud is a breakthrough for collaboration – and every study we’ve read agrees. Collaboration drives perseverance, engagement, productivity, and high performance. And collaborative companies are five times as likely to be high performing than their siloed peers.

With on-prem setups, a collaboration between teams is complicated at best. Files, data, and documentation are often stored in silos. Teams have little visibility into what other teams are doing. And tracking down documentation is often a physical act of walking to another floor and seeking out the person responsible for it.

With the cloud, collaboration is built-in. Teams can comment on documents in real-time (and at the same time). They have easy access to documentation and data, as long as they have the right permissions.

Published at DZone with permission of Miles Buckley. See the original article here.