The ELK Stack is a great open-source stack for log aggregation and analytics. It stands for Elasticsearch (a NoSQL database and search server), Logstash (a log shipping and parsing service), and Kibana (a web interface that connects users with the Elasticsearch database and enables visualization and search options for system operation users). With a large open-source community, ELK has become quite popular, and it is a pleasure to work with.

In this article, we will guide you through the simple installation process for installing the ELK Stack on Amazon Web Services.

The following instructions will lead you through the steps involved in creating a working sandbox environment. Due to the fact that a production setup is more comprehensive, we decided to elaborate on how each component configuration should be changed to prepare for use in a production environment.

We’ll start by describing the environment, then we’ll walk through how each component is installed, and finish by configuring our sandbox server to send its system logs to Logstash and view them via Kibana.

Note: All of the ELK components need Java to work, so we will have to install a Java Development Kit (JDK) first. Likewise, the instructions here were tested on version 6.x of the ELK Stack.

We ran this tutorial on a single AWS Ubuntu 16.04 instance on an m4.large instance using its local storage. We started an EC2 instance in the public subnet of a VPC, and then we set up the security group (firewall) to enable access from anywhere using SSH and TCP 5601 (Kibana). Finally, we added a new elastic IP address and associated it with our running instance in order to connect to the internet.

Production tip: A production installation needs at least three EC2 instances — one per component, each with an attached EBS SSD volume.

To start, connect to the running server via SSH: ssh ubuntu@YOUR_ELASTIC_IP

Prepare the system by running (this may take a few minutes):

The ELK Stack (Elasticsearch and Logstash specifically) require the installation of Java 8 and above.

Verify that Java is installed:

If the output of the previous command is similar to this, then you’ll know that you’re heading in the right direction:

Elasticsearch is a widely used database and search server, and it’s the main component of the ELK setup.

To begin the process of installing Elasticsearch, add the following repository key:

If the output is similar to this, then you will know that Elasticsearch is running properly:

In order to make the service start on boot run:

Production tip: DO NOT open any other ports, like 9200, to the world! There are many bots that search for 9200 and execute groovy scripts to overtake machines. DO NOT bind Elasticsearch to a public IP.

Logstash is an open-source tool that collects, parses, and stores logs for future use and makes rapid log analysis possible. Logstash is useful for both aggregating logs from multiple sources, like a cluster of Docker instances, and parsing them from text lines into a structured format such as JSON. In the ELK Stack, Logstash uses Elasticsearch to store and index logs.

This file tells Logstash to store the local syslog ‘/var/log/syslog’ and all the files under ‘/var/log*.log’ inside the Elasticsearch database in a structured way.

The input section specifies which files to collect (path) and what format to expect (syslog). The output section uses two outputs – stdout and elasticsearch. The stdout output is used to debug Logstash – you should find nicely-formatted log messages under ‘/var/log/logstash/logstash.stdout’. The elasticsearch output is what actually stores the logs in Elasticsearch.

Production tip: Running Logstash and Elasticsearch is a very common pitfall of the ELK stack and often causes servers to fail in production. You can read some more tip on how to install ELK in production.

To make sure the data is being indexed, use:

You should see your new Logstash index created:

To install Kibana, use this command:

Test: Point your browser to ‘http://YOUR_ELASTIC_IP:5601’ after Kibana is started.

You should see a page similar to this: 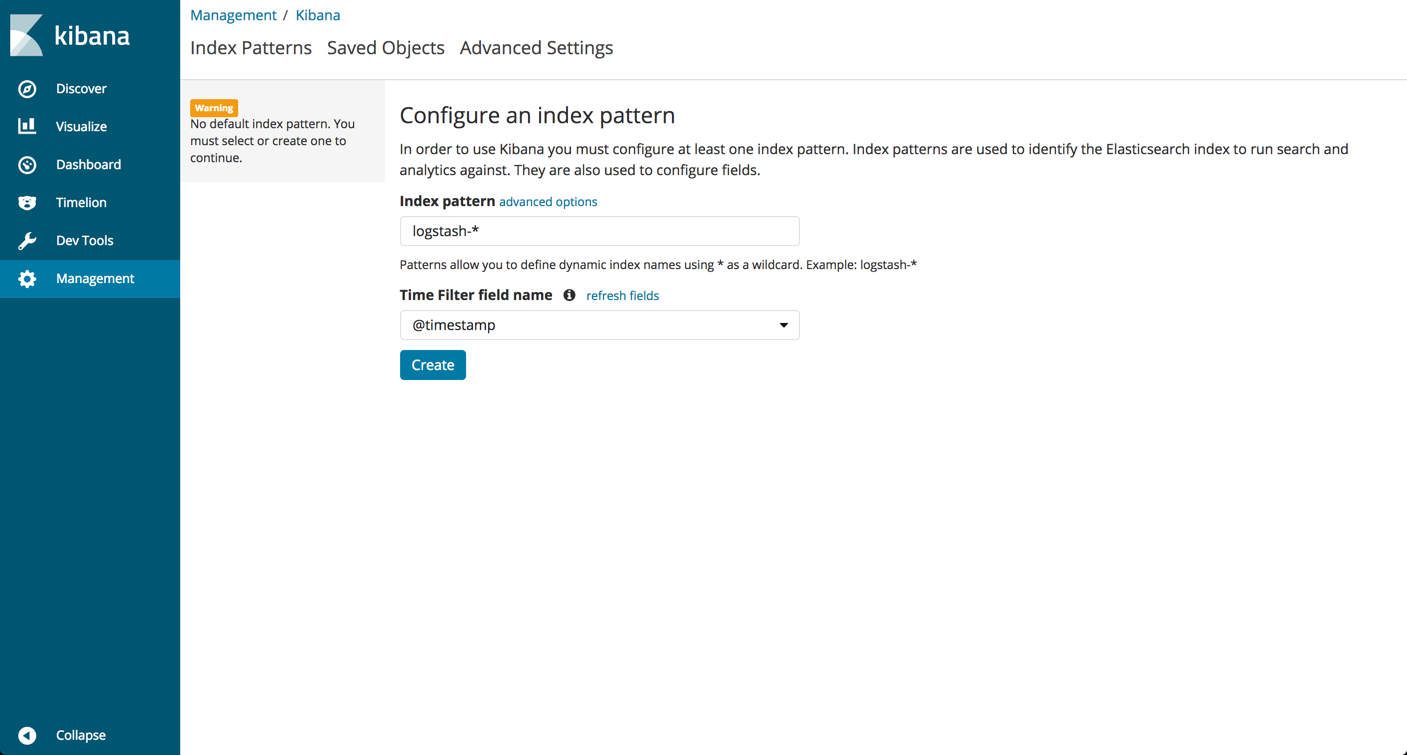 Before continuing with the Kibana setup, you must define an Elasticsearch index pattern.

What does an “index pattern” mean, and why do we have to configure it? Logstash creates a new Elasticsearch index (database) every day. The names of the indices look like this: logstash-YYYY.MM.DD — for example, “logstash-2017.12.10” for the index that was created on December 10, 2017.

Kibana works with these Elasticsearch indices, so it needs to know which ones to use. The setup screen provides a default pattern, ‘logstash-*’, that basically means “Show the logs from all of the dates.”

Since we created a new Logstash index in the previous section, all we have to do us click the “Create” button to define the pattern in Kibana.

Production tip: In this tutorial, we are accessing Kibana directly through its application server on port 5601, but in a production environment you might want to put a reverse proxy server, like Nginx, in front of it.

To see your logs, go to the Discover page in Kibana:

As you can see, creating a whole pipeline of log shipping, storing, and viewing is not such a tough task. In the past, storing, and analyzing logs was an arcane art that required the manipulation of huge, unstructured text files. But the future looks much brighter and simpler.

How to Install the ELK Stack on Azure