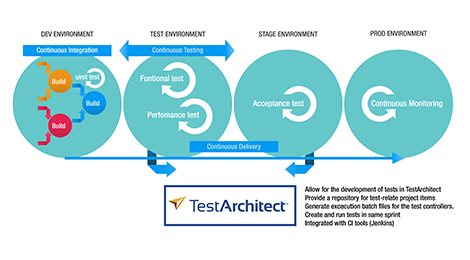 it is fundamental for testing teams to align their test design, test automation, and test case development with devops – not only to verify that the code changes work, but that the changes do not break the product. a key differentiator of devops is testing maturity. an organization can automate their integration, testing, delivery, and monitoring but still have issues with the intelligence of test orchestration and automation, which can lead to a bottleneck if this is not resolved beforehand.

in most projects, testarchitect can be used in a general devops process. following the action based testing method , testarchitect offers capabilities to develop and automate test cases quickly in the same sprint as the application under test, thus allowing team members to become actively involved in the testing and automation process, each from their own skill perspective. apart from qa other team skills and roles will typically be development, operations, and product ownership.

there are four continuous processes in devops as below.

once the automated tests are ready, they can be put into test suites. their execution can be a defined batch file, which can be executed by any scheduling or continuous integration tool and even be used for testing in production. the results of the automation execution can be generated in xunit format, xml format, or html format which can be read and be run against reports.

a file is created with an execution command that includes which tests to run, and all relevant settings and options specified in the rest of the execution dialog.

the generation of execution information is controlled in the second tab of the execution dialog:

allowing the team to create powerful and maintainable tests, and organize their automation like outlined above can help teams achieve an effective and efficient development and release process.