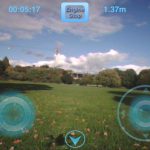 recently i covered a study that was examining some of the main reasons why drones have accidents. the researchers examined over 150 reported incidents involving drones from around the world to better understand just what caused them.

the analysis revealed that the majority of incidents were as a result of technical problems with the drone.  over a ten year period up to 2016, this was the cause of 64% of incidents, with the authors suggesting that this underlines the importance of authorities doing more to prove the airworthiness of vehicles.

whilst technical issues are clearly important however, we shouldn’t diminish the role user error plays in drone incidents.  in an attempt to reduce these, a recent study set out to examine ways to make the control interfaces on drones safer.

existing interfaces can present a number of challenges for pilots, especially inexperienced ones.  for instance, whilst left means left when the drone is traveling away from the pilot, when it’s traveling towards the pilot, left means right, requiring the pilot to mentally rotate their compass in order to fly the drone correctly.  whilst this can, of course, be achieved, it can slow down response times and present a hazard.

the researchers tested a range of interfaces, including user-centric controls such as those found on an airplane, and external controls such as a joystick remote control.  the test subjects were a cohort of around 30 drone novices, with the goal being to find the interface that was both easiest to use but also safest.

as the pilots were navigating their drone through an obstacle course their performance was being measured for things such as avoidance rate and response time.

when the performances were analyzed, it emerged that the user-centric interface was the most effective in terms of both performance and safety.

“despite increases in drone-crashes, research and development on user-centered control interfaces has been limited. the user interface of drones is critical to safety, quality piloting, and satisfaction. we are developing other user-centered drone interfaces especially for non-experts, and are eager to collaborate with manufacturers to improve safety,” the authors say.

as drones become more commonplace, hopefully, the findings will go some way towards designing safer interfaces to reduce crashes as a result of user error.