At Moesif, we primarily market to developers and other technical audiences like product managers and developer relations teams looking to make their own developer platform successful. Getting developers to adopt your API or tool is hard and requires heavy investment in experimentation and measurement in order to achieve the results you’re looking for. At the same time, much of the online advice you hear for B2C or B2B marketing simply won’t work when marketing to developers. This article outlines much of the findings we’ve seen as we grew Moesif from 0 to now over 5,000 companies including Deloitte, UPS, and Radar.

Before jumping into things you should be trying, let’s review what’s so special and hard about marketing to developers. Most developer-focused companies are founded and led by developers themselves, so you would think figuring out things like product marketing should be easy right? After all, you’re just marketing to yourselves. Just like any audience, there is no single developer persona.

Fast and iterative experimentation is critical to recoup any investment in paid ads. If you’re not diligently tracking your metrics, you can easily run up your cost per acquisition (CPA). However, what do you actually measure against for a developer tools company? Accurate attribution can be complicated since for many developer-tools, the majority of the value and magic your product creates is via an API or integration, not via a mobile or web app. This means a user who signed up and clicked around your website isn’t necessarily a converted user. Yet, there is some intent based on the content or areas of the product a user is looking at. For most developer-first companies, we recommend looking at a metric such as developers who made their first API call. Later, you can define additional funnel stages such as developers who made more than X transactions through your API or developers who used Y different features. Additional complication comes from attributing back to the marketing channel since now you have to instrument both your website to track the acquisition channels a developer went through and then linking that to what the developer did with your API. 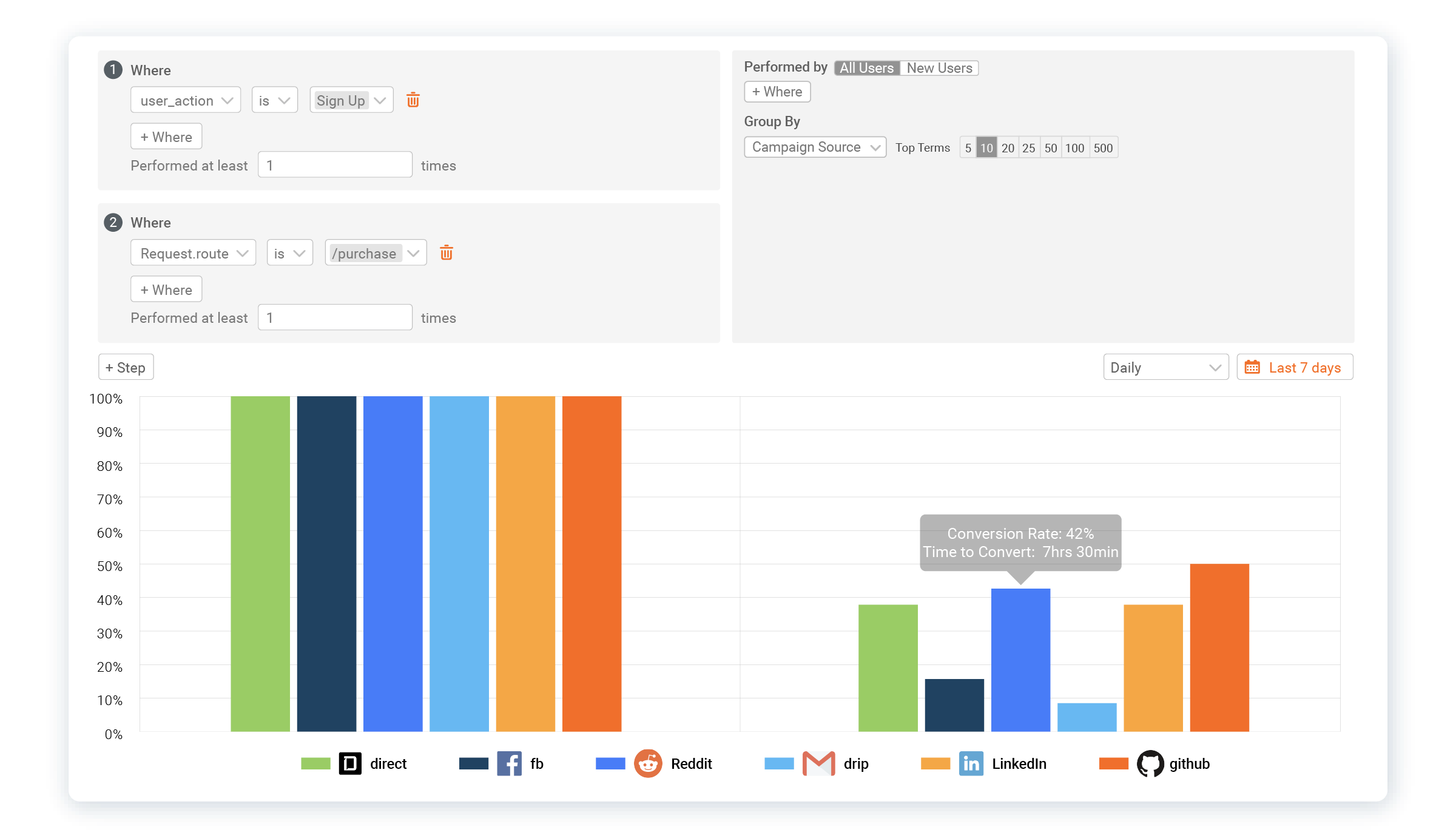 Most social ad networks are designed to target general consumers based on personal demographic data, not developers. You can target consumers with these networks with simple Yes or No filtering. Such as Does the person live in San Francisco or Is the person aged between 18 and 24 years old. This means if you’re a pizza shop in San Francisco, it’s relatively easy to set up Facebook ads to target college students aged 18 to 24 who live in or around San Francisco. This demographic may be ideal late nite pizza customers.

For developer’s there is no single “is developer” demographic that can be answered via a simple Yes or No question. You could attempt something like _Is their college degree Computer Science”, but software engineering is a career with a variety of educational paths and does not always require a computer science degree. Even if you could match on a person’s title, software engineering is an ambiguous role with varying responsibilities. Some engineering develop embedded systems for cars and drones, some software engineers are focused on building internal data analytics infrastructure, others are integrating billing APIs.

Many developer tools are in horizontal markets targeting a variety of markets rather than singling out a specific industry, but they solve a specific problem. Like enterprise sales, this means you need to target the right developer who will have a use for your devtool and champion it internally.

The art of selling to developers is similar to most complex enterprise sales processes which have a multitude of stakeholders involved. For devtools, the number of stakeholders can be even more than traditional SaaS since you may have architecture review, security sign off, implementation, etc. This is because many times developers are checking out your tool or product for a corporation, not just for themselves. Handling these complications can be rolled into your marketing plan, rather than waiting until last minute objection handling.

Technical audiences are by nature skeptical. They love to build things, not buy services. This creates inherent biases as they are exposed to third party solutions. Due to internal political struggles, some developers may have resentment or bias against sales and marketing teams. This makes direct outreach less effective. While it does work for certain top-down sales strategies such as for selling security software to CISOs, many devtools are trying to get an individual developer to first adopt the tool and then grow from there.

Why is inbound great for developers

As mentioned, developers are usually skeptical of traditional marketing activities. Whether this is an email from a SDR that is two paragraphs too long or a huge banner that says “Sign up now.” Being numbers-driven, they would rather cut through the bullshit and explore how something works themselves rather than be told  how something works by a non-technical person. Developers also love to tinker and discover. That feeling of discovery though is a strong emotion. Think of the last time you discovered some new life hack or website that became your favorite and told your friends. That’s what inbound marketing leverages.

Effectively inbound marketing makes it appear that the developer discovered a new tool or platform on their own when in fact they were marketed to.

How to do inbound marketing with paid advertising

When done right, paid ads can drive adoption with low acquisition cost, but it requires much more planning and support than simply dumping a bucket of money on Facebook ads. If done incorrectly, you’ll still be pushing your product. The key is to be natural.

First you should decide on the goals of these initiatives, such as:

Once you have your core objectives, you can lay out a content strategy to be used for social ads just like you would create a SEO strategy and keyword planner. Content is the number one item that makes your ads appear inbound. Content should be genuine and interesting to developers, but still relatable to the specific pain your tool solves.

It’s a fine line how specific you want to be. If you go too broad, then you’re not really pulling in the right developers that would adopt your solution. You can’t push out content that tells a developer to sign up when they don’t yet recognize they even have a problem. The way to solve for this is mapping the above goals to content that targets various stages of buying funnel:

Ensure you can capture leads

For most developer companies, more marketing dollars go to lead generation than any other activity. However, this requires additional infrastructure to handle this. One of the easiest is to mix some of your ungated content with gated content. Gated content is when an email is required to download or view the content. This usually works best with eBooks and white papers since the author usually spent more time drafting it to make it more valuable to the reader vs a simple blog post to overcome the barrier of leaving an email. To make gated content effective, you need:

Not all content needs to be gated, but if the goal is to maximize lead generation over website traffic, having gated content is an easy way to do this. Gated content can take other forms such as webinars and meetups.

Be specific in your targeting

For developers, pick your social channels and targeting criteria wisely. As mentioned at the beginning, targeting developers is hard because the role is relatively ambiguous. One way to circumvent this is to spend the most time and money on channels that enable targeting developers. Moesif had good luck with LinkedIn ads because you can narrow down to specific titles, seniority level, and company industry. We also had good luck with Reddit since you can target specific subreddit groups that are relevant for our analytics platform. We don’t use Facebook ads at all for initial outreach. Instead, we only use it for retargeting existing developers who have already signed up for Moesif, which brings up another point:

Your ads should be driven from their behavior

Of course at Moesif, we eat our own dog food and use Moesif ourselves to create cohorts of users based on their API usage data for retargeting: 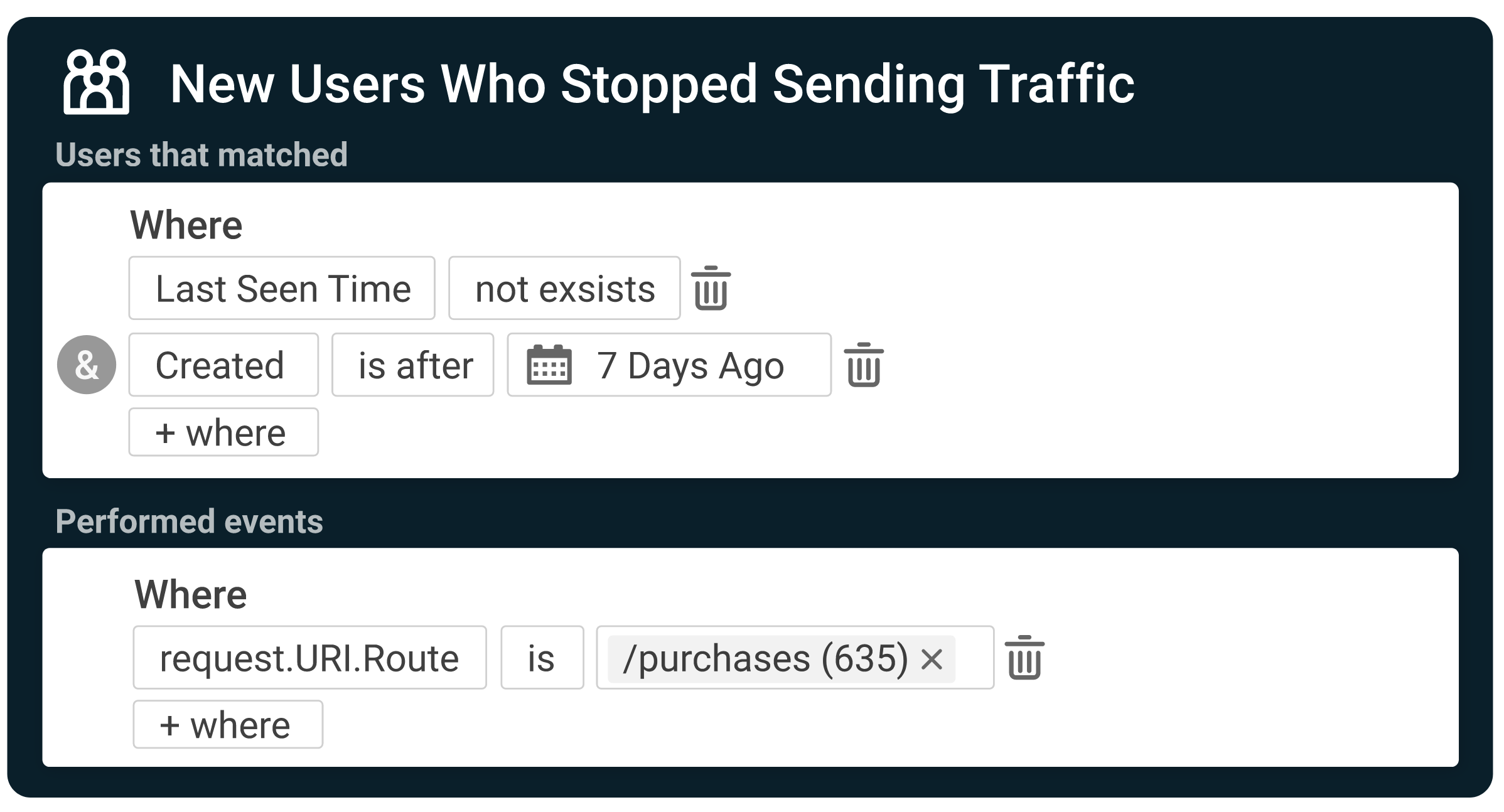 These are synced to Hubspot and various ad platforms so that we can insert different ads based on whether a developer sent their first API call or not along with have they passed their free limits, etc. This enables the ad messaging to be much more specific to where the developer is in your developer funnel.

Tracking usage and retention accurately is critical in 2020 as leadership shifts from a growth at all costs to efficient growth driven from product optimizations. No longer can you just measure vanity metrics like pageviews and signups. Instead, you should be measuring the entire funnel and understand the inputs that impact each stage. How does changes to your pricing and packaging modify your conversion rates from active developer to converted paying customer.

Published at DZone with permission of Derric Gilling . See the original article here.