The name of our data migration tool is Nebula Graph Exchange. It uses Spark as the import platform to support huge dataset import and ensure performance. The DataFrame, a distributed collection of data organized into named columns, provided by Spark supports a wide array of data sources. With DataFrame, to add new data source, you only need to provide the code for the configuration file to read and the Reader type returned by the DataFrame. 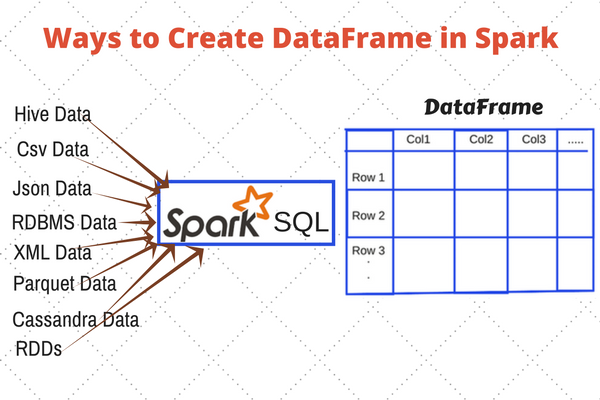 As mentioned above, a DataFrame is a distributed collection of data organized into rows and columns. A DataFrame can be stored in multiple partitions. The partitions are stored on different machines to support parallel operations. Besides, Spark also provides a set of APIs that allow users to operate DataFrames easily, just like operating locally. What’s more, most of the databases support exporting data into DataFrames. Even if a database does not provide such a function, you can manually build a DataFrame with the database driver.

After transforming data into a DataFrame, Nebula Graph Exchange traverses each row in the DataFrame, obtain the corresponding values by column names according to the fields mapping relationship in the configuration file. After traversing batchSize rows, Exchange writes the obtained data into Nebula Graph at one time. Currently, Exchange generates nGQL statements and then writes data asynchronously by the Nebula Client. We will support exporting the sst files stored in the underlying storage of Nebula Graph to acquire better performance. Next, let’s move on to the implementation of Neo4j data import.

Neo4j provides an official library to export data directly as a DataFrame. However, it doesn’t support resumable downloads. Therefore, we did not use this library directly. Instead, we use the official Neo4j driver to read data. To obtain better performance, Exchange executes different skip and limit Cypher statements by calling Neo4j drivers on different partitions, and distributes data to different partitions. The number of partitions is specified by the configuration parameter partition.

The procedure is demonstrated in the following picture: 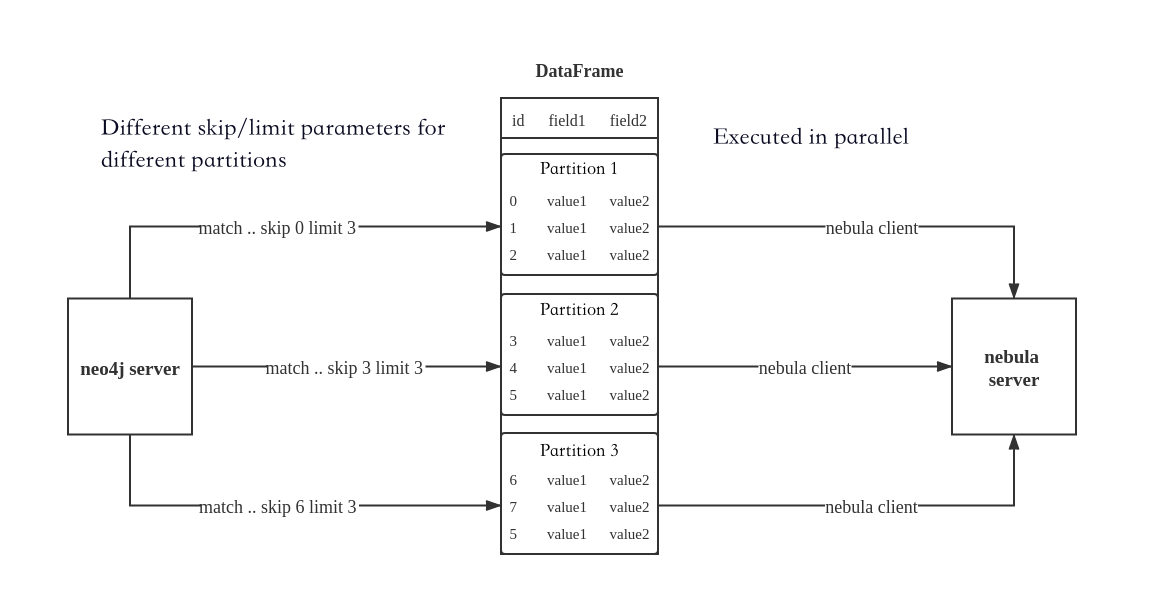 We use the following system environment to demonstrate the import here:

Since Nebula Graph is a strongly-typed schema database, you need to create a space, tags, and edges types before importing data. For more information, see Create space syntax.

Here we create a space named test, with the replication number as one. We create two types of tags: tagA and tagB. Both have four properties. In addition, we create an edge type edgeAB, which also has four properties. The nGQL queries are as follows:

Now let’s import the Mock data to Neo4j. The Mock data contains one million vertices labeled with tagA and tagB, ten million edges labeled with edgeAB. Note that data exported from Neo4j must have properties, the data type must be exactly the same as that of Nebula Graph.

Finally, to speed up the Mock data importing to Neo4j and improve the read performance, we created indexes for the property idInt both in tagA and tagB. Attention here, Exchange does not import indexes and constraints to Nebula Graph. So do remember to create and rebuild index.

Then we import the data from Neo4j to Nebula Graph. First let’s download and pack the project. You can find the project in the tools/exchange directory of the nebula-java repository. Run the following commands:

Then you see the target/exchange-1.0.1.jar file.

You can use the hash policy or the UUID policy for vertices, edge source vertices, and edge destination vertices. The hash/uuid function maps the string type fields into the integer type fields.

Because the preceding example uses integer VIDs, no policy setting is needed. See here to know the difference between hash and uuid.

In Cypher, we use keywords ORDER BY to ensure the same order for the same query. Although the returned data order seems the same without ORDER BY, to avoid data loss in data importing, we strongly suggest using ORDER BY in Cypher, though the importing speed is sacrificed to some extent. To raise the importing speed, you’d better sort the indexed properties. If there aren’t any indexes, check the default order and choose a suitable one to improve performance. If you can’t find any sorting rules in the default returned data, you can sort the data by the vertex/edge ID, and set the partition value as small as possible to reduce the sorting pressure for Neo4j. That’s why we set the partition number to one in this example.

In addition, Nebula Graph uses ID as the unique primary key when creating vertices and edges. If the primary key exists before inserting new data, the old data under the primary key will be overwritten. Therefore, using repetitive Neo4j property values as the Nebula Graph ID will lead to data loss because vertices with the same ID are regarded as one vertex and only the last write is saved. Since the data importing to Nebula Graph is parallel, we don’t guarantee that the final data is the latest data in Neo4j.

Another thing you need to pay attention to is the resumable download. Between the breakpoint and the resume, the database must not change status, for example inserting or deleting data is not allowed. The partition number mustn’t be modified or data loss can occur.

Next, run the Exchange to import data. Execute the following commands:

Neo4j and Nebula Graph are different in system architecture, data model, and access method. So we have listed some frequently-seen differences in the following table for your reference: