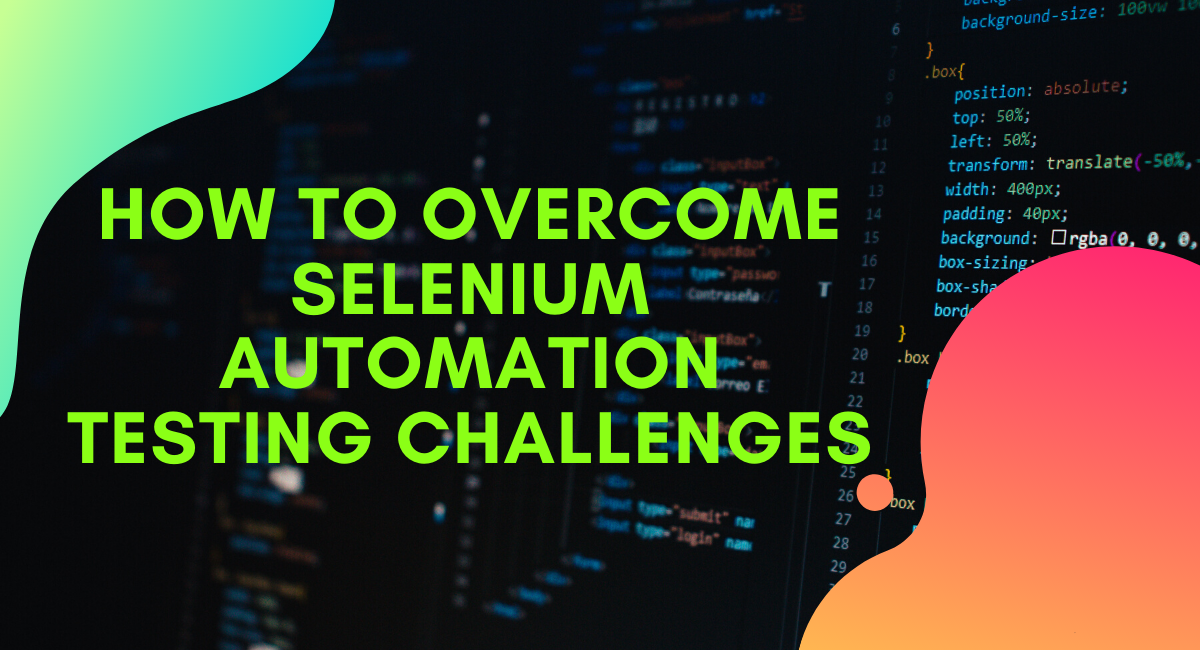 Undoubtedly, Selenium has made web testing far simpler for many QA teams and enterprises worldwide, but it has a fair share of challenges. That being said, most of such issues testers encounter have quite clear-cut solutions, which is why we have summarized some of the common Selenium automation testing challenges, along with their solution. Let’s get started!

When using Selenium, we can create automated test cases on any operating system and browser on desktop, however, we cannot perform mobile tests with Selenium simultaneously.

Solution: You can make use of tools like Appium mobile app automation tool to handle iOS and Android applications utilizing the WebDriver protocol. As more and more users are opting for mobile devices, it’s no surprise that testers and developers are taking benefits of the Appium’s functionalities for this purpose.

There are also tools such as TestProject, based on both Selenium and Appium, and thus providing a great solution for such scenarios in which you need to test web as well as mobile applications.

Reporting is considered as one of the major challenges faced during Selenium automation testing since Selenium does not support effective reporting on its own. You can use various packages or third-party tools such as TestNG, Pytest, etc… However, such options require one to have advanced programming skills, and they are not always elaborate enough.

Solution: With TestProject you can create detailed reports on the fly, without the need to explicitly mention any the reporting steps in your Selenium code or recordings, and without any additional tools required. It’s all taken care of for you, and you get in-depth reports with all the necessary insights and trends needed to troubleshoot your automation testing and measure the product’s quality.

We often receive prompt or confirmation pop-up alerts during test automation, yet Selenium often fails to catch such pop-ups. It can be the trickiest job to automate such alerts to either close or accept them. Selenium does not have the capability to handle windows-based alerts since they are components of the OS instead of the browser. However, Selenium WebDriver does have the ability to handle web-based alerts.

Solution: Selenium WebDriver can operate varied windows. Web-based alerts can commonly be handled with the switchTo method to control the pop-up while allowing the browser to run in the background.

To manage any sort of alert popup, you can also apply a getAlert function. Prior to running the script, you should import a package that can create a WebDriver script to handle alerts. The capable interface brings with it the subsequent commands: void accept (), void dismiss(), getText(), void sendKeys(String stringToSend). The first two clicks the “OK” & “Cancel” buttons on pop-up windows.

Some pages load various elements depending on the distinct user behavior and journey. Sometimes some elements come into view based past actions the user makes. For instance, if you choose a nation from dropdown lists, then cities related that specific nation will load in the cities dropdown. While executing the Selenium test, the script may not be able to locate the element.

Solution: To resolve this specific issue we can use explicit waits in the Selenium script to provide elements with sufficient time to upload and to locate the element. You can also check out TestProject’s adaptive wait capability and make sure to avoid any test flakiness.

Even though Selenium gives you the capability to test on any browser or operating system, it’s still restricted in how many tests it can run at once and how rapidly it can perform them. Without a Selenium grid, you can only execute one test after the other. Selenium Grid can scale your test procedure with the use of remote WebDrivers and enables running tests in parallel. However, you can’t test your web application across multiple combinations of browsers & OS. You can only execute tests on a specific OS and browser (installed on your machine) at a time.

Solution: You can use cloud testing solutions (TestProject has built-in integrations with Sauce Labs or BrowserStack), to test your apps across multiple OS and browsers all at the same time.

This is one of the major challenges faced in automation testing. Selenium does not support windows-based Desktop test automation. It supports only web-based applications.

Solution: Not exactly a solution, but we need to keep in mind that Selenium can’t automate every single thing. There are still some kinds of tasks you need to implement on a manual basis. Thus, as described already above, it is critical to have an understanding of programming languages for using a tool like Selenium.

Selenium automated testing can be tricky but is without a doubt the king of web testing. While automated test cases undoubtedly allow for rapid identification and resolution of problems within an app’s codebase, the challenges are not that easy to be tackled. Thus, additional tools or methods need to be taken into consideration and implemented accordingly.

Encountered other challenges during Selenium automated testing? Share in the comments below!