We all know that Google Chrome is the most popular browser in the world. But do you know, with 17.24% of the overall browser market share, Safari is the second most popular one?

The reason behind Safari’s strong presence is that it is the default web browser for all Apple devices. And we know how much developers and coders love macOS, making it absolutely necessary to ensure that our websites’ are tested and optimized for all Safari versions.

The latest versions of Safari (10 and above) come with safaridriver, an in-built option to carry out websites’ debugging. However, the earlier versions of Safari required you to install the Safari WebDriver extension, which is no longer supported in the latest versions. Safari browser instead uses the safari driver to implement WebDriver protocol.

In this blog, we will see how to use the Selenium safari driver to perform testing on the Safari browser.

Note: You need to have Safari on the Mac machine, as Apple has withdrawn the support of SafariDriver from Safari browsers on Windows.

As already discussed, we don’t have to download Safari’s driver for Selenium WebDriver. Instead, Safari’s in-built driver called safaridriver is presently available in most Selenium client libraries. The safaridriver is maintained by the web developer experience team at Apple. Apple’s safaridriver executable path is /usr/bin/safaridriver. As Safari Technology Preview also provides its own executable safaridriver, it is a path of the application’s bundled contents.

The legacy SafariDriver which was maintained by the Selenium project is deprecated and should not be used. In any case, Safari throws the error ‘Safari no longer supports unsafe extensions’ if you even attempt to install the deprecated Selenium WebDriver for Safari.

For using the Selenium safaridriver for automation testing, you only require Safari 10 (or later) installed on the machine since there is native support for Selenium WebDriver API in those Safari versions.

Step 1: Run the following command on the terminal:

Note: You may need to do so in case you are upgrading from a previous macOS release.

Step 1: Enable the ‘Show Developer’ menu in Safari through Safari > Preferences > Advanced > Select ‘Show Develop menu in menu bar’ (if it is not checked). 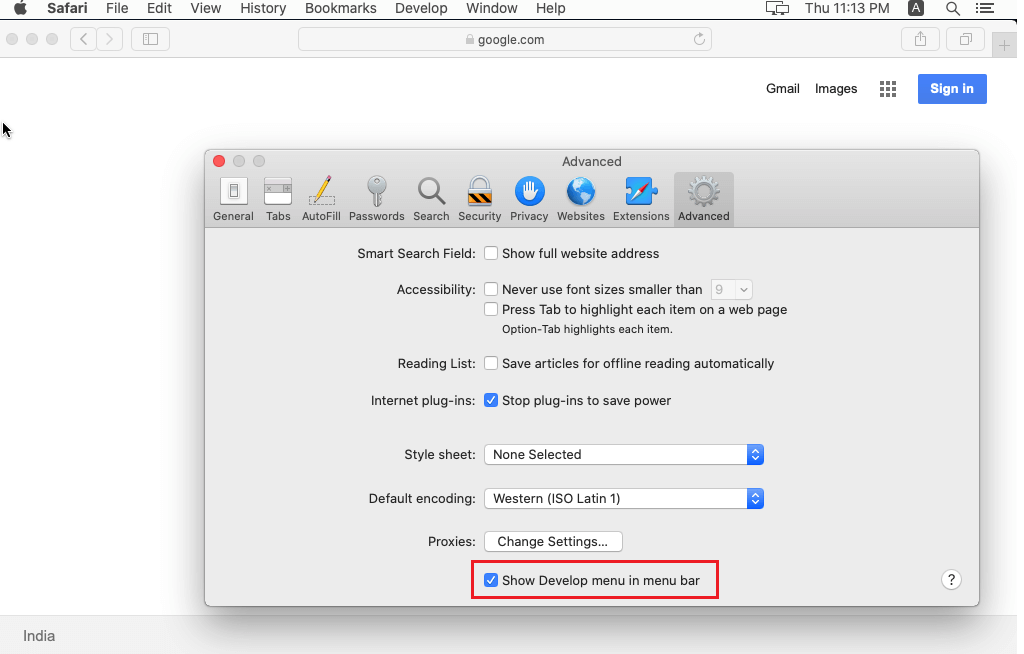 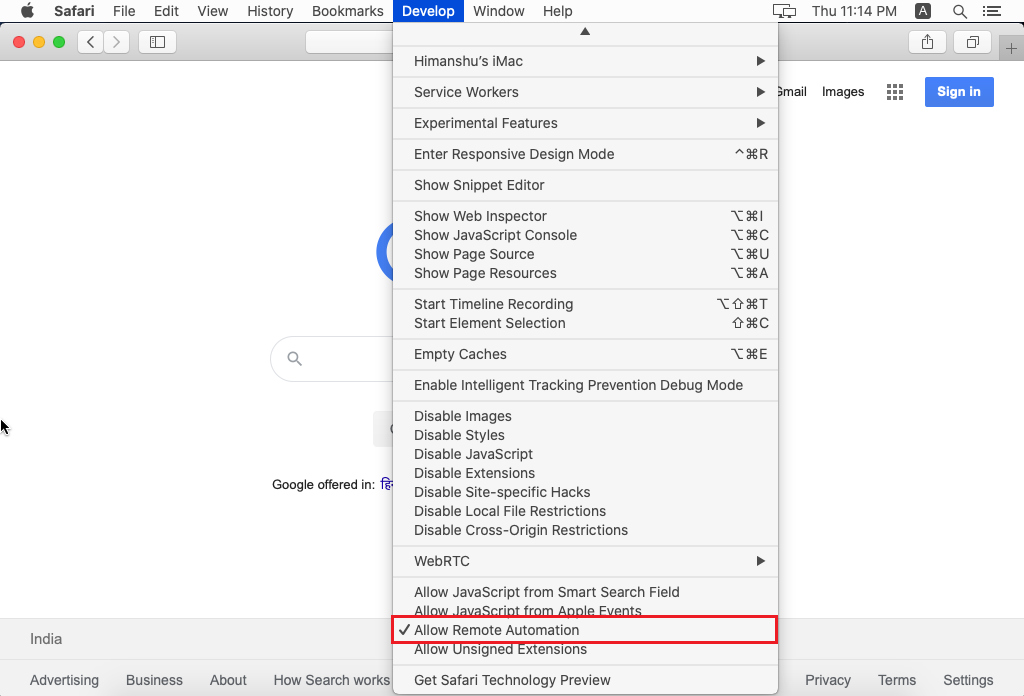 Step 3: Now, authorize safaridriver to launch the XPC service that hosts the local webserver. For this, run /usr/bin/safaridriver once and follow the authentication prompt.

For supporting WebDriver without sacrificing user’s privacy and security, there are additional safeguards that ensure that Selenium test execution is completely isolated from normal browsing data and other test runs.

Here are some of the salient features of the Selenium Safari driver on macOS:

Like automation testing performed using geckodriver (for Firefox), Safari windows on which tests are being executed can be identified by their orange Smart Search field. 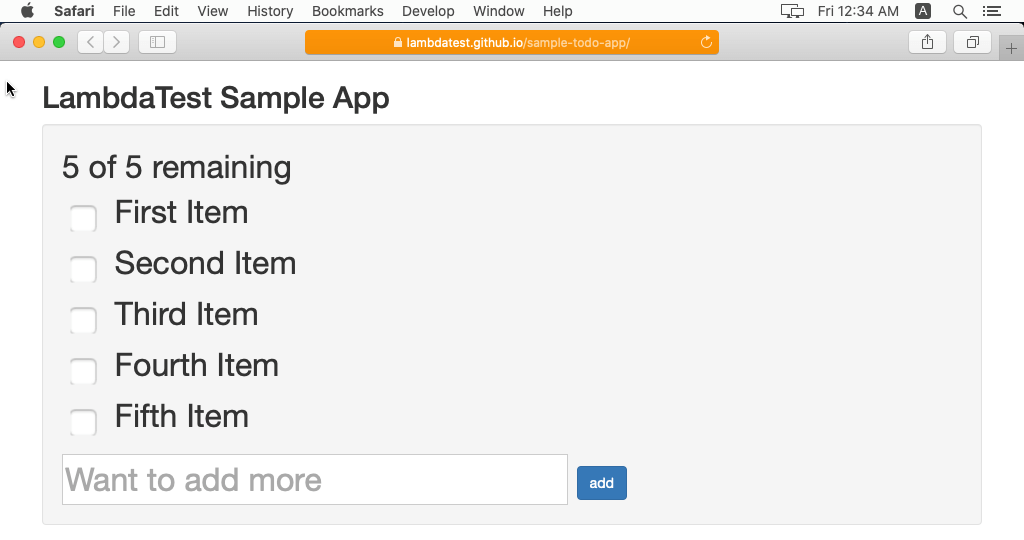 Like a private browsing session in Safari, automation tests using Apple’s safaridriver start afresh so that the previous test session’s persistent state does not have any implications on the newly fired Selenium test automation scenario.

Web Inspector (or Inspect) tool can be used during and after the Selenium WebDriver test’s execution. Features such as locating details about web elements, monitoring network performance, recording performance, etc., in Web Inspector are completely functional when Selenium test automation scenarios are being executed.

Selenium Safari driver on macOS lets you specify WebDriver capabilities in a New Session for debugging.

The safaridriver preloads Web Inspector and JavaScript debugger in the background when the Safari:automaticInspection capability is passed in a New Session request. Like the Inspect tool, you also have the option to pause the test execution for checking the execution details in the Debugger tab of Web Inspector.

The safaridriver preloads Web Inspector and starts timeline recording in the background when the Safari:automaticProfiling capability is passed in a New Session request. The details can be viewed in the Timeline tab of the Web Inspector.

A Glass Pane is installed over the Safari window, where the execution of the automation test is in progress. The glass pane intends to block any interactions such as a mouse, keyboard, resizing, closing, minimizing, etc., that can be performed manually and can hinder the test being performed in the Automation Window.

Shown below is the popup window which comes up when we try to break the WebDriver Session:

Feature 5: Only One Session at A Time

As per Apple’s official blog, these constraints prevent the tests from internally competing with each other for resources like window focus, keyboard events, keyboard focus, and more. It also reflects what you can do in a macOS, windowing environment.

Now that we have set up Apple’s Safari driver, we look at the process of setting up Selenium WebDriver on macOS and running a test in Python. When a test scenario calls a Selenium command, the command is executed in the following manner:

Let’s look at a cross-browser testing scenario that showcases Selenium Safari’s driver on macOS demonstration. Here is the test scenario:

We would be using the PyTest framework for the demonstration. For a quick recap about PyTest, you can refer to this detailed Selenium WebDriver tutorial. You can install PyTest on macOS by triggering the command pip install pytest on the terminal. 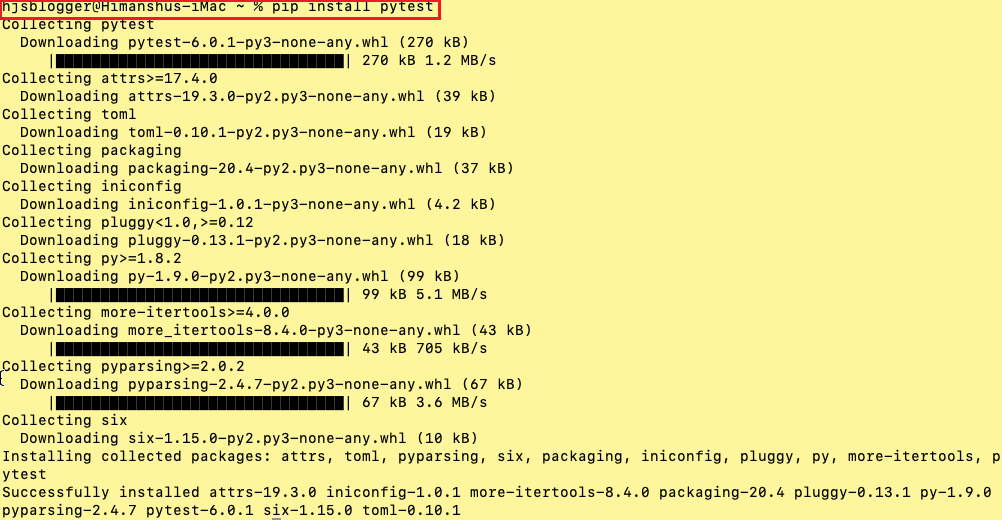 A new browser instance has to be loaded for each test. Hence, the scope of the fixture is set to class instead of the session.

Line (9) – The @pytest.mark.usefixtures is included for using the fixture driver_init().

Lines (14-15) – Selenium WebDriver APIs are used for setting the test URL to the LambdaTest ToDo page. The browser window is maximized using the maximize_window() method.

Lines (17-18) – The Inspect tool in Safari (or any preferred browser of your choice on macOS) can be used for locating the details of the web element.

The find_element Selenium API is used for locating the element with NAME ‘li1’ and ‘li2’.

Lines (24-27) – The details of the web element with ID "sampletodotext" are located using Safari’s Web Inspector tool. The send_keys() method is used to send the required string to that text box. 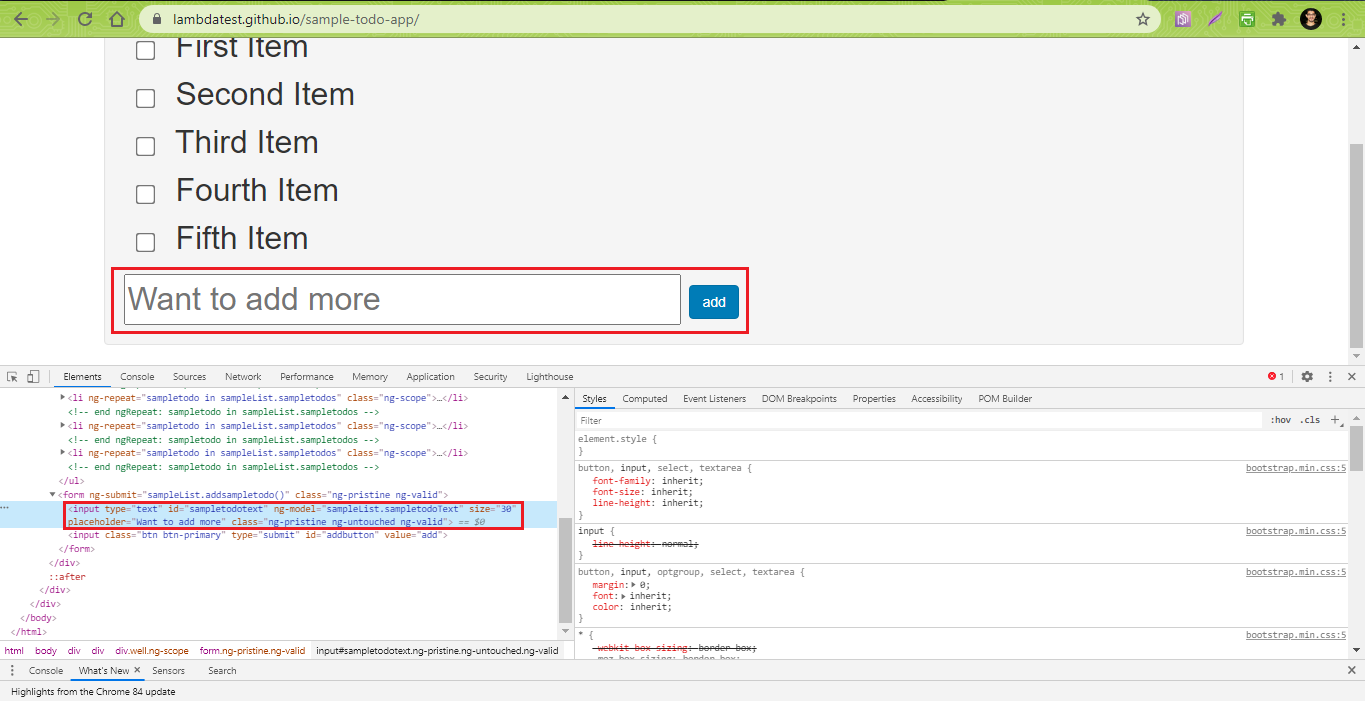 Line (29) – A click() operation is performed on the button with ID "addbutton":

The execution is performed by invoking the following command on the terminal:

Here is the screenshot of the execution, which indicates the test did not pass! 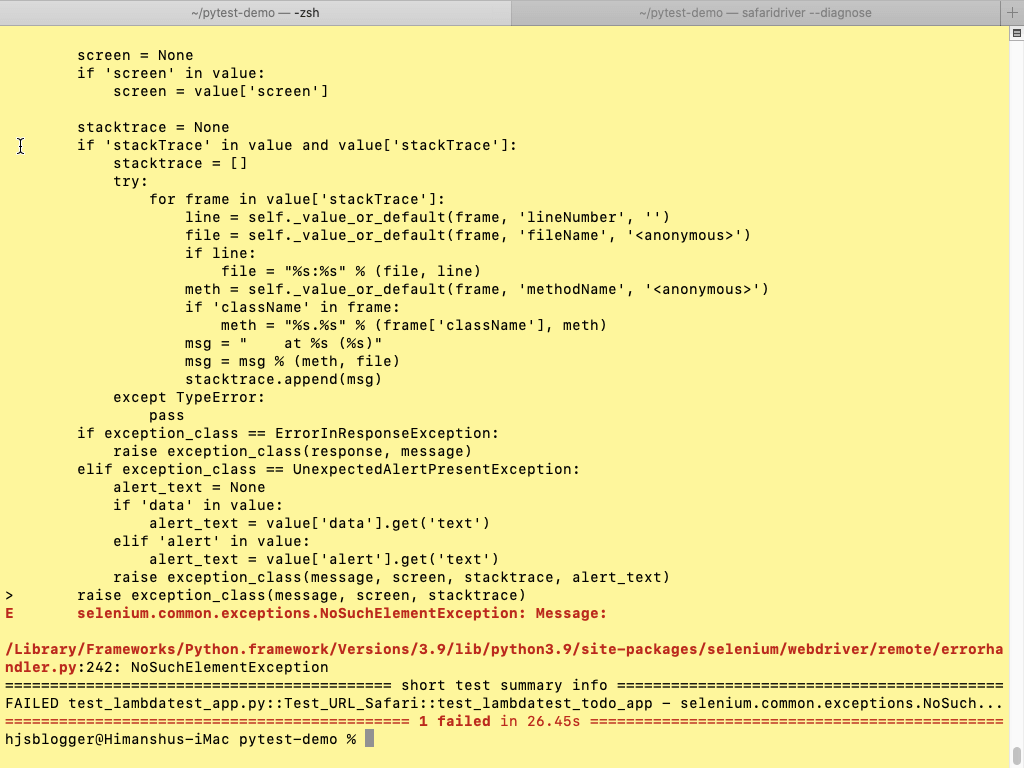 We’ve noticed in some of the threads on Stack OverFlow that Selenium tests are broken on Safari 13 since the click() operation does not work on Safari 13. We also tried the workaround of using Selenium JavaScript with Python on macOS Catalina; however, that also did not work. 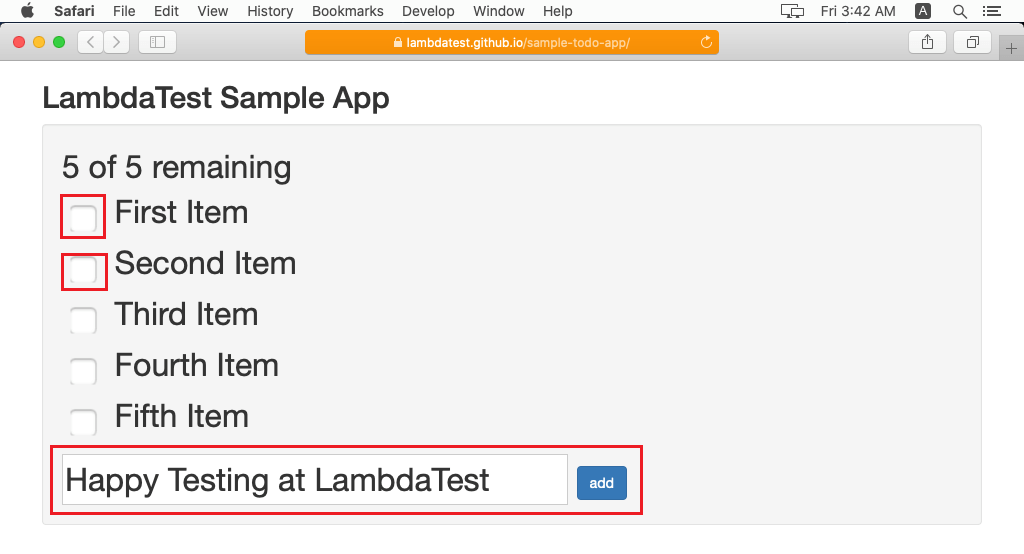 Testing Of Selenium Safari Driver On macOS On Cloud-Based Grid

In this section, we’ll execute the same test scenario on LambdaTest that provides a Selenium Grid on the cloud. To get started, you need to create an account on LambdaTest and note username & access-key from the Profile page.

The test scenario will be executed on Safari 13.0, which is installed on macOS Catalina. The browser capabilities are generated using the LambdaTest capabilities generator. 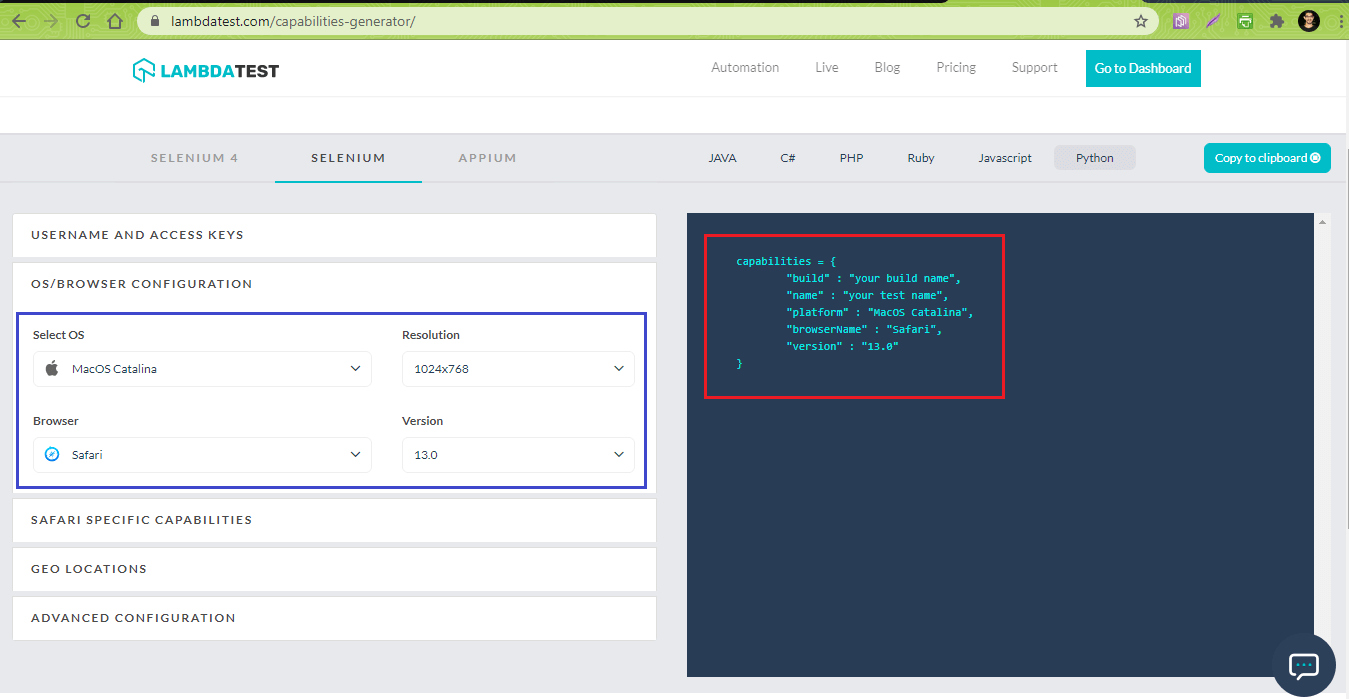 We make the necessary changes in conftest.py to use the Remote SeleniumWebDriver instead of the local Selenium WebDriver.

The implementation in test_lambdatest_todo_App.py remains unchanged since that is independent of the Selenium Grid infrastructure.

Line (21) – The combination of user-name and access-key are used for accessing the LambdaTest Grid URL:

The following command is used for triggering the test on cloud-based Selenium Grid on LambdaTest.

Here is the screenshot of the execution, which indicates that the click operation is working as required on the LambdaTest Grid: 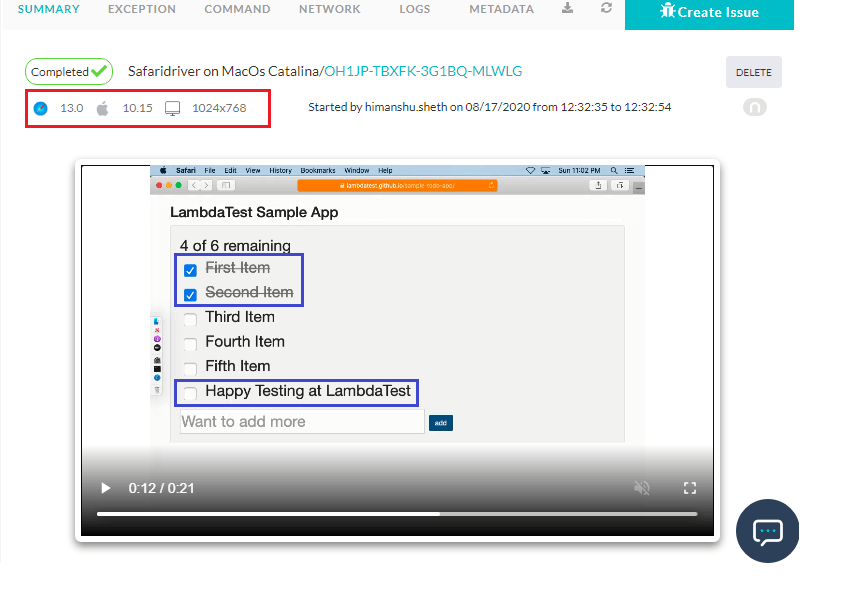 Setting up Apple’s safaridriver on Mac is hassle-free and straightforward since it does not require installing the safaridriver. Despite the simplicity associated with the Selenium Safari driver on macOS, there are issues with events such as click, which does not work when used in Selenium automation testing. In case you do not own a device with macOS on it, there is always an option to install macOS on a virtual machine and try out Apple’s Safari driver for Selenium test automation.

The issues observed with testing using Apple’s Safari driver on the local copy of macOS are not observed with Selenium test automation on cloud-based Selenium Grid by LambdaTest. Along with proper (or expected) output, it results in expediting the process of automation testing.

If you have any issues or questions, don’t hesitate to reach out via the comment section below.