“Never permit shortcuts to be taken in order to expedite decisions.”

“When possible, refer all matters to committees. Attempt to make the committees as large as possible – never less than five.”

“Advocate caution. Be reasonable and avoid haste that might result in embarrassments or difficulties later on.”

“Apply all regulations to the last letter.”

What are those quotes? Advice for being a successful member of a large organization? Section 3.4.7 of your company’s employee orientation manual, perhaps? Nope. These instructions come directly from the CIA’s World War II-era Simple Sabotage Field Manual. 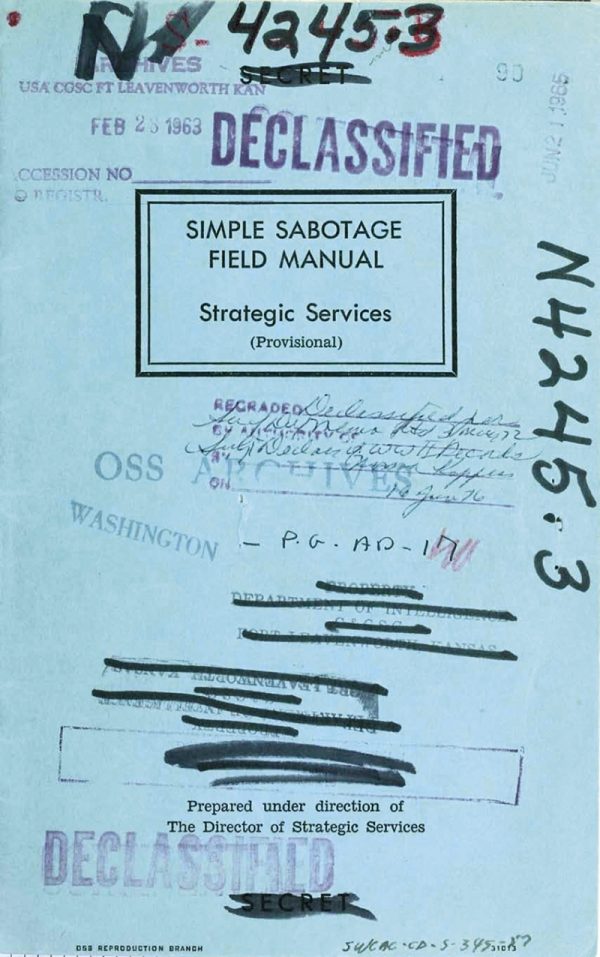 Sabotaging the efforts of a large organization is easier than you might think if simply advocating caution might fall into the category of sabotage. It’s no wonder, then, that sabotaging your digital effort is dead simple.

In spite of its admittedly clickbait-ish title, this cortex isn’t an update of the CIA Manual for the digital age. We’re not trying to help you sabotage your organization, after all. On the contrary. We’re here to help you identify such sabotage and deal with the saboteurs.

As a result, there are actually four questions you must answer:

The first two questions – why and who – go hand-in-hand. Digital initiatives are by their very nature transformative, and such comprehensive change is necessarily threatening to many individuals in your organization.

Look, therefore, for people who have placed large bets on maintaining the status quo. Change is difficult for everyone, but it’s especially threatening for certain individuals in certain roles. Here are some examples.

Most techies enjoy the fact that technology is always in flux and that there is always more to learn. As a result, they dedicate much of their time to learning new things that result from ongoing changes.

However, some people – many in technical areas, but some not – do not feel that way. They’re paid well because they’re experts in a typically legacy technology. The last thing that they want to do is have to learn something new before they retire.

If an employee’s career depends upon your organization keeping some old asset up and running, they may be especially threatened by an initiative that might rock their boat.

As traditional hierarchical organizations grow, they add layer upon layer of management in order to scale. Digital transformation, in contrast, breaks down organizational silos, thus flattening organizations as they seek to address customer needs end-to-end.

On the short end of the stick, the layers of middle management in between the contributors at the bottom and the executives at the top. The more digital an enterprise becomes, the fewer middle managers it’ll need.

Since the big-picture goal of digital transformation is to improve the organization’s focus on its customers and thus its competitiveness overall, you’d think that the executives in charge of running said organization would be on board. Generally speaking, most are – but there are notable exceptions.

In some organizations, executives measure their relative power and worth compared to their colleagues by how many people report to them – a common affliction of hierarchical organizations we call empire building.

The empire builders in your enterprise are particularly likely to sabotage your digital efforts for the same reason middle managers are, in spite of the fact that executives should be focused on strategic priorities.

Any of our likely saboteurs might try one or more of the CIA’s favored techniques, to be sure. However, it may be difficult to discern whether that time-destroying committee meeting or those rigid governance policies are intentional acts of sabotage. For many organizations, after all, such occurrences are business as usual.

The common theme across the techniques of our digital saboteurs is some kind of play-it-safe action or opinion. Every organization is risk-adverse to some extent, so the saboteur will take this routine and important risk aversion and use it as a club to dissuade colleagues from moving forward with any effort that threatens the saboteur.

Yet, the world has changed. Digital transformation is now an imperative for so many enterprises because the risks inherent in not transforming are greater than the risks of transforming. Saboteurs will do anything they can to keep decision makers in their midst from realizing this fundamental truth.

One of the most common of these sabotage techniques is following Gartner’s advice on bimodal IT. Gartner recommends separating slow, traditional IT from faster moving digital efforts – a recipe for digital failure.

Saboteurs realize, however, that Gartner’s advice appears to favor the lower risk option, as it’s relatively easy to convince people that transforming traditional IT is the high-risk alternative.

As a result, saboteurs are only too happy to leverage the argument from authority fallacy (i.e., "Gartner says it, so it must be right!") to sabotage their organization’s digital initiatives.

How to Stop the Digital Saboteur

The CIA was only too aware that the Gestapo would shoot saboteurs on sight. Fortunately, we don’t have to go quite so far today – but in some situations, you must be willing to remove saboteurs from your organization. Whether you fire them or simply encourage them to depart is up to you, but organizational change as fundamental as digital transformation always requires some changing of the guard.

In a more general situation, fortunately, empowering the saboteur – or potential saboteur – is the most effective solution. This counterintuitive approach wouldn’t work with someone acting out of malice, of course. However, in most cases, the individual feels helpless to deal with the changes coming their way but will rise to the occasion given the ability to take some control and make a positive change.

For example, solving the bimodal IT problem requires a carefully thought out plan for transforming traditional IT, which is neither a simplistic rip-and-replace nor a Gartneresque let-slow-go-slow.

To craft such a plan, solicit the cooperation of your post-learning professionals as well as your middle managers by inviting them to organize themselves into task forces that must come up with appropriate transformation strategies.

This self-organization, in fact, is the key to success with digital transformation generally – not simply at the individual team level, but more broadly across the enterprise as it seeks to break down the organizational silos that impede its ability to serve its customers.

Some individuals will resist getting with the program. A few will actually seek to sabotage the organization’s attempts to move to a self-organizational model. However, as today’s enterprises figure out the best ways to empower their employees within the context of their digital initiatives, employee satisfaction and productivity are bound to improve, thus leading to better business outcomes overall.