As companies scale transaction volumes and integrate with more and more third parties, there is a growing inflow of data and business insights. On the downside, this subsequently increases the risk of data breaches and cyber attacks.

According to Forbes, the overall global cost of cybercrime is predicted to total $2.1 trillion by 2019, which is 400 percent more than in 2015.

Primarily, this is a hot topic for financial services companies and fintechs in particular.

"According to the research findings, fintech companies are prime targets for cybercrime attacks with the growth of attacks outpacing transactional increase by 50 percent." – Thinkadvisor

Also, fintechs currently suffer from the mismatch between innovations and regulations as the latter doesn't keep up with the technological advancement in the financial industry. What’s more, early-stage startups usually don’t have adequate compliance teams. Such an unstable regulatory environment creates additional security and compliance challenges for the financial market players.

There are two key technologies that will play a key role in cybersecurity:

There are four major areas in fintech software development where AI is making a game-changing effect:

To detect fraudulent financial behavior and prevent cyber-attacks, fintechs frequently use a generative adversarial network (GAN). GAN is a type of deep learning system that works as two competing neural networks: a generator and a discriminator.

The generator network creates fake data that looks identical to the real data. Whereas, the discriminator network analyses both synthetic data and authentic dataset. Over time, both networks improve their results and learn from each other.

There are many fintechs that work in fraud detection and regulatory area. 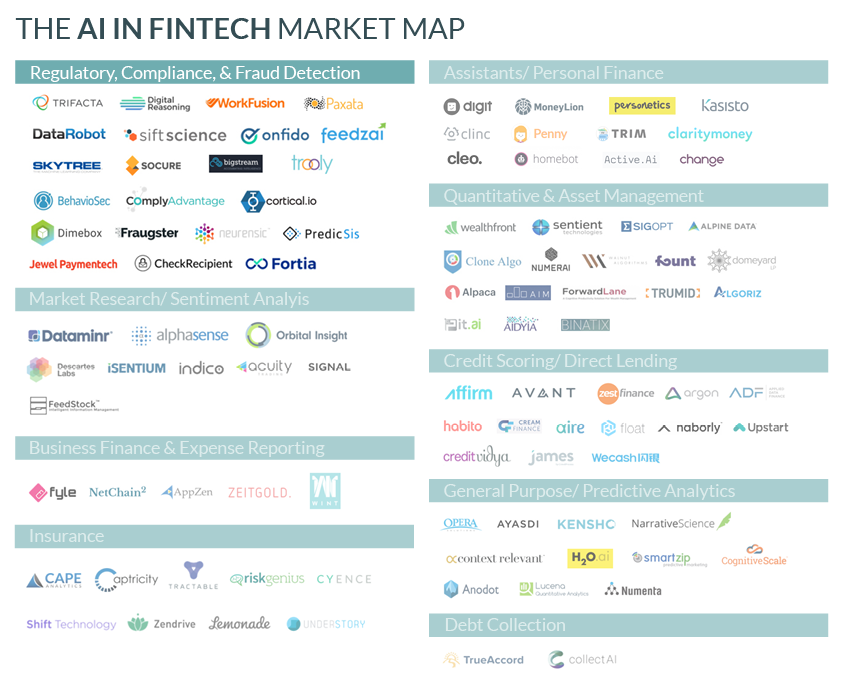 However, we can see that financial incumbents are taking many AI-related initiatives, and they don’t want to lag behind.

According to a PWC report, more than 30 percent of financial institutions are investing in AI.

According to a recent TCS study into AI across 13 sectors, 86 percent of business leaders in the banking and financial services sector said they were already using this technology.

According to reports, banks are mainly focusing on using AI for security and biometrics. 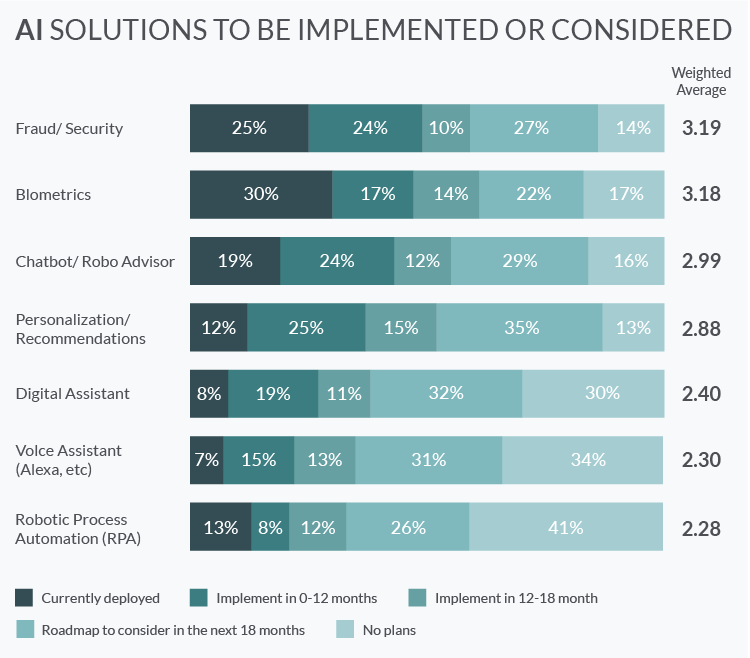 Consequently, we can see a growing trend for the share of jobs that require AI skills. 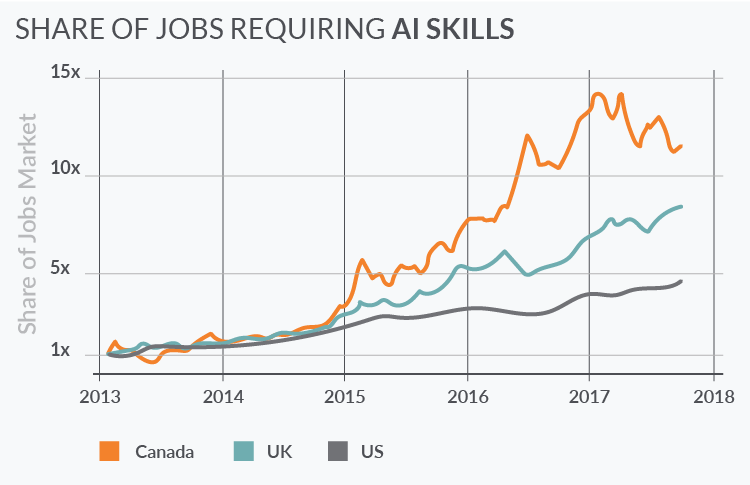 Source: 10 Charts That Will Change Your Perspective On Artificial Intelligence’s Growth

Companies like Amazon, Google, and Facebook are alluring top AI talent with high salaries and high perks. Big banks also have more capital than fintechs to compete for it. As a result, the latter face a severe problem of AI talent shortage.

To face the challenge, many fintechs are looking for AI talent in Eastern Europe, and for a good reason. According to the LinkedIn search results, Eastern Europe has a talent pool of 15,254 AI specialists and 21,035 Machine learning engineers.

The blockchain is another hot topic in fintech. The technology is predicted to reinforce the security of financial operations.

In Forbes’ third edition of the "Fintech 50,” eleven companies use blockchain technology or are connected to the cryptocurrency industry.

According to Statista, the size of the global blockchain technology market is predicted to grow to 2.3 billion U.S. dollars by 2021. 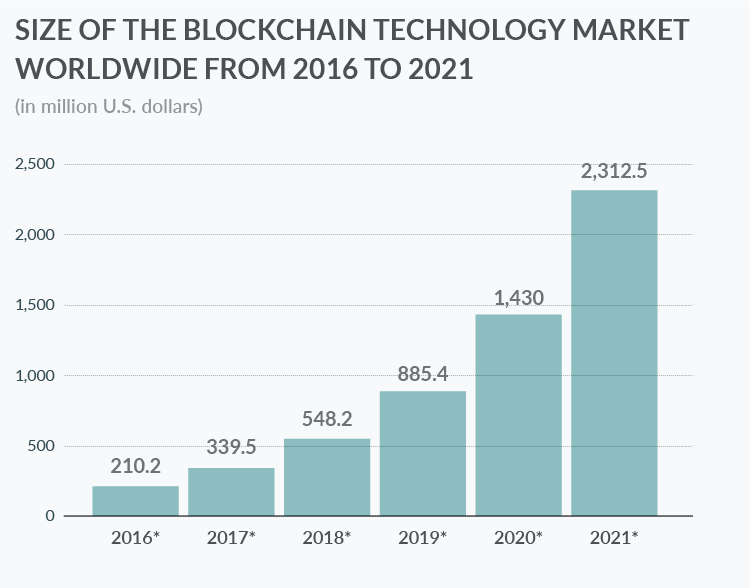 The distributed ledger technology doesn’t apply to all business cases. However, if its usage is well-grounded, it offers multiple benefits, including security, transparency, improved digital identity, and traceability of transactions.

Banks have shown interest in the technology, with nearly one-third of surveyed institutions noting that they have started developing strategies to integrate blockchain into their financial operations. Banks partner with blockchain startups, invest in the blockchain research, and set up accelerators. 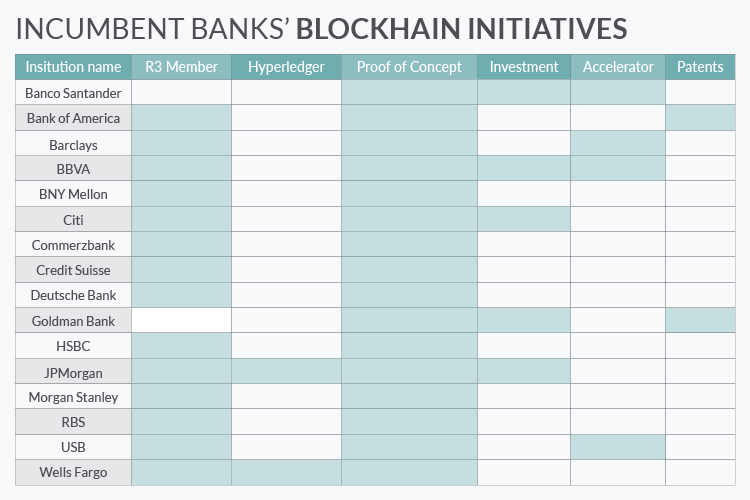 Goldman Sachs set up a cryptocurrency trading desk in New York in June 2018. Across the ocean, Swiss bank UBS is aiming to automate regulatory requirements for the MiFID II/MiFIR rules that took effect in 2018.

Tech giants are not lagging behind either According to CBInsights, Google was the second most active corporate investor in blockchain tech from 2012 to 2017. And now, Google is planning to adopt a blockchain-like ledger system to differentiate its cloud business from the competition.

As we can see, both financial services incumbents and Big Techs are showing considerable interest in blockchain and, subsequently, luring blockchain talent.

The Fight for Blockchain Talent

There is an astounding shortage of blockchain talent across the world, and the competition for it is incredibly fierce.

The scarcity of blockchain specialists has its impact on the global market and companies that want to implement blockchain solutions. According to the findings of the poll conducted by Synechron and TABB Group, about 40 percent of firms do not have enough qualified blockchain engineers.

The shortage of available talent for blockchain was mentioned as a critical topic at the DTCC’s Fintech Symposium, held at the Grand Hyatt in New York City.

According to LinkedIn data, there are just around 75,000 blockchain and distributed ledger specialists in the US and about 16,000 in the UK. Eastern Europe offers an additional pool of roughly 7,500 blockchain engineers. That is a lucrative source of talent for Western companies that have a hard time finding relevant skills in their local markets.

Scaling operations and integrating with third-party companies raises security issues. AI and blockchain are the tech solutions that address those concerns.

However, the demand for project talent causes fierce competition.

Published at DZone with permission of Tetiana Boichenko . See the original article here.