Data is the new currency of today’s digital world. Data is probably the most costly affair these days. If you are using data then definitely you will have volumes and varieties of data in your organization. Some confidential and others super confidential. So the question nagging us - Is the data in Salesforce secure enough?

There are a number of ways for encrypting data in Salesforce. Let’s analyze:

People using Salesforce Developer, Enterprise, Unlimited, Performance and Database.com versions believe there is a way to encrypt the custom fields. You have to select text (encrypted) field when created a new custom field, and it will open the following pages: 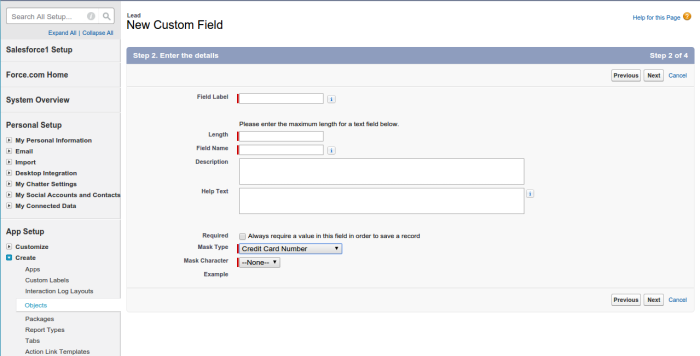 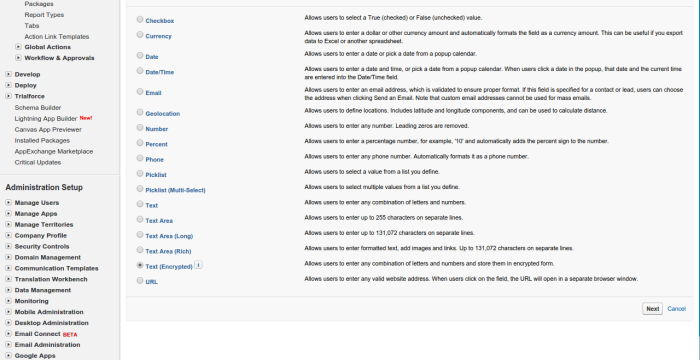 You have to select the most appropriate options as per your security need. This case is mostly opted for when multiple users are viewing information and you want to put a restriction on viewing the data after entering the values. It can also be used to tweak the values or make them partially visible or can also be used for saving the passwords for VisualForce based portals.

If you want a finer level of encryption you can opt for Apex Crypto Class. But for leveraging Apex Class’ properties you have to have a thorough and an in depth knowledge about both the Apex programming, and Salesforce customizations. They help in the creation of data digest, authentication codes and signatures which helps in encrypting your data.

It has mainly a set of four methods:

The encrypt() method is used when you have your own (IV) and the same is supposed to be used to encrypt your data. This is mostly used when you are going for a third party system authentication. And the third party system authenticates the data using the IV. The decrypt() method is similarly used for decryption of the code. However Crypto classes uses only symmetric key encryption.

The private key that is used in the above method is also generated by another crypto method generateAesKey(size). The size defines the length of the encryption protocol. The types which crypto classes support are as follows:

The third possible way to encrypt the Salesforce data is by using the third party encryption services. These are mostly paid or subscription based services.

However encrypted data in Salesforce means that it would not be possible to integrate Salesforce with any other third party based solution without involving encryption solution’s adapter. Which implies that if the third party solution does not have a suitable adapter you have to go for custom based solution.