Regression testing is an essential component in a web application development cycle. However, it’s often a time-consuming and tedious task in the QA process.

After you have decided that the duration and scope of a project are worth the upfront effort needed to set up automation, look for key features in an automation tool that meet the project requirements.

When evaluating an automation tool, you should consider: 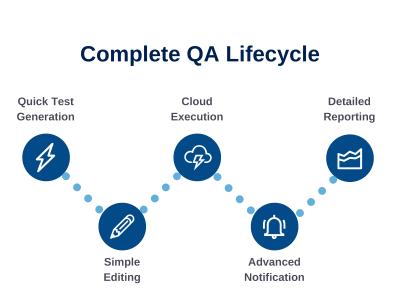 The Most Popular Regression Testing Automation Tool for Web Application

Here are some popular regression testing automation tools, each with its unique features that meet the needs of different projects and budgets:

TruRT’s intuitive interface and the codeless test automation platform is easy to use and offers a variety of features such as integrations, remote test executions, cross-browser testing, data-driven testing, advanced notifications, and comprehensive reporting to increase the productivity of your QA team.

This open-source testing tool integrates with Cucumber/SpecFlow and allows you to write test cases in a variety of programming languages, including C#, Java, Ruby, and Python. It also offers a lot of training and support resources.

Record test cases with this Firefox plugin, which is ideal for testing simple web applications since its functionality is rather limited. For instance, it doesn’t support testing for flash video games, music, UI/UX tests, or file uploads.

An all-in-one solution for test automation of desktop, web, and mobile apps. Its codeless click-and-go interface makes it easy for beginners and non-technical users to conduct regression testing while its functionalities are powerful enough for automation experts with a full IDE.

This tester-focused automation tool is best suited for testing large web applications. It allows you to conduct testing quickly while minimizing maintenance effort. The smart accessor mechanism is designed to ensure that a test script won’t fail even if there are slight changes in the UI.

This platform enables the execution of parallel regression tests using automated builds without any manual intervention. It supports desktop, web, and mobile apps and can be used for GUI testing.

After you have identified the right tool for the project, optimize the QA process by following these regression testing automation best practices:

Plan your QA strategy — Build adequate time into the product lifecycle for testing, decide where QA fits into the process, and consider available resources. E.g., will every user story be tested? What kind of testing strategy will be used?

Identify the test cases to automate — Test cases that can benefit most from automation are repetitive, needed for multiple builds, hard to perform manually, susceptible to human errors, using multiple data sets, or time-consuming when tested manually.

Test early and often — Bugs caught early in the development process will have less impact on the project. They are cheaper and faster to fix than those discovered later during production or deployment.

Integrate development and QA teams — Automation and development teams should be working together seamlessly to reduce churn, minimize miscommunications, and increase the efficiency of the entire development cycle.

Create quality test data — Use external data to make automated tests reusable and easy to maintain. To add testing scenarios, you’d simply extend the files with new data so you don’t have to edit the actual test script.

Create tests that are resistant to UI changes - Set up the tests such that they don’t rely on location coordinates to find objects by providing unique names for the controls. This allows you to create stable test scripts that won’t break due to UI changes.

Coordinate development and QA — Often times, testing can be done most effectively when conducted one sprint behind the development cycle.  Without such a lag, the code could be too fluid for effective testing and changes could break the automation.

Regression testing automation is essential for today’s fast-paced software deployment processes. It helps shorten the development cycles and reduce the time to market, allowing you to respond to user demands in a nimble manner.

To maximize the effectiveness of your testing process, it’s important to select a regression testing automation tool that meets your project requirements while allowing you to manage the entire QA lifecycle seamlessly.

Published at DZone with permission of Sumant Mehta . See the original article here.