Kubernetes is a very popular container orchestrator used by most of the organizations. It is open source and managed by Cloud Native Computing Foundation. A lot among us might be wanting to know how to install and use a Kubernetes cluster. A typical kubernetes cluster looks like the below diagram.

Users could deploy single node clusters like Minikube , Kind and Microk8s on their individual machines to practice kubernetes. Katakoda is also another option where somebody could play around kubernetes. These are very easy to set up and play around. If anybody is interested he could check my previous posts here and here to know how to set up Minikube and run spring boot applications on that.

But when it comes to setting up a multi node kubernetes cluster a lot of us are clueless. Kubernetes Playground is a good option where the application allows you to create a multi node cluster and play with it for 4 hours. A lot of the set up is abstract, but someone could get a feel about it. If learners wish for permanent cluster they might have to go for commercial cloud offering like Amazon EKS, VMWare Tanzu, Redhat OpenShift or Google GKE. Most of these offerings provides some trial period or initial free credits to let the developers get acquainted with the platform and start charging after that. For self learning purpose these charges are pretty high.

For such learners I am publishing this article which will help them set up a multi node bare metal Kubernetes cluster on their personal computers. We will create a VM for Master Node and one VM for worker node, then we would initialize the cluster, deploy workloads on it and then access the workloads outside of the cluster. This needs to be done in below steps.

For this exercise the user needs to have a computer with at least 100 GB of free memory, 16 GB RAM. The computing resources mentioned above is for 1 Master Node VM (15 GB Memory and 4 GB RAM) and 1 Worker Node VM (15 GB Memory and 4 GB RAM) which is the minimum requirement. The RAM size could be reduced to 3 GB and memory to 10GB. If there would be more Node VMs then more computing resources must be available on the host computer.

The machine must have two software. It must have Oracle Virtual Box installed. Users could refer the installation manual here. We would use Virtual Box as our hypervisor. We would be using Ubuntu images for creating the VMs. User could download the Ubuntu 20.04 image from here and store it on the computer.

Before moving to the next step Virtual Box must be installed and Ubuntu image must be downloaded.

Set Up a Master Node

With this step we would create a Master node VM using Virtual Box. Start the virtual box and press CTRL + N or choose Machine -> New from the menu bar. Enter the VM name as master and Type as Linux with Version as Ubuntu(64-bit). Use the below image for reference.

In next step choose the RAM size for the VM. It should be minimum of 2048 MB and more. Refer the below image. 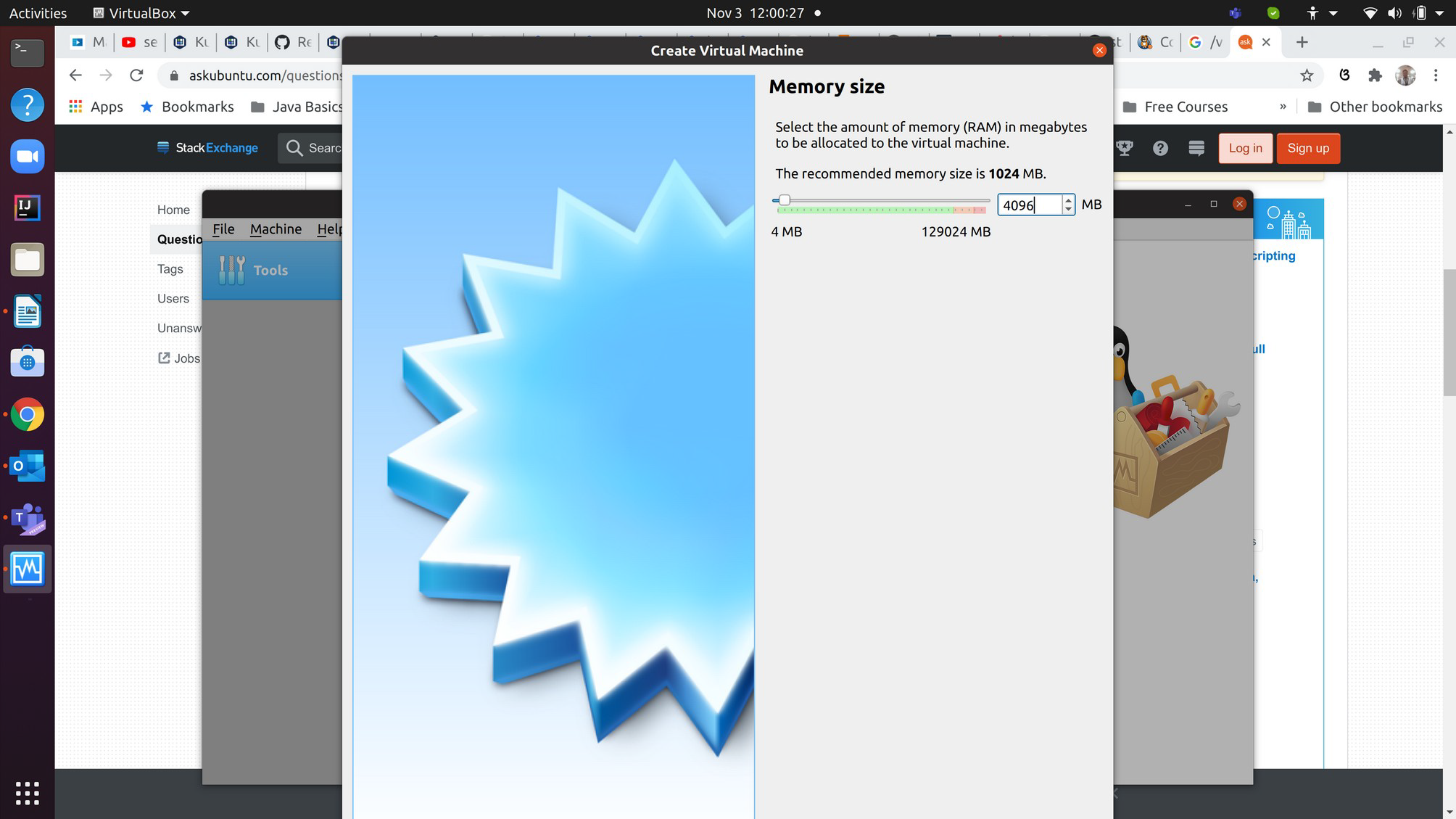 In the next step, choose "Create a virtual hard disk now" as displayed in the below image. 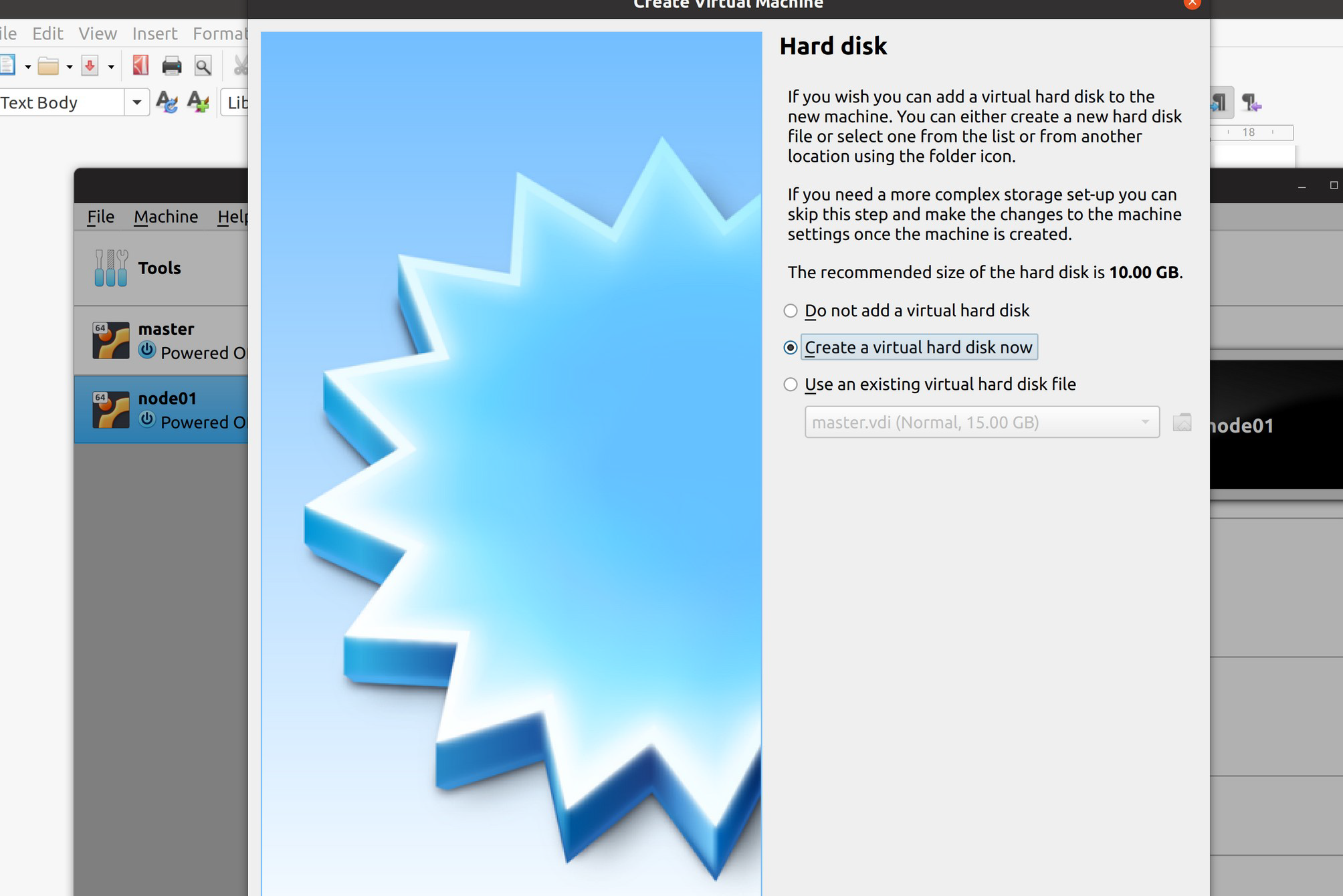 In next step choose VDI as your hard disk as per the below image. 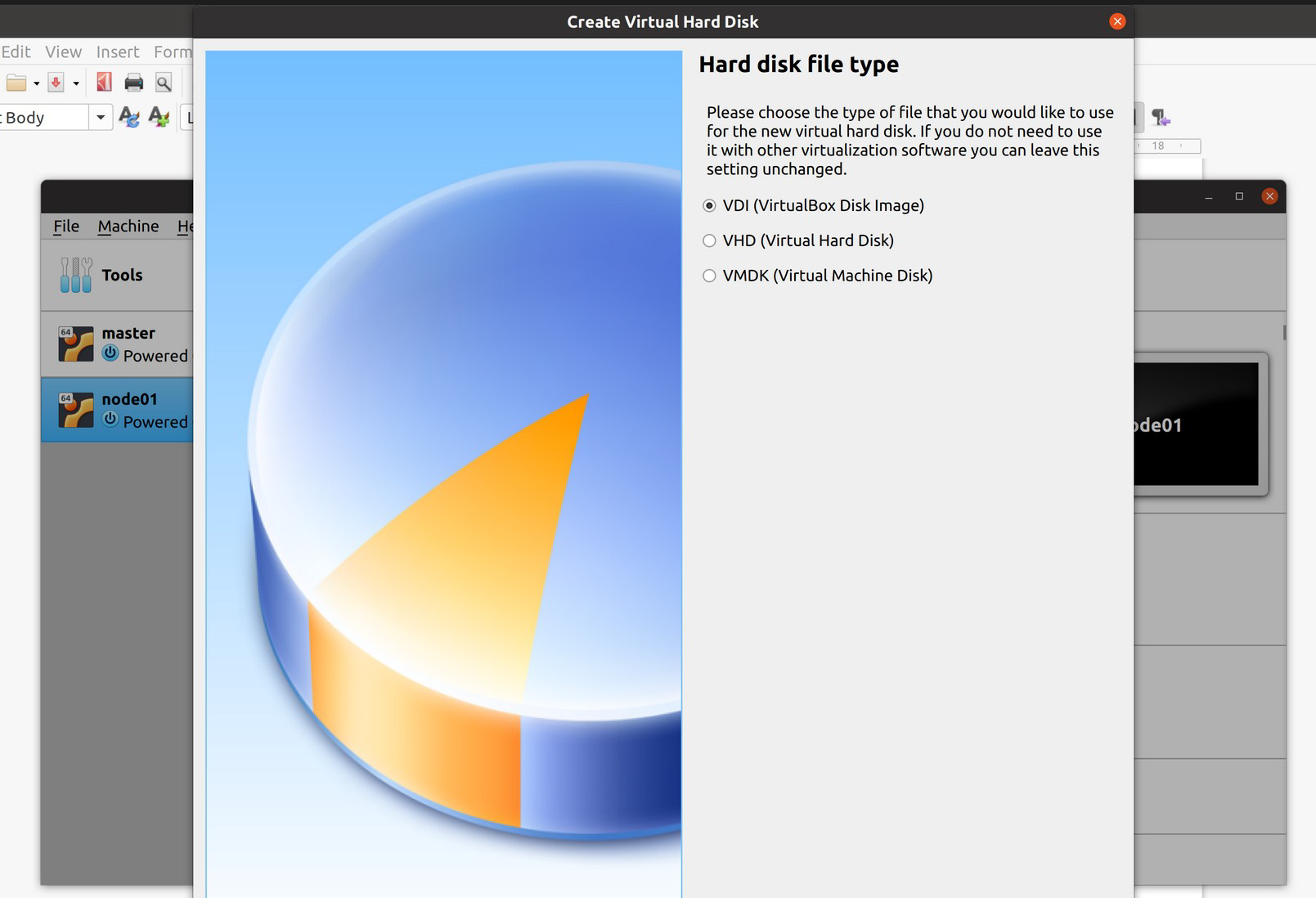 In next step choose "Fixed Size" hard disk as mentioned in below image. 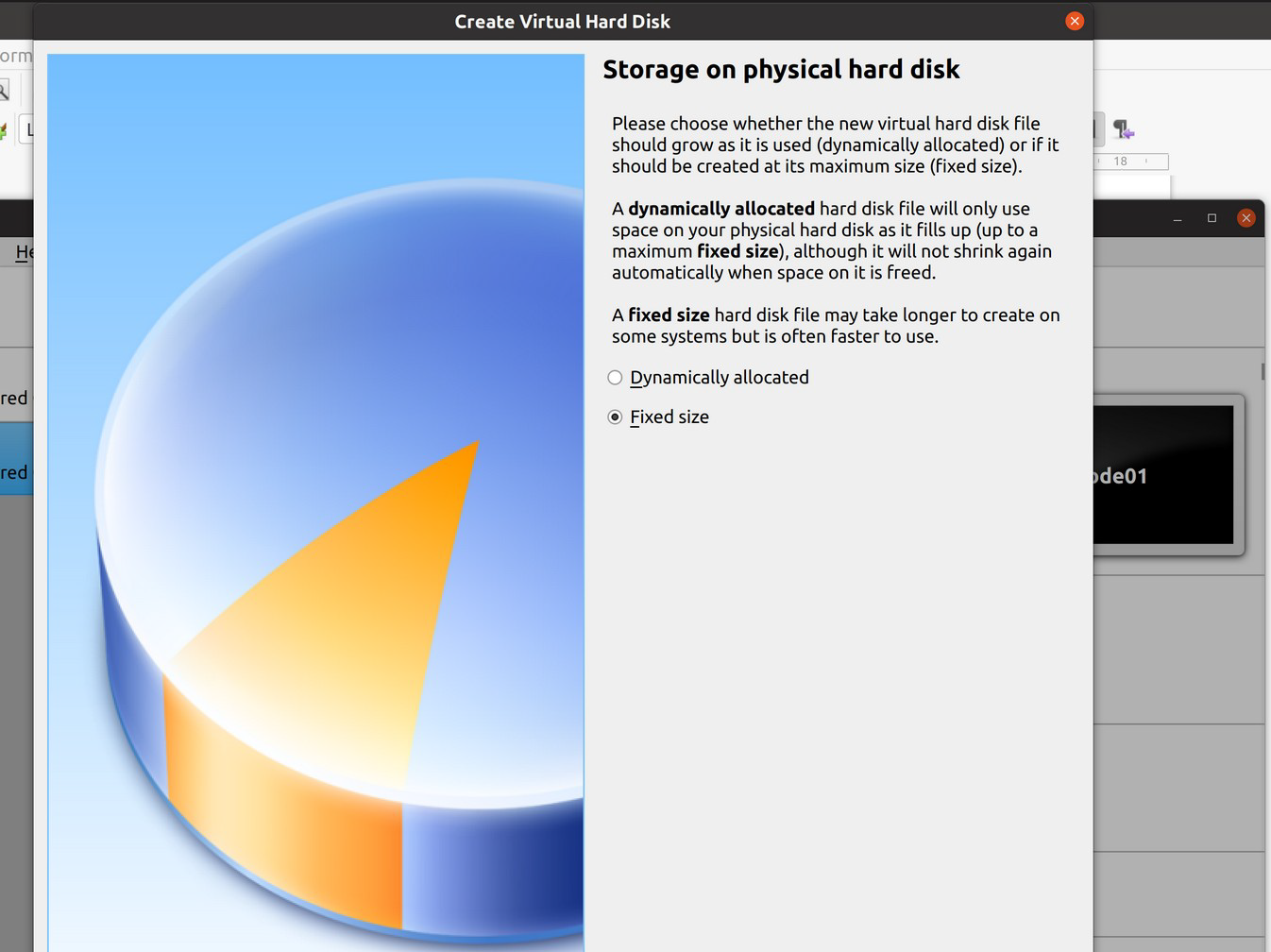 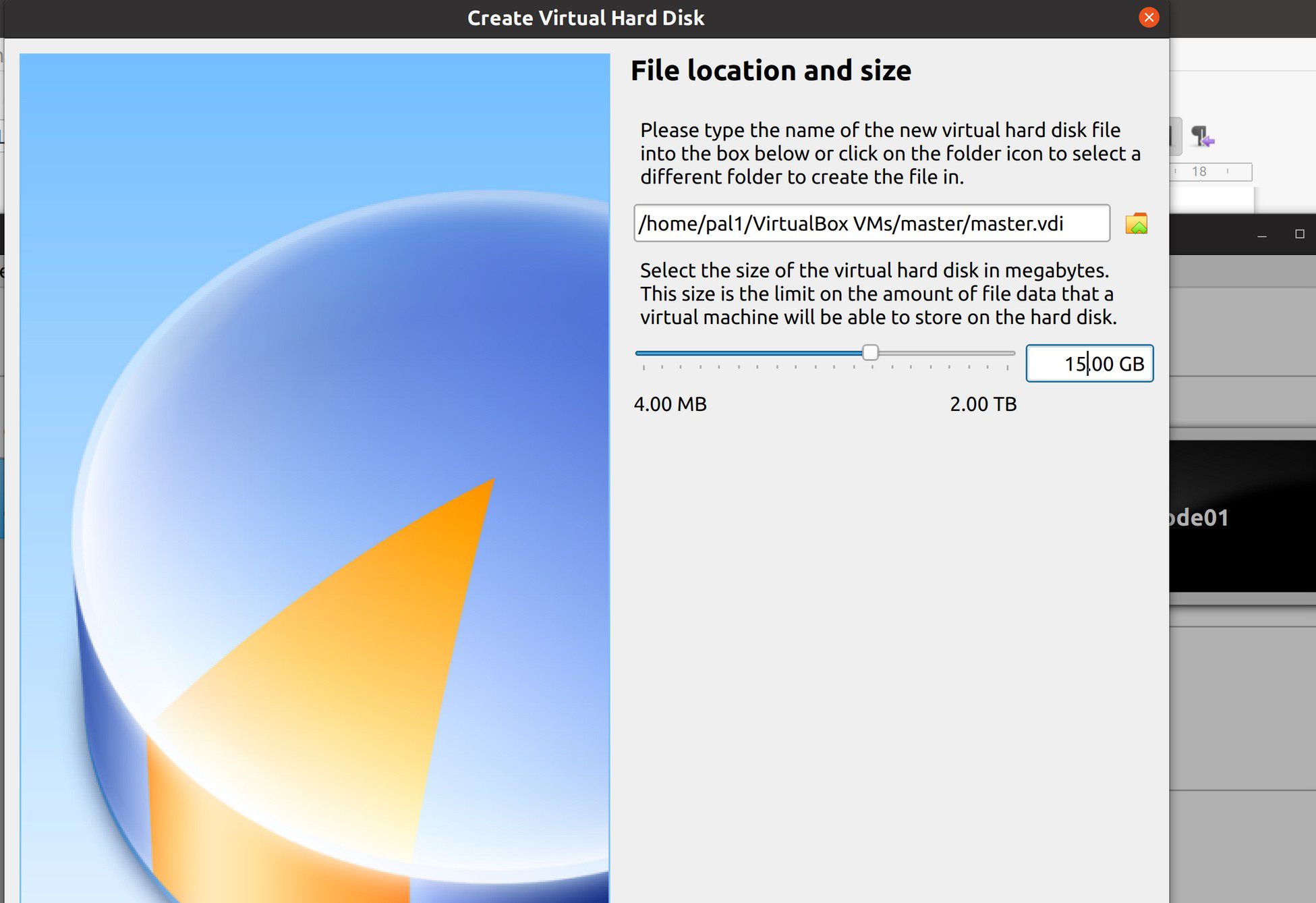 Now the VM would be displayed in the Virtual Box. We need to add the Ubuntu ISO image already downloaded to the VM. Also we need to set up the networking and add CPU.

To add the image click on the VM and choose Settings -> System -> Processor as displayed in the image and change the number of processors to 3. 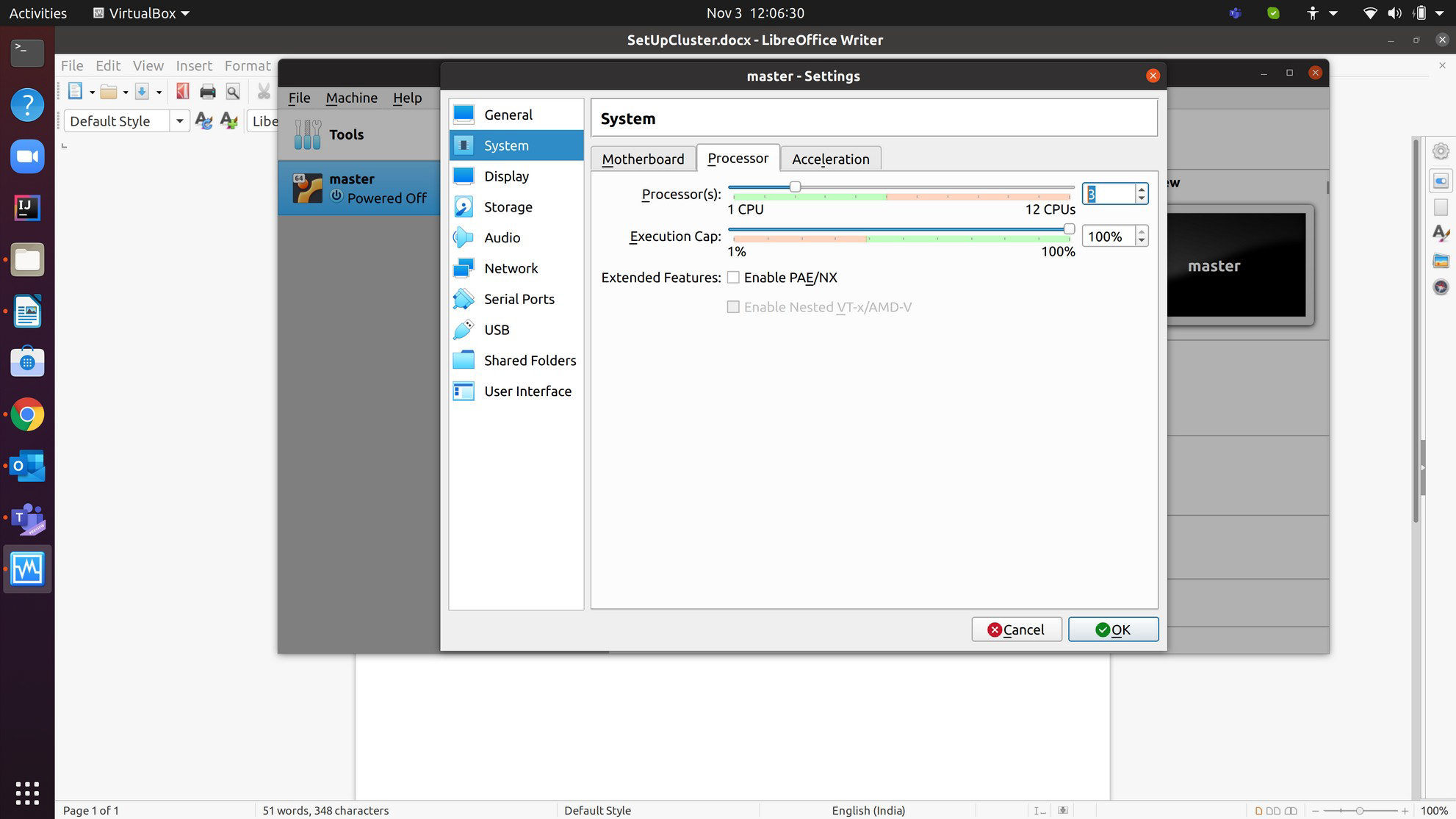 Then click on the storage option to set the ubuntu image we have already downloaded. Choose Storage -> Controller : IDE -> Empty and click on the blue CD image next to the IDE Secondary Master and select Choose/Create a Virtual Optical Disk. Select the location of the Ubuntu .iso file which will act as the image for the VM. 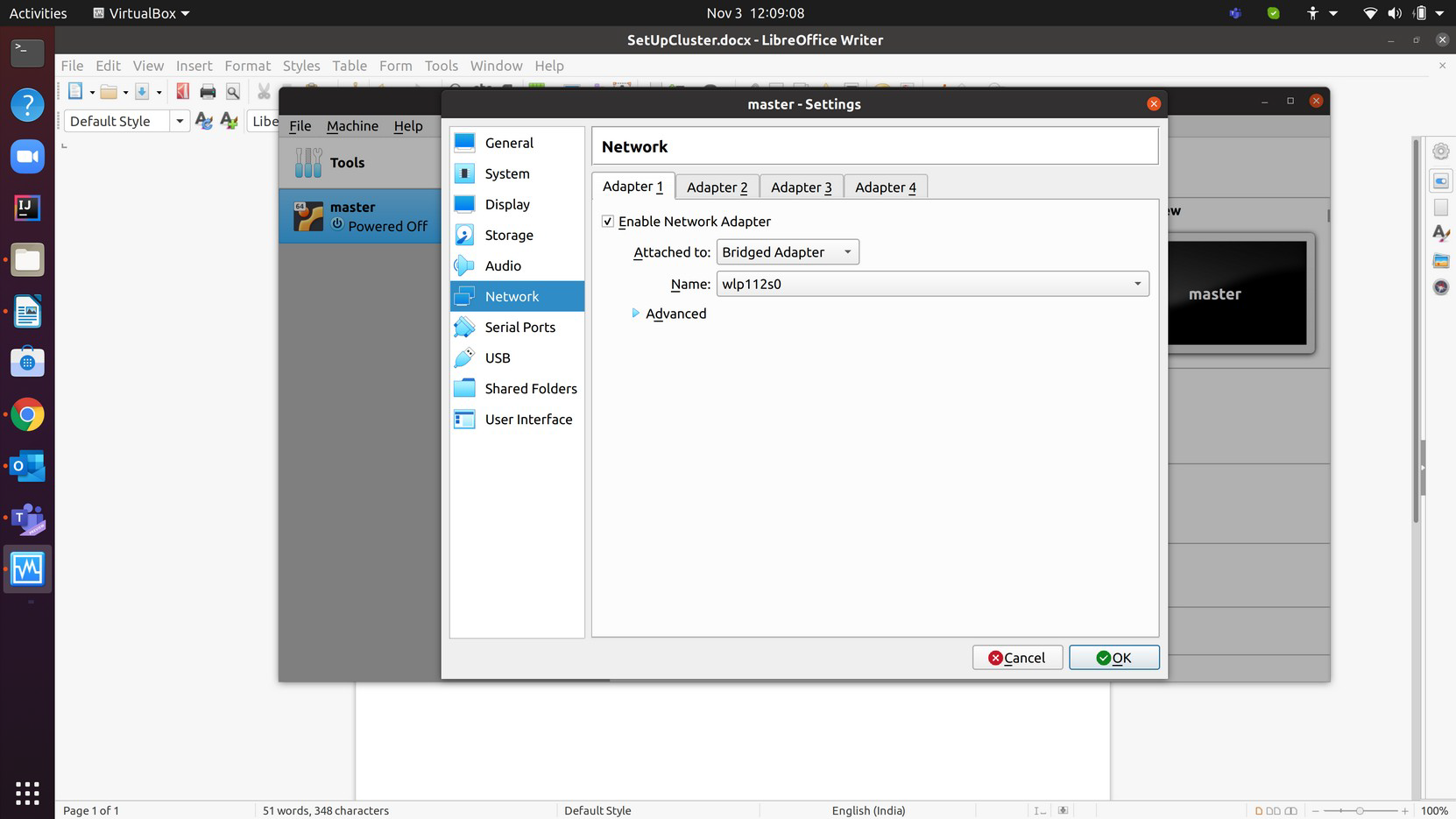 The second adapter would be attached to Host-only adapter (to give access between guest and host machines). 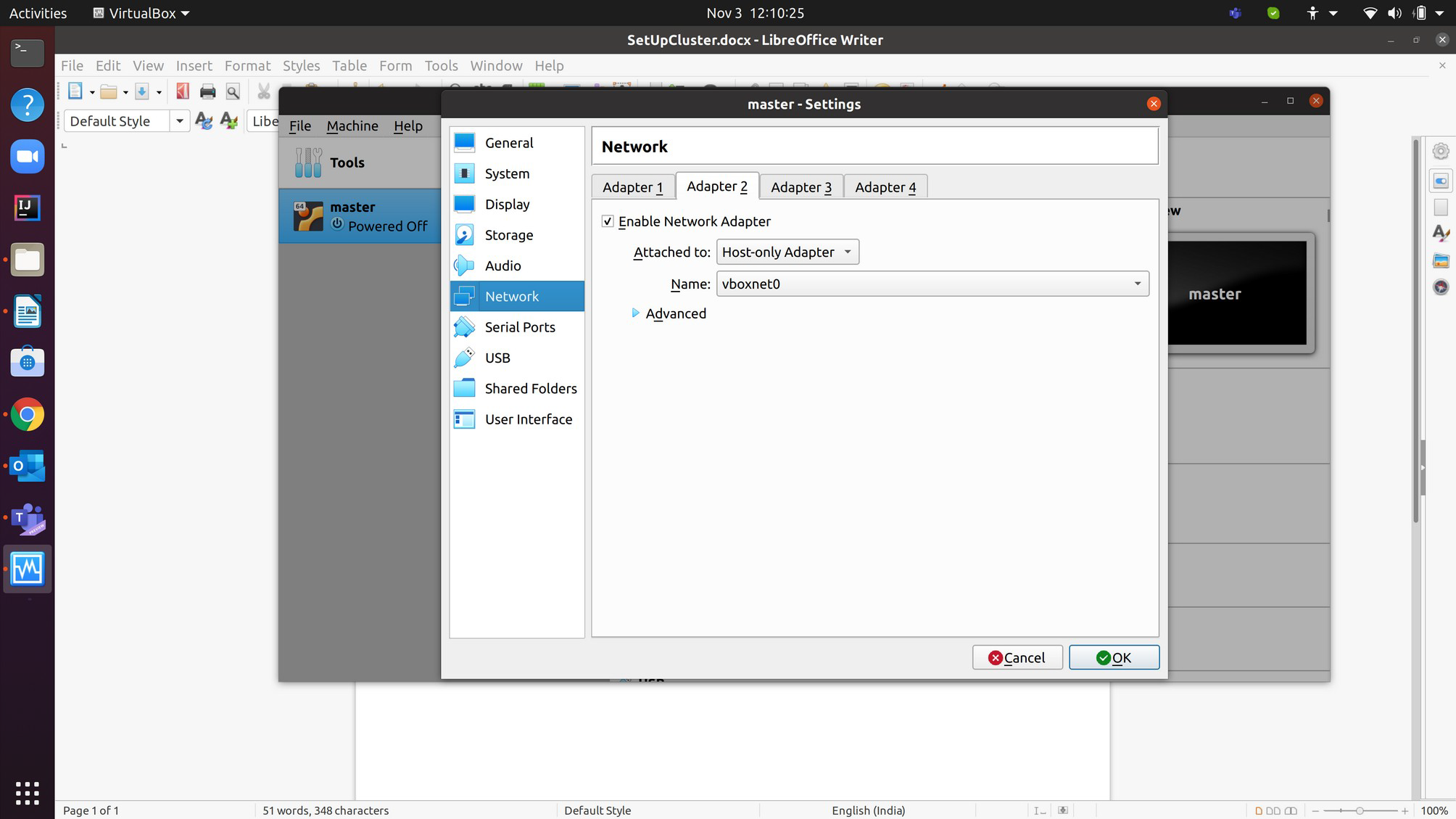 Once all these steps are completed, press the OK button. Now the hardware part of the VM is ready. In next step we have to install the ubuntu image in the VM and create user/password. To do so select the VM on VirtualBox and click start button. 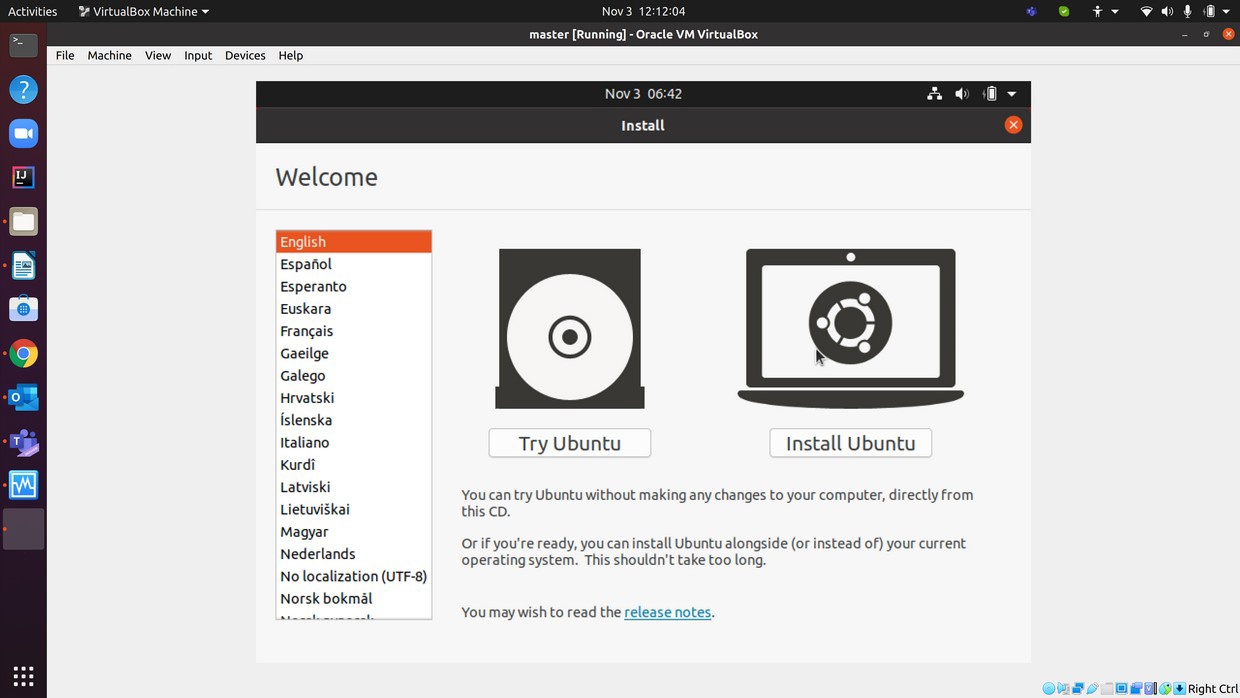 Next we need to set up few directories, install docker [container engine], kubeadm, kubelet and kubectl [kubernetes client] in the master node. All these we need to do being the super user. You need to open a terminal and execute the below commands one by one to finish the process. Please refer the kubernetes documentation to install the runtime and kubeadm.

Once the steps completed for docker installation, we would proceed for the installation of kubeadm, kubelet and kubectl. The following commands would set things up. All these commands need to be executed as super user.

Till now we have set up docker, kubeadm, kubelet and kubectl. We need to create few directories which would be required by both the master and worker nodes. These directories and files need to created as super user. Execute the below commands to create them.

Now we can stop the master VM and proceed to create the worker node.

We have already created a master node vm. We will use it create the worker node(s) instead of going through all the process of creating a new VM from scratch.

To clone the master node VM, select the VM called master and press CTRL + O which will open the clone window. You need to enter the name of the vm as node01. 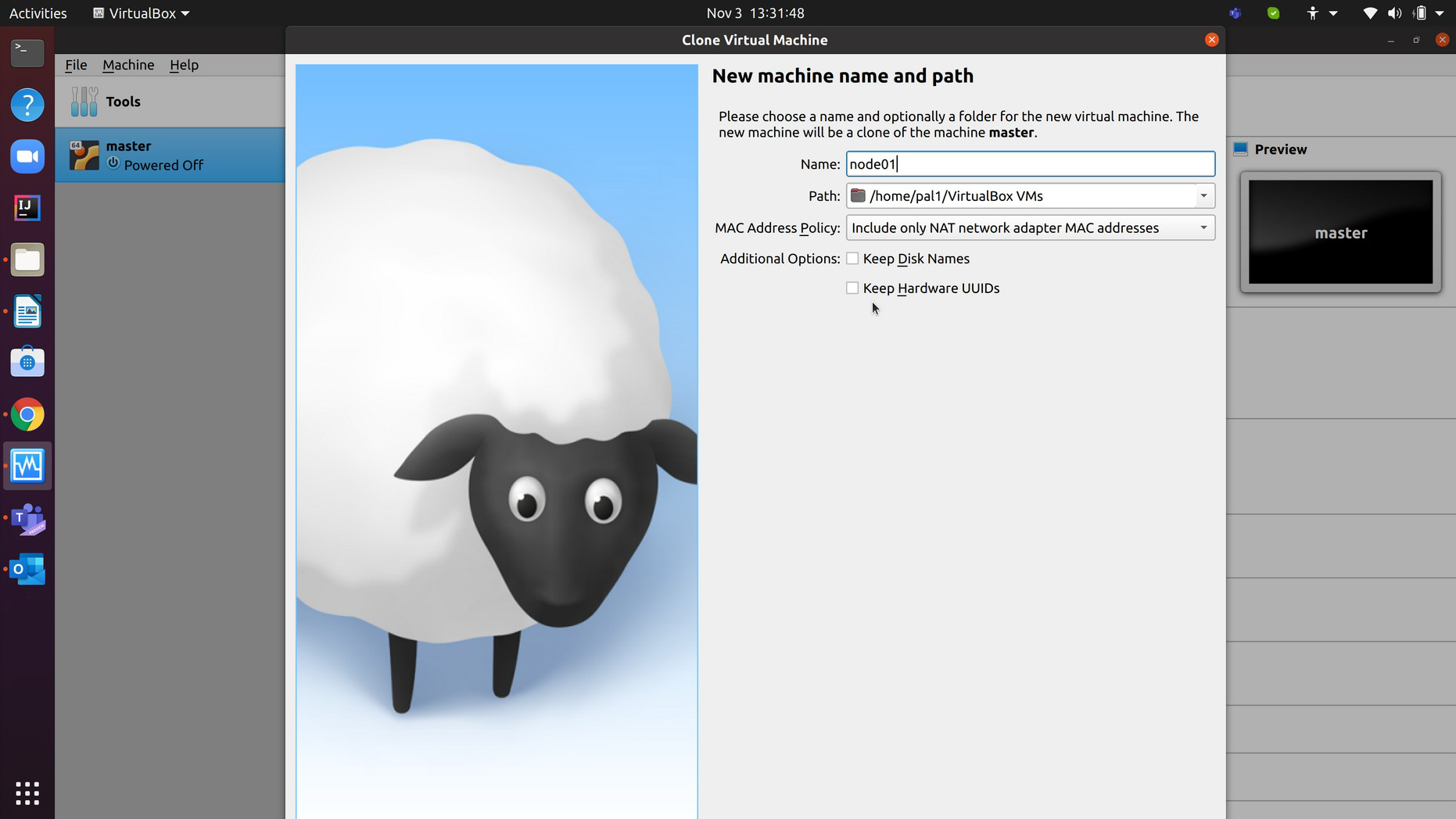 In next step choose the option as "Hard Clone" and the new node vm would be ready. Start the vm, the user name and password would be same as the master vm. We need to change the hostname of the vm to node01. This we need to do in a terminal being the super user. Open the terminal and execute the below commands in it.

The above action would change the hostname of the node from master to node01. After that stop the vm. If you want to create more nodes keep on repeating the above steps of cloning and renaming.

Next we would proceed to the master node vm to create the control plane.

Start the master vm and login. As part of creating the control plane we will create the control plane, initialize the single node cluster. You must deploy a Container Network Interface (CNI) based Pod network add-on so that your Pods can communicate with each other. Cluster DNS (CoreDNS) will not start up before a network is installed. So we will install Calico Pod network so that workloads. First check the ip address of your host machine. For linux machines you need to execute the "ifconfig" command and note down the address which starts with "192.168.x.xxx". The addresses of the vms will also have the same pattern.

You need to open a terminal and execute below commands as super user to create the kubernetes cluster, control plane and install calico network.

The last part of the output of "kubeadm join" command contains something like " kubeadm join <control-plane-host>:<control-plane-port> --token <token> --discovery-token-ca-cert-hash sha256:<hash>"

Copy the same command as we have to use that command in worker node(s) to join the control plane.

Start the worker node vm and login as master. Open the terminal, login as super user and execute the command copied from the master node vm.

After the command execution the worker node would join the control plane and pods could be scheduled on the node. If there are more than one worker node repeat the same process.

To verify if the worker node(s) joined the cluster or not execute the below command on the master node as a super user.

If all the node are ready we could create workloads on them. If the status is NotReady we need to wait for few minutes till nodes are Ready. Note down the INTERNAL-IP of both the nodes. We will access pods using the Ips. Now we need to execute the below commands to create a namespace, a deployment and a service to expose the deployment and access the application from outside the cluster. Execute the below commands in the terminal.

The output of the last command has a Port column. Note down the port which is between 30000 - 32767 from from the Port column. We can access the service using the url http://<worker-node-internal-ip:<node-port>. Open the url in the browser and try playing around the links given in the homepage.

Congratulations ! You have just deployed a multi node Kubernetes Cluster and also deployed a workload on it.

It however supports enough load and all the features of a full fledged Kubernetes Cluster. The user could upscale or downscale the cluster based on the hardware capacity of the host machine.

Published at DZone with permission of Aditya Bhuyan. See the original article here.