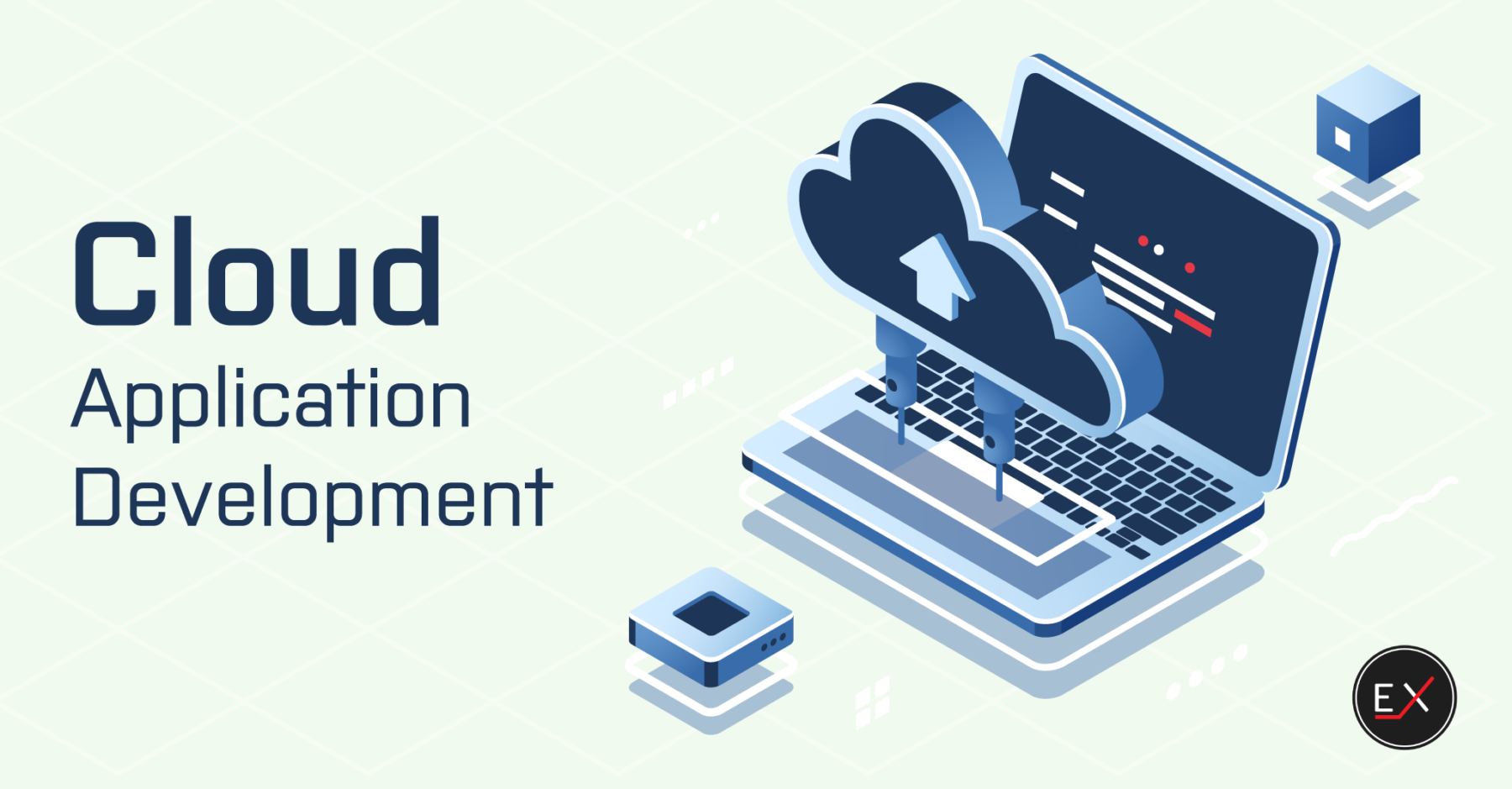 Cloud application development is a necessity in a modern enterprise world. You can hardly find a company that has never used a cloud-based application or any of the SaaS products. Cloud applications are now dominating the market over desktop software for various reasons. The main advantage is they can be accessed at any time from anywhere with any device that has a web browser. Besides, when a company develops a cloud application, it automatically means that all users are working with the same version of the app. This greatly reduces the time and resources required for new features introduction, security updates, and synchronization.

We will look at the advantages of cloud application development later in the article.

Understanding The Concept of Cloud Application

A cloud application is software that is running on the remote server and accessed by the users via a web browser or local client, that serves as a user interface for rendering the content that is processed in the cloud. Thus, a user’s device is used only to input the data, which is consequently sent to the server where it is processed and sent back to the user. Naturally, all the data is stored in the same cloud environment and can be accessed by all users that have permission. 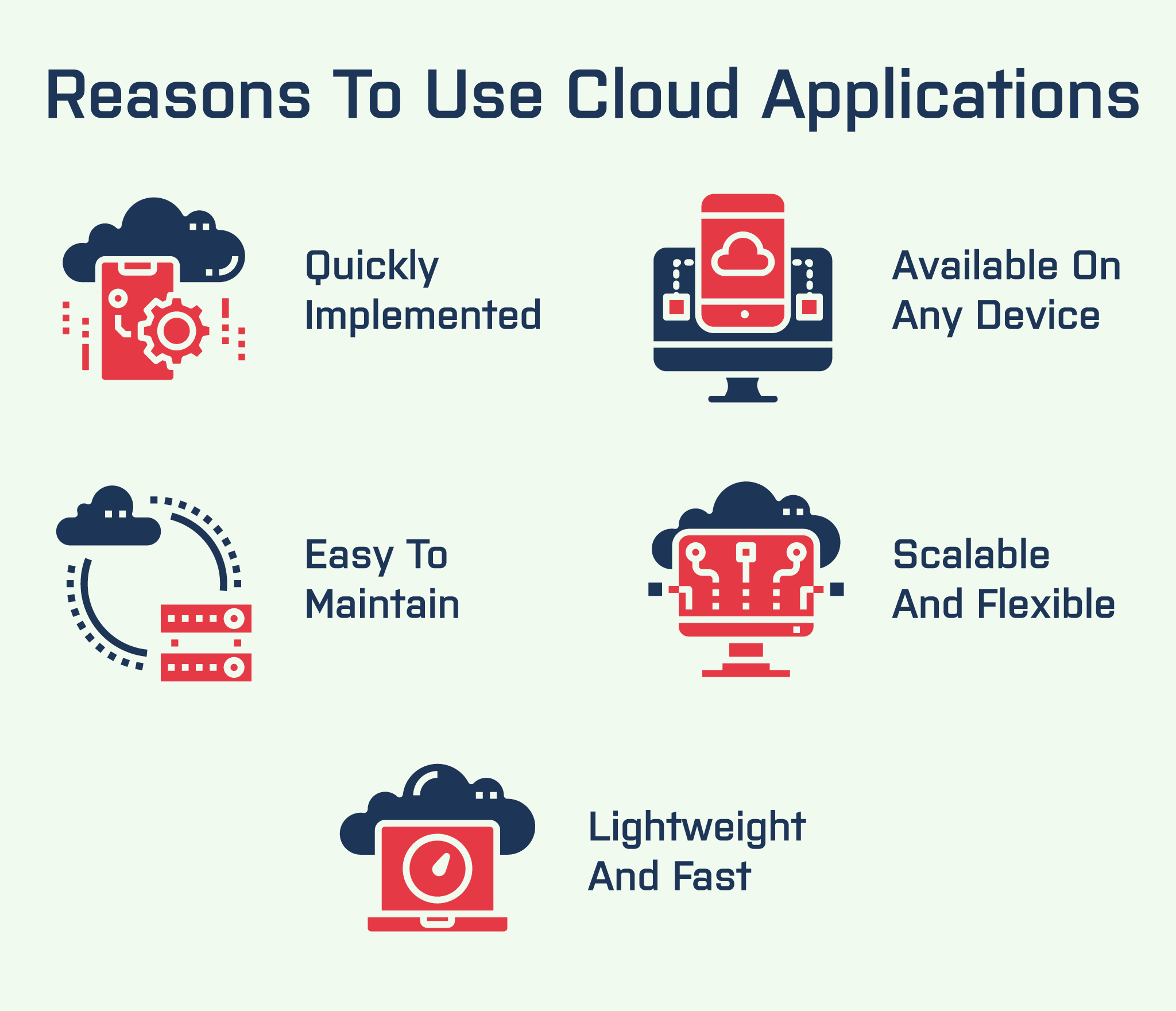 The IT market is constantly changing so it’s important to keep track of the most popular technologies. StackOverflow survey provides detailed information about the most used scripting and markup languages. Among them, there are Java, Node.js, ASP.NET, and others used for back-end development. Another part of the survey gives us statistics about the most popular JavaScript frameworks used for front-end development.

As it was already mentioned, companies choose cloud application development to reduce costs, save time, and achieve high efficiency and high performance. Many IT industry giants launched their own PaaS (Platform as a Service) products to provide ISVs and enterprises with reliable and secure cloud hosting. The choice is wide and can address the needs of cloud application development at any scale. Moreover, all of them have their own advantages and killer features. The choice of the cloud services provider is as much important as a choice of a backend or frontend technology. Besides obvious things like the cost, it impacts how easily it will be for your DevOps to work with, how scalable the app will be, etc.

Here is the list of the most popular PaaS providers:

This list may not seem very big as here are only the world-known giants. Listing less popular companies using the cloud would take an eternity. In 2020 there are almost no companies left who haven’t preferred cloud services yet.

As for the technology stack, little has changed in 2020. JavaScript is holding the top position among web technologies, while Python, Java, and PHP are the leaders among the back-end programming languages. What about the innovations, such language as Dart, is becoming more and more popular. It is now in the list of the most used languages while in 2019 only 1% of programmers employed it, and in 2018, it wasn’t mentioned in any StackOverflow statistics at all. At the same time, Swift, Kotlin, Objective-C that were used before for native development, are losing their popularity due to the same survey.

While speaking about cloud application development, it is necessary to discuss three main software delivery models:

SaaS solutions are for the end-users. It means that once a SaaS product is built and set up, it is completely ready for customers to use. They receive a ready-made product accessible from any device as long as the Internet connection is stable. and are excellent for collaborative work. Examples: Google Docs, Google Drive.

PaaS applications are mostly development environments based on various execution environments, OS, and databases. They require the application code to be deployed by the developers, and the vendor performs all the other processes. PaaS enables the fast development of scalable applications with easy private or public deployment. PaaS products include Heroku, Force.com, MS Azure, AWS, etc.

In the case of IaaS, what’s required from the customer is the middleware and support, while the vendor is responsible for data storage, virtualization, networking, and servers. A significant weakness of this option is that the customer is restricted to the provider’s tools for cloud application development. IaaS is employed by Google Compute Engine, Amazon EC2, and others.

SDLC stands for Software Development Life Cycle, and it is an indispensable part of the development process no matter what kind of software you create and what platform you develop for. Once a dedicated development team gets a task, the SDLC process begins. It implies a set of stages. Waterfall, Iterative, Agile are SDLC methodologies. Each of them affects the way the operations are performed but regardless of the model, the sequence of stages mostly stays the same. 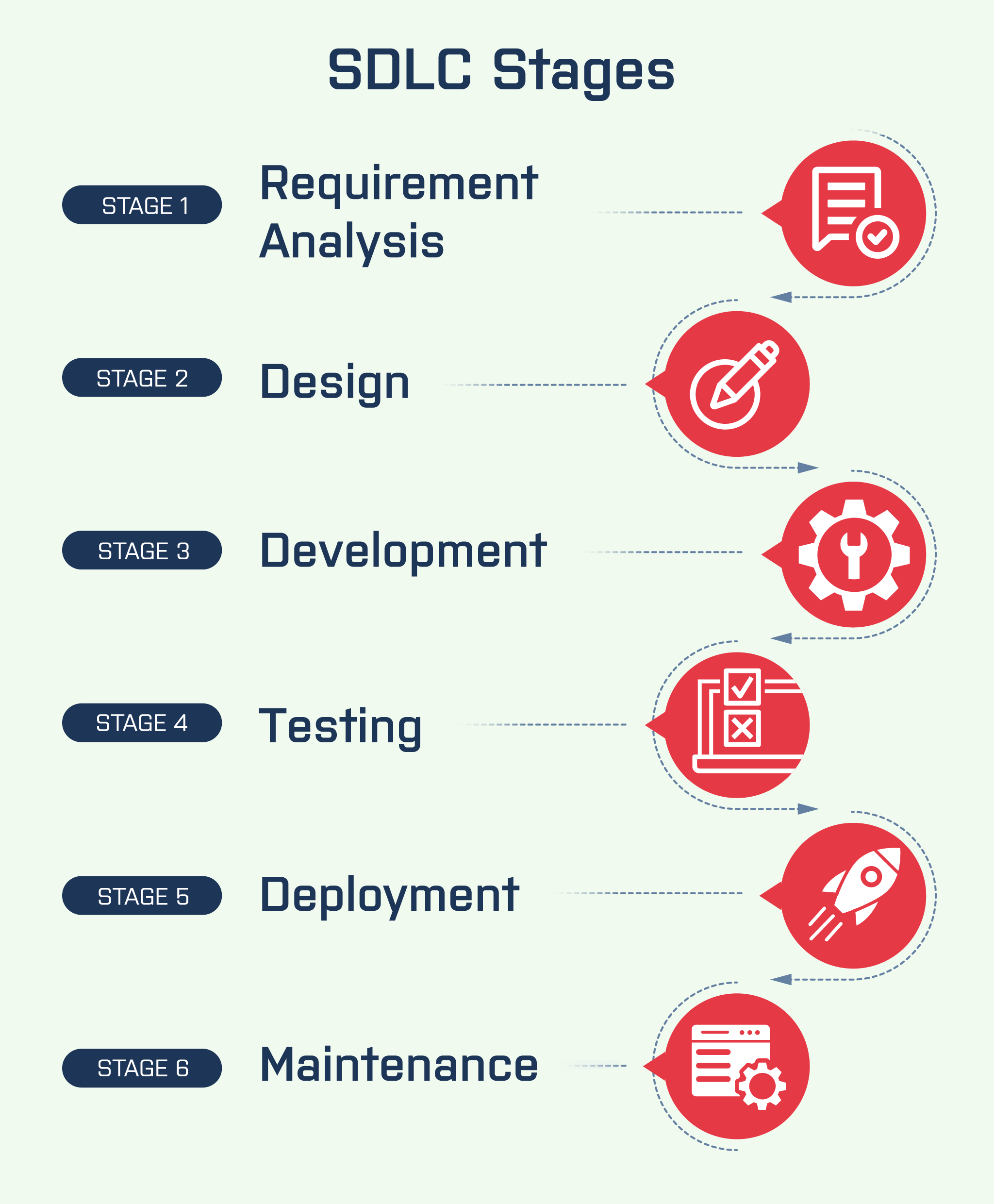 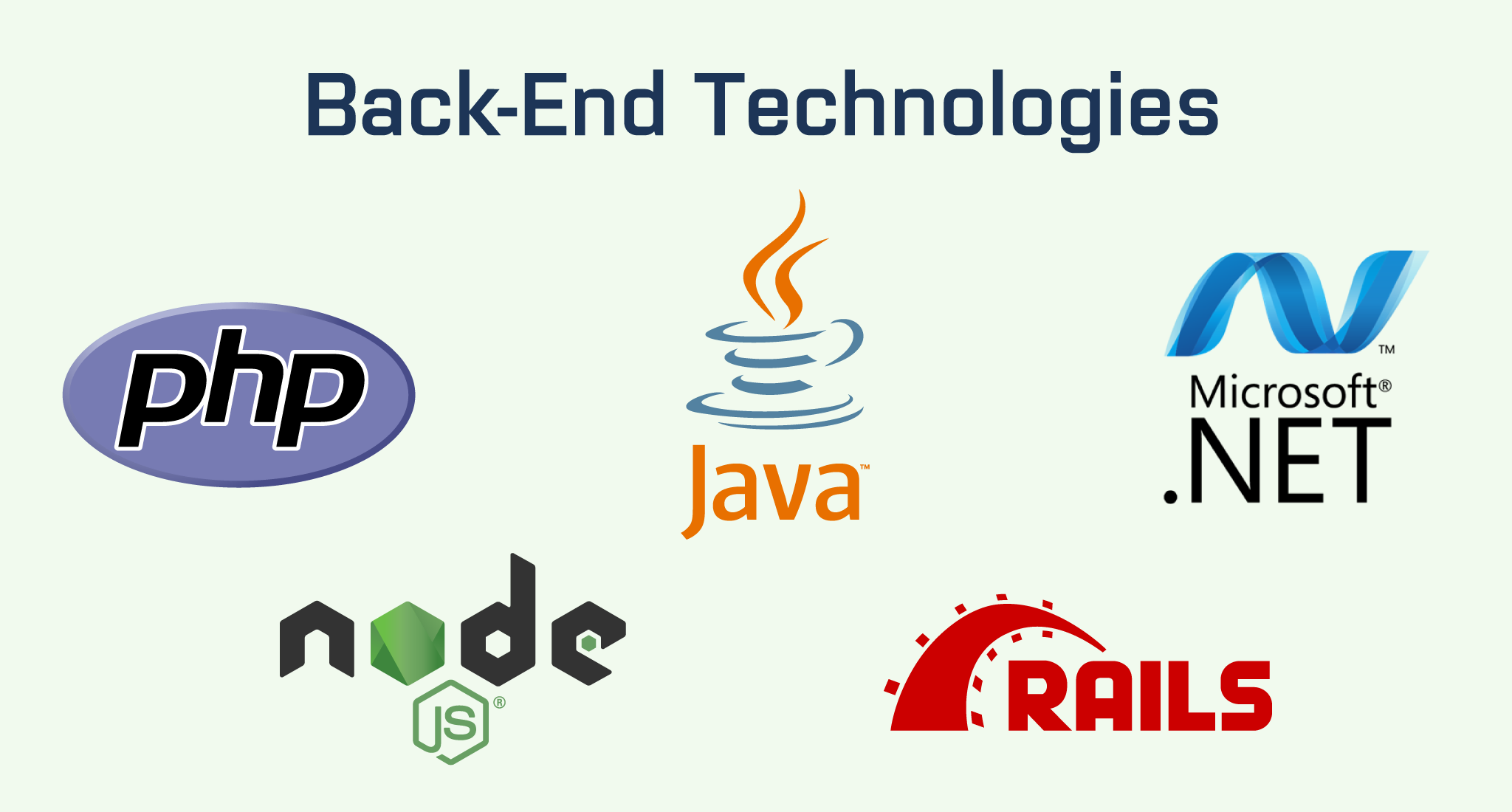 From year to year, the technology stack for backend development doesn’t change that much so let’s see what languages and tools take the leading positions.

.NET is a hybrid framework developed by Microsoft. It gives programmers the opportunity to work with different languages, libraries, and tools for building scalable web, mobile, and desktop applications. Among the languages .NET supports, there are C#, Visual Basic, and F#. It also has its own package manager – NuGet, which contains more than 90000 packages. .NET allows working with those cloud servers that already exist as well as creating and deploying your own. Thus, it is a powerful tool for cloud application development.

Java is a mature versatile multipurpose programming language created back in 1995. During these years, Java has earned the trust of IT specialists all over the world. Object-oriented class-based language can be implemented in the cloud, mobile, desktop, and web application development. It has tons of advantages such as well-defined specifications, expected behavior, which results in reduced development time, a huge number of tools and libraries, the fact that Java apps can be run on any device regardless of its underlying architecture, and many others.

Java is suitable for enterprise-level projects that require difficult computations and data processing. However, despite all the advantages, Java developers are rather expensive, and employing this language for the startup is considered unseemly.

PHP is designed for creating software in a great variety of domains. Because its code is processed on the webserver with a specific interpreter, it makes PHP an excellent choice for custom cloud app development. It is most commonly employed for mid-sized projects or startups. It has a 5 million supportive community of developers, which will help you solve appearing problems on the stage of learning or later. By the way, quite clear documentation eases the learning process. The popularity of PHP results in a great number of potential specialists to hire, and for a relatively affordable price.

As database integration is one of the key aspects of backend development, it makes PHP one of the best options as it connects to a wide range of databases such as MySQL, PostgreSQL, Redis, MongoDB, and others. In addition, hosting services for PHP are quite cheap because the components that a PHP app uses (MySQL database, HTTP server, etc.) are free.

Node.js is an open-source runtime environment that executes JavaScript codes. Its specificity is in unifying the whole software development process around a single language – JavaScript instead of using numerous technologies for back- and front-end. Filling the gap between server and client-side saves such important resources as time and money. Node.js allows building highly scalable applications with great performance. It is especially great for creating high-traffic enterprise apps including demanding games or chats. It has a wide range of frameworks that eases the work.

One more thing that makes Node.js extremely popular among aspiring developers is that it is quite easy to learn, especially considering a large supportive community.

Ruby on Rails is an application framework used for backend development. It targets simple development. It is relatively easy to master due to the English-like syntax and understandable documentation. This simplicity results in minimized development time. High readability leads to easier updates and maintenance, which, in turn, makes RoR development extremely cost-effective. In addition, Ruby on Rails has many testing frameworks cut out exactly for it, which makes testing faster and easier.

One of the most popular JavaScript frameworks is Angular. It was released in 2016 but its quality has already been recognized in the IT community. It is built on the basis of TypeScript by the same team that created AngularJS in 2010. In contrast to its predecessor, Angular has easier component-based architecture as well as JavaScript, its system is more modular, and it enables asynchronous compilations.

However, this technology is not often chosen by aspiring specialists as the learning curve might be a little complicated in spite of good documentation and a supportive community. The fact that Google uses Angular itself in such solutions as Google Cloud Platform, or AdWords, proves its quality.

React.js, simply called React, is an open-source framework, especially popular for cloud application development. It is a JavaScript library that is initially designed for building single-page solutions. It was created by Facebook in 2013 and was at once employed in the Facebook newsfeed and Instagram. React aims at being simple, still fast, and highly scalable. Its specificity is reusable UI components, which save a lot of time and energy for rebuilding the whole application if something goes wrong.

As for time-saving, it also provides server-side rendering without updating the page. In addition, React has a smooth learning curve unlike some other JS frameworks, which makes it easy to learn for those who have тever worked with JavaScript.

Vue.js is one more open-source JavaScript framework created in 2014 by Evan You. It is a solid option for cloud app development, single-page solutions, or website building. The fact that its component library is based on HTML/CSS/JS makes Vue.js extremely easy to master as every web and cloud developer has definitely worked with these three core technologies. The documentation of high quality also eases the process of learning. It is also highly flexible. This provides the possibility to build SPAs (single page applications) as well as some individual interactive components that can be easily integrated with the help of some other technology.

Choosing cloud development is reasonable, as it will result in fast, scalable, and secure applications with high performance. The fact that it’ll help save time and costs is also a key factor while deciding on an application type. The approach to development has changed for the better and became easier due to the innovative tools, technologies, and versatile SDLC methodologies.