Testing an asset is a crucial phase for most human activities. As humans, we are able to define very complex algorithms and to design intricate domains with several different possible states. There are no boundaries on what we can create and design. On the other side, as humans, we make mistakes. It represents the main friction to our creativity. Usually, during a creative activity, questions like the following may arise:

A reasonable answer for these questions is to create and rely on a strong Testing phase. In my previous article, I described how to create a DMN asset to include a PMML file. How can we actually check if the resulting DMN file satisfies our expectations? Our Kogito Tooling suite now offers the Test Scenario editor, a tool already present in Business Central, which enables DMN Editor users to test their created DMN files.

Consequently, the aim of this article is to guide you through a step-by-step tutorial describing how to create and use the Test Scenario editor to test the DMN file previously created.

Here, required elements for this guide:

Cloning and Using Our Example

Exactly in the same way described in my previous article, we need to clone kogito-examples repository, open your VSCode editor and go to the kogito-examples/dmn-pmml-quarkus-example directory, which contains the covered example. As a result, you should see the project open in VSCode, as shown in the below screenshot: 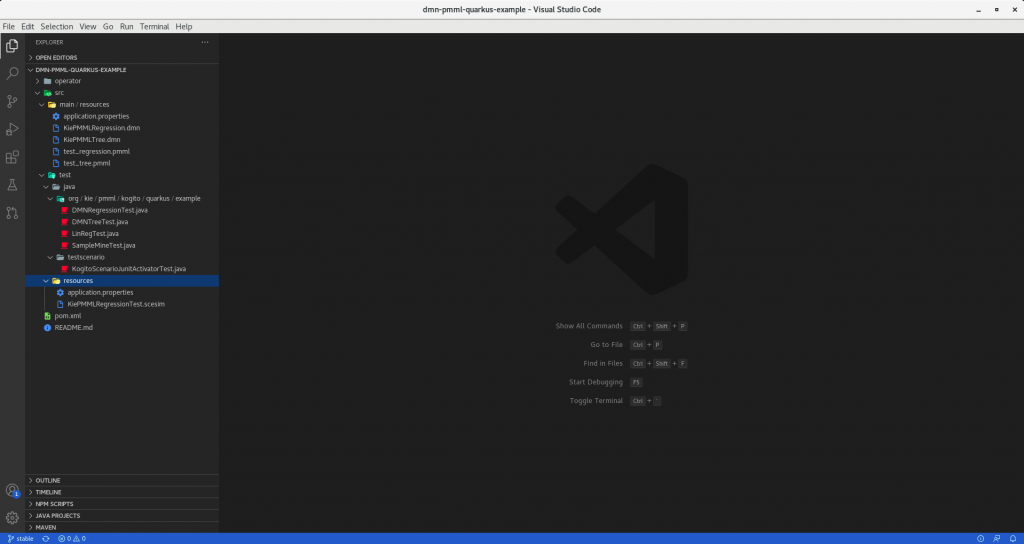 The resulting project contains all required files and prerequisites for this tutorial.

In case we want to create a new project from scratch, we need to focus on four mandatory prerequisites required to correctly use the Test Scenario:

Great! All prerequisites are now set, therefore we are now ready to create our first Test Scenario file! As previously mentioned, the goal is to create a Test Scenario to test “KiePMMLRegression.dmn” DMN asset. Here, the steps:

Excellent! It’s now time to run the Test Scenario file, in order to verify the filled scenario is correct.

A maven build will start and during its test phase, all defined scenarios will be verified using the Test Scenario runner. With previously filled data, the four defined scenarios should pass successfully as shown in the screenshot below:

With this article, we learned how to test a DMN asset using a Test Scenario Editor, part of the DMN Editor VSCode plugin. Undoubtedly, it represents a valid tool to support the creation and the analysis of your DMN assets, which should be strongly considered to increase their robustness and reliability.