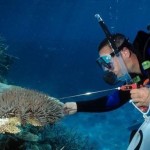 drone technology is increasingly popular for environmental monitoring and protection.  for instance, project premonition is a microsoft project that is using drones to monitor the environment for infectious diseases to try and provide a better warning system.

meanwhile researchers in texas are using drones on the farm to help monitor crops and even the fertility of the soil.

now, researchers at the queensland university of technology have developed a robotic device that is designed to help protect the famous great barrier reef.

the device, known as cotsbot, trawls the bottom of the sea in search for something called the crown-of-thorns starfish (cots).  the starfish is known to feed on the corals that underpin the rich ecosystem, so when starfish numbers boom, the reef is put under significant strain.  it’s estimated that the species is responsible for up to 40% of the decline in coral cover.

the robot is fitted with sophisticated monitoring software that the researchers have trained to hunt down cots.  whilst it can do much of this automatically, if it captures an image it’s not sure on, it can send it to the human team for a second opinion.  the device is then capable of learning from this input so it becomes wiser for next time.

when a starfish is found, the cotsbot delivers a lethal salt injection into the creature via a pneumatic arm.  this is replacing the work of human divers who would have traditionally had to do this one by one.

“human divers are doing an incredible job of eradicating this starfish from targeted sites but there just aren’t enough divers to cover all the cots hotspots across the great barrier reef.

“the cotsbot becomes a real force multiplier for the eradication process the more of them you deploy – imagine how much ground the programs could cover with a fleet of 10 or 100 cotsbots at their disposal, robots that can work day and night and in any weather condition.” the team say.

it’s certainly a fascinating project with some big implications for the health of our oceans.  check out the video below to see cotsbot in action.