the content of this article was originally written by tony hirst on his blog, ouseful.info

sometime last week, @mediaczar tipped me off to a neat recipe on the wonderfully named drunks&lampposts blog, graphing the history of philosophy , that uses gephi to map an influence network in the world of philosophy. the data is based on the extraction of the “influencedby” relationship over philosophers referred to in wikipedia using the machine readable, structured data view of wikipedia that is dbpedia.

the recipe given hints at how to extract data from dbpedia, tidy it up and then import it into gephi… but there is a quicker way: the gephi semantic web import plugin . (if it’s not already installed, you can install this plugin via the tools -> plugins menu, then look in the available plugin .)

to get dbpedia data into gephi, we need to do three things:

fortunately, we don’t have to work out how to do this from scratch – from the semantic web import configuration panel, configure the importer by setting the configuration to dbpediamovies . 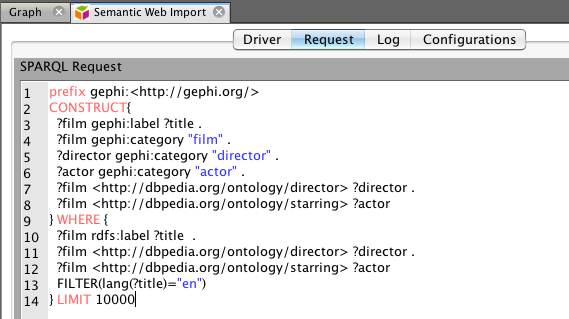 we need to do some work creating our own query now, but not too much – we can use this dbpediamovies example and the query given on the drunks&lampposts blog as a starting point:

the graph we are going to visualise will have nodes that are philosophers or the people who influenced them. the edges connecting the nodes will represent that one influenced the other, using a directed line (with an arrow) to show that a influenced b, for example.

the following construction should achieve this:

(the limit argument limits the number of rows of data we’re going to get back. it’s often good practice to set this quite low when you’re trying out a new query!)

hit run and a graph should be imported: 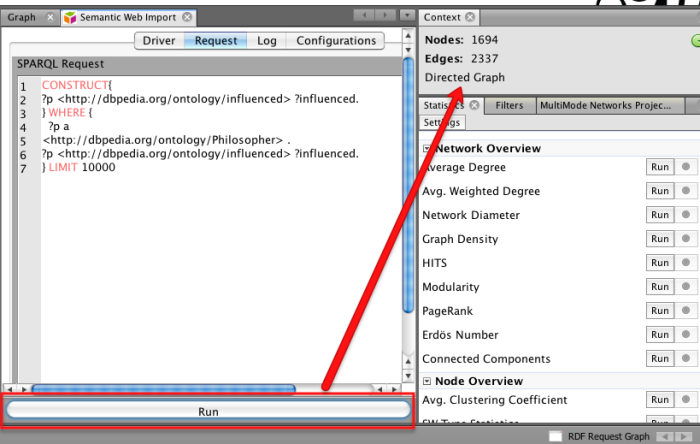 if you click on the graph panel (in the main overview view of the gephi tool), you should see the graph: 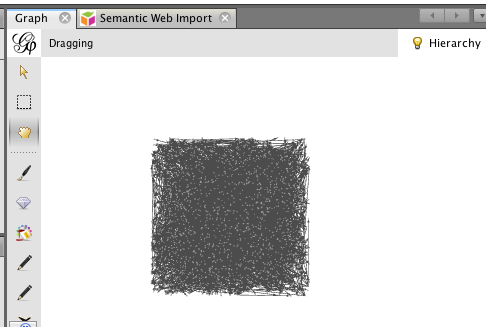 if we run the pagerank or eigenvector centrality statistic, size the nodes according to that value, and lay out the graph using a force directed or fruchtermann-rheingold layout algorithm, we get something like this: 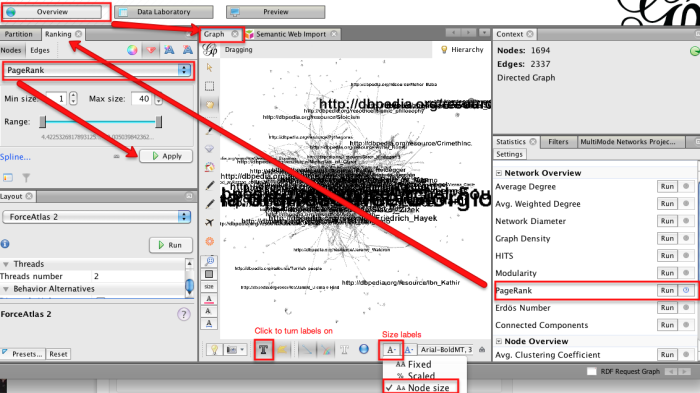 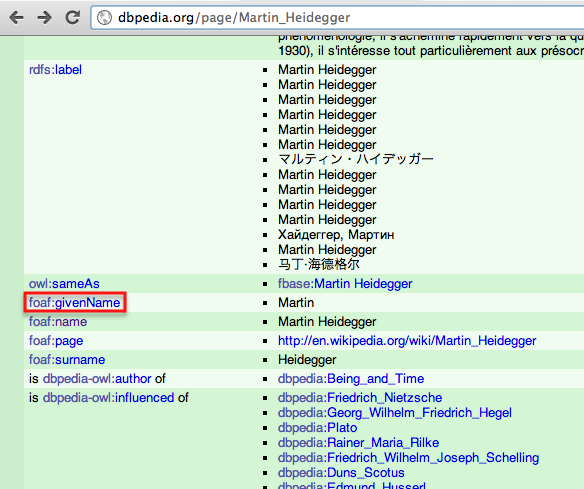 in particular, we see we can get hold of the name of the philosopher using the foaf:name property/relation. if you look back to the original dbpediamovies example, we can start to pick it apart. it looks as if there are a set of gephi properties we can use to create our network, including a “label” property. maybe this will help us label our nodes more clearly, using the actual name of a philosopher for example? you may also notice the declaration of a gephi “prefix”, which appears in various constructions (such as gephi:label ). hmmm.. maybe gephi:label is to prefix gephi:<http://gephi.org/> as foaf:name is to something? if we do a web search for the phrase foaf:name prefix , we turn up several results that contain the phrase prefix foaf:<http://xmlns.com/foaf/0.1/>, so maybe we need one of those to get the foaf:name out of dbpedia….?

and then using this name as a label in the construction:

we can also do a similar exercise for the person who is influenced.

looking through the dbpedia record, i notice that as well as an influenced relation, there is an influencedby relation (i think this is the one that was actually used in the drunks&lampposts blog?). so let’s use that in this final version of the query:

now run the query into a newly launched, pristine workspace, and play with the graph to your heart’s content…:-) [i'll maybe post more on this later - in the meantime, if you're new to gephi, here are some gephi tutorials ]

here’s what i get sizing nodes and labels by pagerank, and laying out the graph by using a combination of force atlas2, expansion and label adjust (to stop labels overlapping) layout tools: 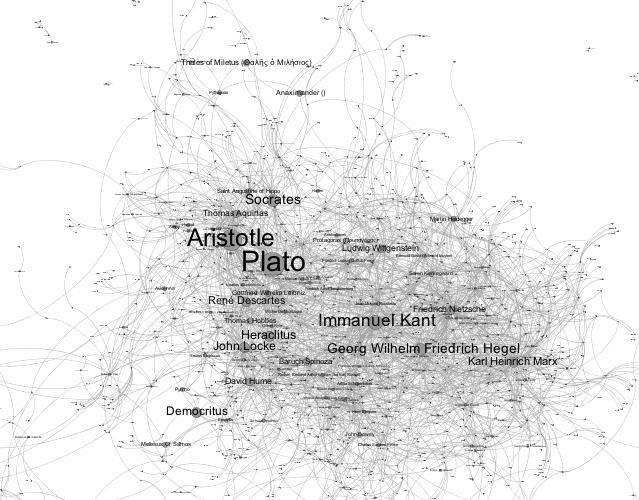 using the ego network filter, we can then focus on the immediate influence network (influencers and influenced) of an individual philosopher: 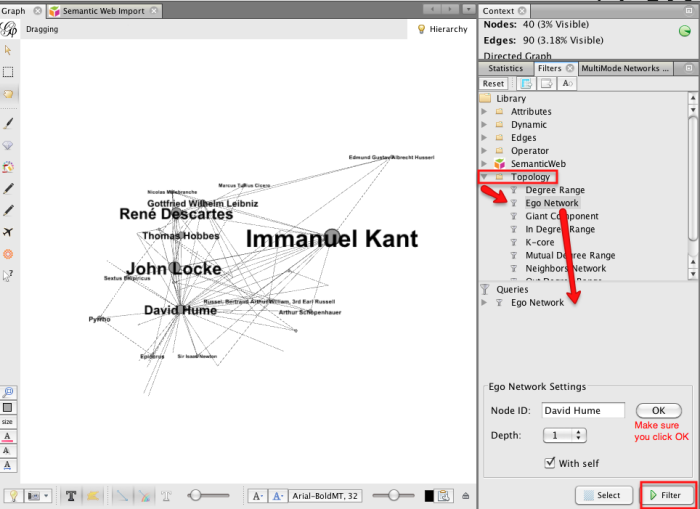 what this recipe hopefully shows is how you can directly load data from dbpedia into gephi. the two tricks you need to learn to do this for other data sets are:

if you come up with any other interesting graphs, please post request fragments in the comments below:-) 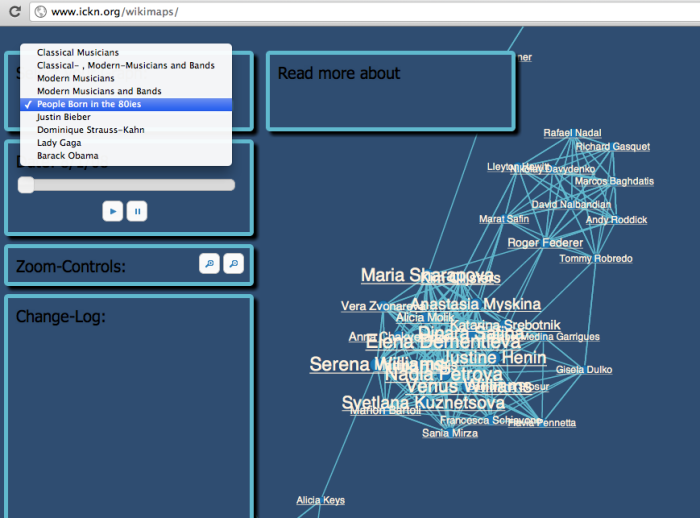 any other related tools out there for constructing and visualising wikipedia powered network maps? please add a link via the comments if you know of any…

pps for a generalisation of this approach, and a recipe for finding other dbpedia networks to map, see mapping how programming languages influenced each other according to wikipedia .