The HTML5 Web Sockets represent the next evolution of web communications. A WebSocket is a full duplex, bidirectional communication channel that operates over a single TCP socket. It has become a standard for building real time web applications. In ColdFusion 10, a messaging layer has been provided that implements the Web Socket protocol. It enables you to build applications that are based on publisher/subscriber model and applications that are based on subscriber model wherein a push from a server is possible. 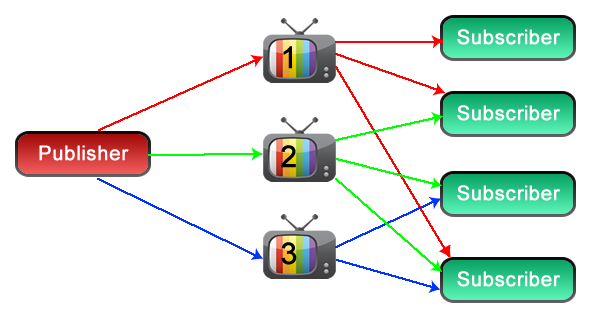 To implement the broadcast based approach in ColdFusion, you can specify the channel details in Application.cfc file, use the new tag - cfwebsocket to create a websocket and then send, receive and manage the connection through various JavaScript functions.

The websocket channels through which the communication takes place between the publisher and subscriber is specified in the wschannels variable. As observed in the above code snippet, the channel names are specified in a struct. Optionally, you can also specify the cfclistener key which contains channel listener functions for each channel (I plan to cover this workflow in my next post).

To create a websocket, the cfwebsocket tag is used:

The cfwebsocket tag will establish a connection with the WebSocket Server and the server will respond with a ‘Welcome’ message; acknowledging the publisher or subscriber that the connection has been established. As observed in the above code snippet various handlers are specified. These are JavaScript functions that the user has to implement. The onMessage handler (messageHandler in code) is called when the server responds with a message or when a data is received through the subscribed channel. The complete workflow is as shown below: 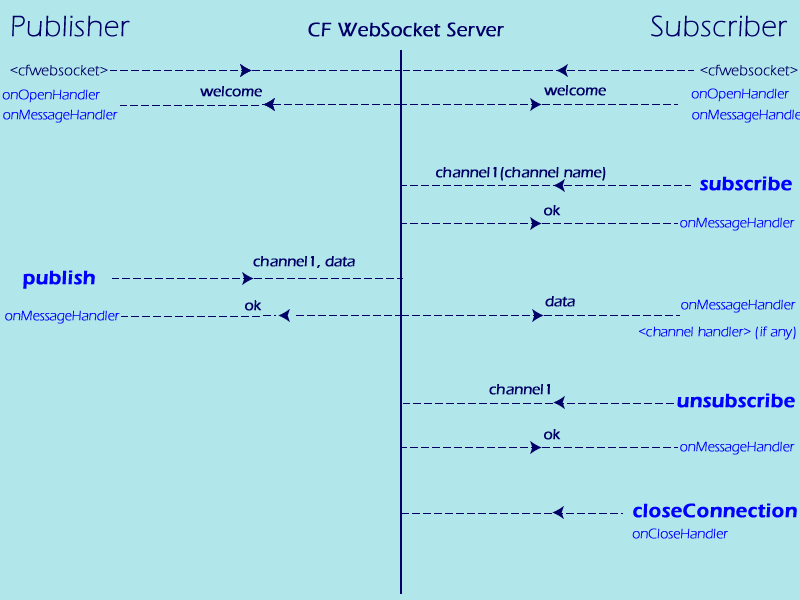 Once a connection is established with the server, the websocket object is then used to manage the connection. Here is list of JavaScript functions (please note this is not a complete list, only those relevant to the example are mentioned):

By default, a connection is established with the server when the cfwebsocket tag is specified in the page. If the user chooses to close the connection (see closeConnection function below) and then establish again, then this function should be called on the socket object. Example:

The publisher can send data through a channel using the ‘publish’ method. The Server acknowledges this action by sending an acknowledgement to the publisher. The third argument of the publish method is a struct containing the publisher information. Again this is an optional argument. Example:


I have created a sample application, you can download it here. Open two browser instances and run the cfm file. You’ll be able to see the communication taking place between the two instances when some message is sent through the channel.