In the last blog, we compared the two libraries at a high level. Now, we are going to see how they are used with some code examples.

The example used here is from this Spring tutorial. This is a famous bookstore sample app.

Before we get started, please make sure you follow the steps in the original documentation to download and set up the sample app.

We can re-use the example with some modifications. Sentinel is part of the most recent Spring Framework release. So, there is no additional dependency change.

Let’s directly go to reading/src/main/java/hello/BookService.java and paste the following code:

As you can see, all we did was replace the @HystrixCommand annotation with @SentinelResource. Thevalue attribute labels the method we would like to apply to the circuit breaker. And thefallbackattribute points out the fallbackMethod function. Then. we add thefallback function  reliable() . The function does the same as in the example.

Sentinel, on the other hand, gives that control to the user, which means that the user has to create a rule to define that condition. Let’s do that and add the rule. It can be appended to the end of the file.

We just created a DegradeRule, setting the mode to be exception ratio, the threshold to 0.5 (1 out of 2), and the recovery time to 10 seconds. The DegradeRuleManager will load this rule to take effect.

Let’s try it out: We only start the Reading Service but not the Bookstore service. So, every time a request comes in, it will fail. After two attempts (and two failures), we shall see the fallback function kick in:

Now, let’s start the Bookstore service. After 10 seconds, we shall see the normal response:

In a production environment, it is actually easier to use the Sentienl dashboard to configure this rule than adding the rule via code. Here is a screenshot:

So far, we’ve looked at the same feature as Hystrix has performed. And actually, Sentinel needs one more step. But here is the justification: users can achieve more with that flexibility. Now, let's see an example.

Sentinel allows rules to be based on different metrics. In this example, we are using QPS.

We added a @SentinelResource,  but instead of the fallback function, we use theblockHandler  function. This function will simply print out a message showing “Sentinel in Action.” Now, we need to add a new rule when this function will be triggered:

The rule will apply when we have more than 1 request per second. This piece of code can be appended to the end of the file.

After we start the BookStore service, with the first request, we shall get the normal response:

However, if we generate more than 1 request in one second, we shall see the  blockHandler  function kick in:

And after 1 second, we can see the normal response again.

Again, in a real production environment,  users can use the dashboard to configure and monitor the traffic. 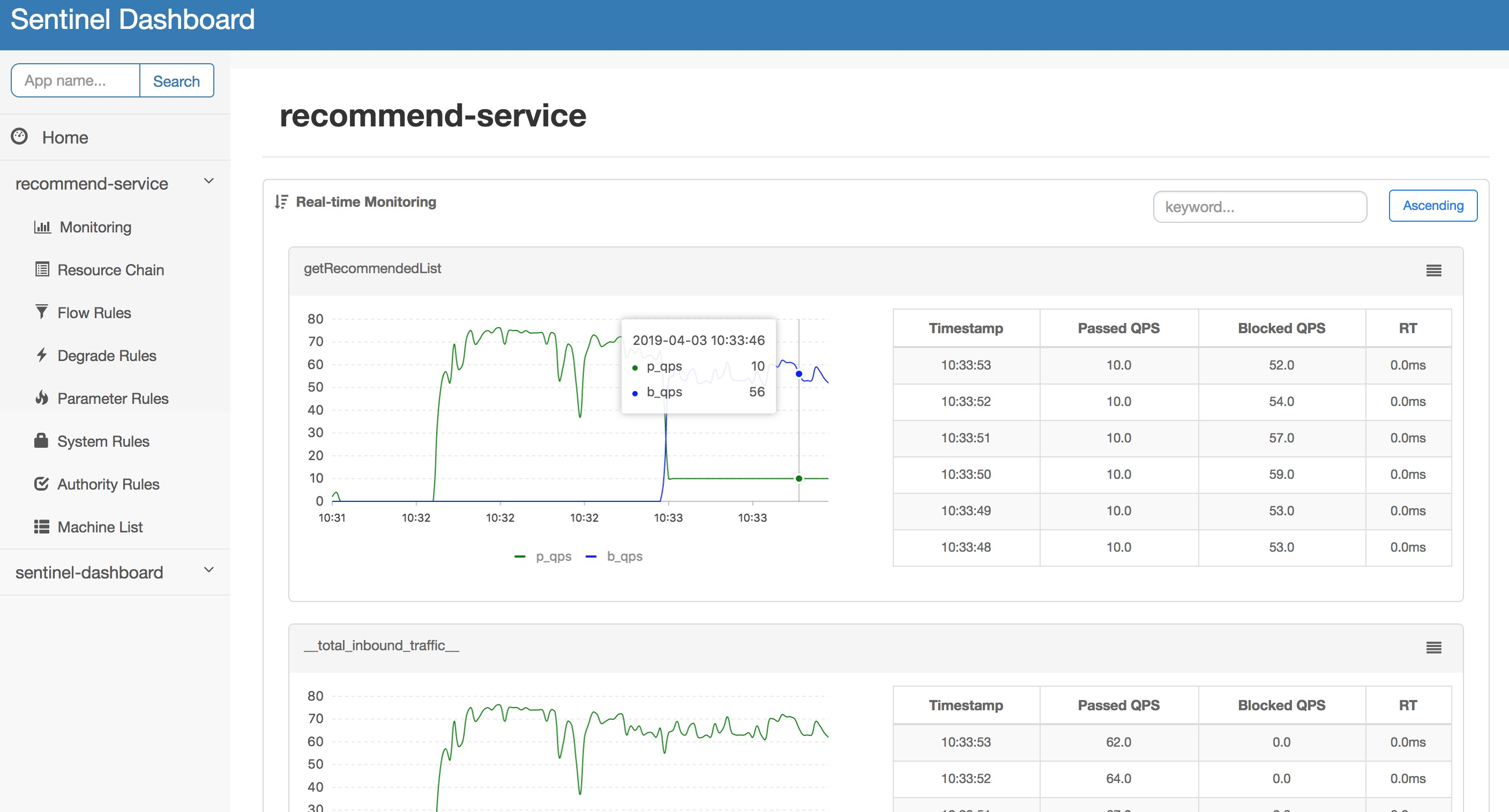 Sentinel aims to provide users with multiple options to control the flow into their services. By doing so, it requires users to define the rules via GUI or code. Other than QPS, users can control the number of threads, or even create a white list for access control. With the growing complexity of distributed services, this model will better serve the user’s requirements.