finally i was approved for sun’s warehouse and the fun of uploading can begin! sun made a nice job for the java store. it looks good although not ready (the gray bar at the right side is what?). see for yourself: 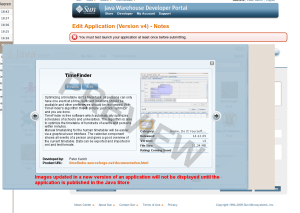 but the procedure to submit my timefinder application was very awful!

i do not understand why the developer should use the ugly webpages and the user can use the nice java store client? why not merge front- and back-end to an ultimate "javastore"?

in the end: please make it a bit easier! at least for me

i know this is from developer for developer, but how should a normal “script kiddy” post its (javafx) apps there? e.g. why do you need to force that security stuff? if it is not signed you could simply warn the user. or why not?