Effective immediately, I want to announce that I am offended by the use of // (double-slash).

This two-character sequence is often utilized in various programming languages to indicate that a comment is being added to a section of code.  While I could provide a reason why the double-slash symbol offends me, society has gotten to the point where such a rationalization is no longer required.

Going forward, I propose we utilize the following pattern to keep from offending me ... and the expected scores of followers who will come to share my views in the near term:

/* This is my comment in a less offensive manner */

In taking this approach, there is a clear mechanism in place to know that a comment is being entered without utilization of that dreadful double-slash approach.  For now, the slash-asterisk approach does not offend me.

Thank you for your awareness of my personal expectations.

Things Have Gotten Out of Control

Of course, my wish is simply an attempt at sarcasm to provide a metaphor of how society has changed over time.

One newsworthy example, and the source of my inspiration, is related to Redis removing the usage of Master/Slave terms in their technology.  Here is a tweet by @antirez related to the situation: 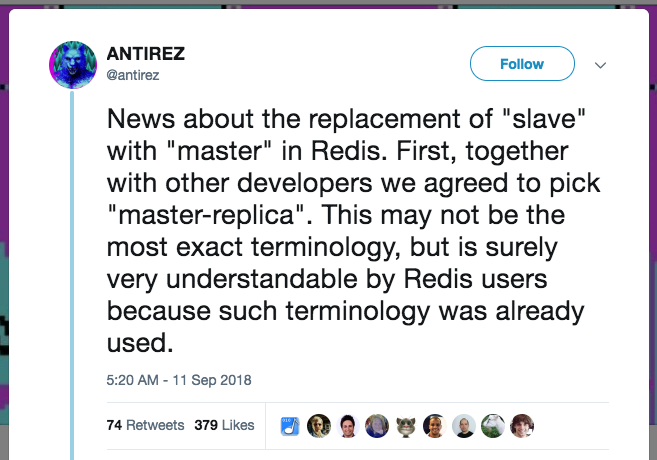 The tweet resulted in quite a few comments.  As one might expect, there were extreme responses from both sides of the situation.  On one side, this change was long overdue, while others cited how that time could have been spent focusing on truly needed improvements.

For decades, redundant technologies often have a primary source of truth and secondary sources that can become available in the event that the primary source encounters an issue.  Somewhere along the line, that primary source was given the name "master" to indicate it was the main instance, source, service, whatever.  Those things which maintained a child-like relationship (or sometimes a copy) of the same technology aspect were referred to as "slaves."

I remember hearing this terminology back in the 1980s with respect to hardware redundancy.  Through the 1990s, early 2000s and 2010s, this terminology has been utilized, given the clear understanding of each component’s responsibility within the solution. In fact, here is a link to an article on Wikipedia.

Looking over a list of available Unix commands, I wonder how long it will be before these commands will need to be removed:

While my reasons may seem comical, the underlying theme is to wonder just how far we are going to travel in order attempt to please everyone.

In the 4th grade, our class had an in-room assignment where we read a story about vegetable soup.  I tried to locate the story, but cannot seem to find the actual story.

The mother of a very large family was making vegetable soup for dinner.  As she prepared to make the soup, each child came to visit her to ask what was for dinner.  One by one they suggested leaving out one of the vegetables, because it wasn't something they favored.  In the end, the family was served a bowl of nothing but hot water.

After she removed something that wasn't favored by each child, they were left with nothing at all.

Is this the direction we are heading in an effort to try to please everyone?

Following these same lines, everyone should avoid Germany for the efforts Hitler attempted in the World War II era.  Those in the United States should also come to understand why the population of Japan would like to sever ties based upon the damage that was inflicted on them during the same time period.  However, this is not the case and both are far closer to our currently history than the master/slave situation that was resolved by Abraham Lincoln in the year 1865 - nearly 153 years ago.

Please don't get me wrong.  I understand that aspects of our vocabulary can be offensive and quite hurtful.  In those cases, the core intent for the usage is to cast down on the individual or group that is being targeted.  I believe there are usages which are not meant to be offensive in nature, but are a way to describe something - like the use of master/slave in technology aspects.  The key is the intent behind the usage.

Since 1980 I have not found a single instance to where any of the technology terms were chosen as a way to be evil towards those groups of our population that at one point in time were involved in a master/slave arrangement.

I wonder if we continue down this path if we will have to come up with meaningless terms (like  kldasrAz  to refer to a primary system and spppkse  to refer to a secondary system) in order to avoid offending someone.  Of course those are merely random key sequences on my keyboard ... which some might find offensive as well.

Or maybe instead, we see them as technology terms and simply continue on with our day.