i like the way that geekycoder, a java developer in singapore, put it in a blog post entitled javafx preview sdk finally released :

"many developers lament why the need for another language and why not improve swing, the gui toolkit library?  well, ria markets are now evolved to appeal to designers and not only to developers through creating a declarative language that much easier to learn and use while still allow flexibility and power through the core programmatic language. for example, flex used mxml based on xml as a foundation to build ui with strong data binding capability and actionscript for programming. similarly, javafx uses javafx script to create ui and java to extend the application further. why switch to javafx when competitors are already have version of products ahead of javafx?  among the major reasons are existing java developers can leverage on myriad existing java open source libraries, existing investment and develop javafx application using state of art and powerful ide like netbeans, eclipse and intellij. beside, another outstanding  component of javafx technology aka javafx mobile, will give a boost in creating rich and powerful mobile application by having almost a full-blown java sdk built into the phone compare to the limited environment of j2me. the greatest advantage is that the same desktop application built with javafx can be used in the javafx-based mobile phone without changing the code base."

the javafx sdk technology preview release has given mainstream developers the opportunity to see the capability and potential of javafx.  as one that has been enamoured with javafx for quite some time, i have been very pleased with the overall reaction from the developer community.

i'd like to congratulate sun for achieving this milestone, and for their tenacity in continuing to move javafx forward.  here is an interview with param singh (senior director of java marketing at sun), and thom theriault (cto of maldenlabs) .  in it, param stated the following:

"each platform has a core strength. our strength comes from the ubiquity of the java runtime, in the mobile area where we are pervasive, and in the six million java developers who can extend their capabilities to provide web resident apps and can do it in a faster time frame."

in that interview, thom had this to say:

"we initially thought flash/flex would be easier to start with, but in the end it was harder to do certain functions.  javafx gives us the advantage of tying into those tried and true java apis that are vital to our app. so while the tools are lacking, they are going to be there."

also, nandini ramani (director of engineering for the javafx platform at sun) did a video interview and demo of the javafx preview sdk with michael coté of redmonk that you'll want to check out.

because i place most stock in developer voices, i opened this post with a quote from a developer, and i'll close it with a javafx code example  that creates sphere with a shadow from silveira neto.  silveira neto is a computer science student and sun campus ambassador at federal university of ceará. 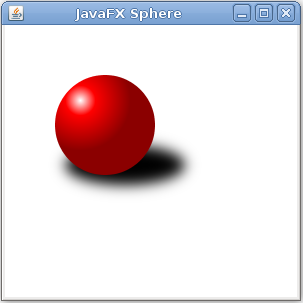 regards, and have fun with the javafx preview sdk !