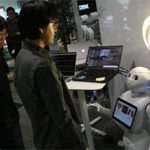 whilst it seems quite intuitive to imagine robots operating in rather impersonal settings such as factories and warehouses, a care home or hospital seems another proposition entirely. yet there are early signs that this may, in fact, be one of the more promising areas for robotics to make a difference.

for instance, devices like the robit have been deployed in home environments to provide a range of domestic support, whilst a number of studies have examined the impact of robots in elderly care environments. the studies found that the robots become welcome members of the community and provide a range of services, from medicine reminders to general companionship.

it should come as no surprise, therefore, that researchers have also found robots to be effective in a wider range of nursing environments. whilst the team are confident in the skills of their robot, they don’t envisage a time where humans will play no part in healthcare. instead, they believe robots will augment and complement the skills of human healthcare professionals.

it remains in the elderly care market that perhaps the best progress is being made, however, with one such foray being made by ibm via their multi-purpose eldercare robot assistant (mera), which was developed in partnership with rice university.

the device, which comes with watson-enabled intelligence inside it, is designed to help both the elderly patient and their caregiver. the first foray of the robot into the marketplace will come via sole cooperativa, an italian healthcare provider, with mera located in senior housing to monitor the day-to-day activities of the residents.

with the population of the western world aging rapidly, it’s a challenge that is growing in importance, and it’s perhaps no surprise that ibm research has opened a lab specifically to look at aging via its thinklab in austin. the lab hopes to use data from mera to better understand how the care of elderly patients can be improved.

“now is the time to invest in, care for, protect, and empower our aging population so they can live more independent lives,” the team say. “our new research on ’embodied cognition,’ which can combine real-time data generated by sensors with cognitive computing, will explore how to provide clinicians and caregivers with insights that could help them make better care decisions for their patients.”

meta was developed in order to provide novel ways to measure the vital signs of patients, whether it’s heart rate, accelerometer data or more qualitative survey-based information from the patient themselves. it uses a softbank pepper robot interface and runs on the ibm cloud, with watson and video technology from cameravitals providing the intelligence for the robot that allow it to record a number of key metrics without requiring any input from the patient or any invasive procedures.

the project provides a fascinating insight into the role robots might play in healthcare in the next few years as society attempts to come to terms with its changing demographics.