databases support the put ting and get ting of data. what distinguishes one database type from another is the structure of the data they store and the means by which that data is retrieved. there are numerous types of databases . however, this short post will only discuss a few.

primitive store : one can imagine the most basic database which contains only simple data values. let’s call such a database a “primitive store.” with a primitive store, there is no structure to the data. each datum is a primitive value in a single unordered set (i.e. a bag of primitives). primitives can be inserted into the set and later retrieved.

key/value store : for key/value-based storage systems the data structure is an ordered 2-tuple that contains a key and a value. other names for this data structure include an associative array, a map, or a dictionary. when interacting with a key/value store, data pairs are inserted into the database and values are retrieved based on their keys.

document store : the next level of structural complexity is the document store . documents are tree/nested structures such as those provided by xml and json . this added level of complexity provides more modeling flexibility to the developer. for example, one can model a person as a document as follows:

to find a person that is skilled in r , a “query object” is constructed. in a manner similar to classic tuple systems , the query object provides required bindings. for all fields not specified, a wildcard is assumed.

finally, most key/value and document stores support the mapreduce pattern. with mapreduce, each document (or key/value) is processed in parallel and the result of each process is aggregated and returned to the user. for example, a map() and reduce() function can be written to determine the distribution the languages of the people in the database. 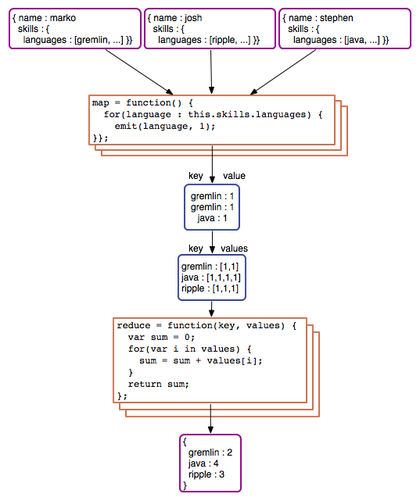 there are two ways to retrieve data from a graph database: pattern matching and traversing . a pattern match query is similar, in many ways, to document querying in a document store. a graph pattern is defined where particular components are variables (i.e. wildcards). the classic language for graph-based pattern matching is sparql .

in the query above, the variables ?x and ?y bind to people and skills, respectively. however, the graph pattern rule says that binding only occurs for those people who know marko and share a skill with him.

to determine all non-looping friendship paths between marko and josh the following can be evaluated ( traversal history ):

finally, to determine the centrality of every vertex in the graph, a traversal of the following form can be used, where m is a map that stores the resulting centrality score for each vertex ( traversal side-effect ).

there are numerous types of databases. each provides a means of storing and retrieving structured data. depending on the complexity of the domain being modeled and the types of computations required, there exists a database out there to meet the needs of every project.