Modular design has a lot of benefits, including:

But, it is much much much harder than people think.  For a start, the abstractions have to be at the right level.  Too high and they can become meaningless and too low and they cease to be abstractions, as they will end up having way too many dependencies ( efferent and afferent).

In a recent greenfield project, which was in the area of digital commerce, I was intent on achieving good modular design in the back end for the reasons outlined above and because the project had potential to grow into a platform ( more than likely microservices) that would be used by multiple teams. To achieve the modular design, after some white boarding the back end was split up into a bunch of conceptual components to achieve shopping functionality.  The core components are:

Now, every software project uses the word " component" differently. In this project, a component was strictly defined as something that did something useful and contained:

The outside world could access a component via a bunch of ReSTful endpoints.

Any component could be individually packaged, deployed etc.  Now, the astute out there will  be thinking,  " this sounds like microservices", well they almost were.  For this project,  some of them were co-located but they were architected so that deploying them out into  individual  deployed artifacts (and hence a microservices approach would be easy).

Ok, to reiterate, the goal was to achieve a very clean modular design.  This meant, that I didn't want  any dependencies from one component's database scheme to another and for this blog post we are only going to focus on how that aspect of the modularity was achieved.

Now, looking at the above components, it doesn't take long to see that isn't going to be so easy.  For example: 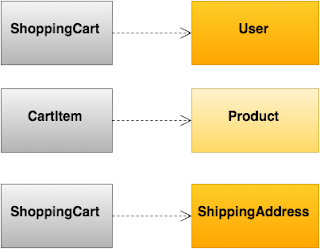 So the challenge of achieving modularity in the persistence tier should now be becoming more clear. References of some sort across components need to be persisted.  Immediately, any developer will ask,  " Wait a sec, if we just use foreign keys for these inter-schema references we get ACID and referential integrity for free!"  True. But then you are losing modularity and introducing coupling.  Say you want to move your products (in the Merchant Component) away from a relational database and use something like Elastic or Mongo DB instead - to leverage their searching capabilities.  That foreign key isn't so useful now is it?

Ok, so first of all in looking for a solution here, I thought about all the references that were across  components to see if there was anything in common with them.  One thing that was obvious was that  they were generally all  immutable in nature.  For example:

So I was now starting to think about preferences:

So, next up was to have a name for this type of relationship - which I was calling "Immutable pointer" in design and architecture documents. But, for actual code I needed something more succinct. The database schema was already using "id" for primary keys and "{name_other_relationship}_id" for foreign keys. So I decided all cross component relationships were named as the name of the entity being pointed to and "ref".

So, some concrete examples:

This meant anytime anyone saw something like "xyzRef" in code, schema or logfiles they knew it was a cross-component reference. In case it wasn't obvious, Ref was an abbreviation for Reference.

Next up was to decide on the format for the actual Refs.  I took a bit of inspirational from that thing call the internet, which of course has similar concepts where abstractions:  websites of web pages contain immutable pointers to other abstractions: hyperlinks to web pages in other websites.

So similar to hyperlinks and URLs, the refs would follow a hierarchical namespacing format. Some good team input from senior technical member suggested to continue the inspiration from the Web and start the hierarchical names with cp://.  CP for Commerce Platform the name of the project. This was analogous to http://  I thought this was good idea, as it indicates that our platform generated the reference.  Again, this meant they stood out in logfiles etc and could be differentiated from any downstream components also using hierarchical type references but in a different context.

The key point of the ref was that when generated it should of course be unique.  To achieve this  a mixture of database primary keys or something unique about the data (e.g. product SKUs were used).

Every shopping cart doesn't just have a User, it also has a selected shipping address where the contents purchased will be shipped to. In the domain model, the user's address lived in the User component.  But unlike the other cross-component references the shipping address could change. Consider your Amazon shopping cart.  Imagine you are on the checkout screen with your selected card and your selected address, but before you proceed to checkout you go into your user preferences and delete your card and address.  This project had to facilitate similar scenarios.  So the User deletes the address that a shopping card id pointing to what should happen?

So for inspiration for a solution here, we can look to the various NoSQL patterns and in particular one of the most popular is eventual consistency. What this says is that unlike ACID you don't  always need consistency straight away, all the time.  In certain cases, it is okay to allow inconsistency on the basis that the system is able to reconcile itself.

So in this case:

So with the architect hat on it is really important we get this all right. Otherwise, the goal  of modular design falls apart.

In this case, it is worth reiterating the strategy one more time:

Software Architecture is about trade-offs, and finding the right balance.  In this case, it was the balance between clean modular design but not going overboard with it so that it become impossible to achieve.

For anyone trying to do microservices, I would strongly recommend trying to master how you would do modular design in your architecture first.  If you can't do this, when you add in the complexity of the network things get very complicated.