As mentioned in the previous post Your AWS Account Is a Mess? Learn How to Fix it!, most AWS accounts are a mess. This can be a serious risk, especially for security-related resources like Security Groups. In this post, we will describe a technique to make the existing Security Group rules as strict as possible using data from VPC Flow Logs and AWS Config. We will focus on inbound rules but the concept works similarly for outbound rules.

Security Group rules often allow more than they should due to various reasons like inexperience, ignorance or simply obsolete/forgotten rules. Our main idea is to compare the possible traffic (e.g. the traffic which can occur according to the defined rules) with the real traffic occurred in an account. The following figure demonstrates this idea. 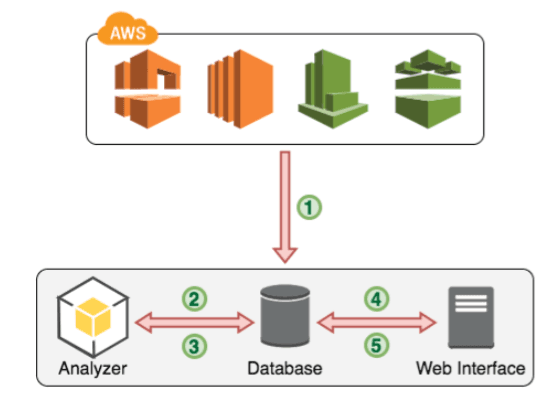 At first, all needed data from AWS APIs (VPC, EC2, CloudWatch, Config) is fetched and imported in a database (1). To every flow in the database, we try to assign the corresponding security groups(s). An analyzation tool then analyzes this data (2). By comparing the flows belonging to a security group with the rules from this group, we can check if a rule is too weak or not needed at all. The algorithm performing this task is shown in figure 4.2. With this information, we can generate rule sets following the principle of least privilege, which are written to the database (3). These rules should then be presented in a web interface (4) for review and applying (5). If a suggested rule is applied, these changes should be accomplished in the AWS account.

To get information about the traffic in an account we use VPC Flow Logs. Flow Logs are some kind of log files about every IP packet which enters or leaves a network interface within a VPC with activated Flow Logs. As Flow Logs are disabled per default, we first need to enable it. Now we have to wait a few days or weeks until an appropriate amount of logs has ben generated to work with. With more logs over a greater timespan, our analysis gets more and more accurate.

In highly dynamic environments instead, it is possible that we find interface-ids belonging to instances already terminated. This means we have no data about which Security Groups were assigned to this instance and so we can not enrich this particular Flow Log Record with this information. Here the AWS Config service comes in. After a brief set up, this service periodically takes snapshots of your whole infrastructure configuration and saves them to an S3 bucket. These JSON files now contain all the information we need, even for terminated instances.

With all needed data in our database, we can start analyzing. For every rule in every Security Group, we make a query against our database. Here are some examples.

If this query returns 0 results/rows, we know that there was no traffic belonging to this rule. A review by a human should be considered to evaluate if this rule is really needed or should be removed.

Now suppose we get some results. To check if this rule should really be a wildcard rule, we analyze the from field in the results. If there are more sources than a configured threshold, the wildcard is considered as acceptable. But if there are just a few sources, our system tries to suggest something stricter than a wildcard source, maybe networks or even single addresses.

We tested this concept/system on three different real-world datasets and got convincing results in each of them. After a review of the suggested rules through the operators of the respective AWS account, many of them were applied to the production environments.