this is another stream of conciseness post, with me trying to figure out what is the best way to resolve a given problem.

update: i ended up solving this in a drastically different way. i'll post about this later on. i am keeping this here because it is a good post about how i think about a problem.

and the reduce phase:

there are a few things that are interesting here.  first, we have both map and reduce run during the map phase, why is that?

well, to do an immediate reduction of the values, of course. this has two major benefits.

you might notice an issue with the code above, though. it seems like we are only running reduce once, and only once.

indeed, this is how ravendb 1.0 behaves. it only run the reduce once, regardless of how many entries you have per key.

wait! i probably need to explain things. let us talk for a second about the following map/reduce index:

now, if we have an order with two line items for the same product, they would be immediately reduced (on the same document) and saved as the map results.

now, the reduce key in this case is the line item product. so when we execute the reduce, we load all the map results that share the same reduce key and run them through the reduce function together.

as i said, this is how ravendb 1.0 behaves. and it works really nicely, except that it behave less nicely if you have a lot of results for the same reduce key. what happen if we had a really popular product, that was purchased by a million different order?

we recently got a problem when one of our customers run into an issue with running map/reduce indexes over the entire us census data. one of the problematic indexes was something like:

as you can imagine, this sort of thing is going to have a lot of items for the same key.

for example, for california, we would need to run reduce over about 38 million items, and for texas it would be over 25 million items. this is really not what we had in mind, so we turned to a long standing bug in ravendb and started to implement multi step reduce.

the question is how to do this, and how to make sure that we don’t affect the overall system performance. as i mentioned before, it is very easy to modify things to fit one particular scenario, while forgetting all about the other scenarios.

things get interesting after that, and here is where you might get lost, because this part is mostly written from the point of view of the implementers.

the actual behavior of the system in the map phase is more complex, because we need to invalidate old items, it looks more like this:

note that we now have the notion of a bucket, and by default that bucket is set to –1. but note that we keep the same bucketid if it already has one, this will be important later on.

the interesting thing happens in the reduce phase:

here is where the important things happen. if we have less than 1,024 items for the same key, we just proceed normally, there is nothing to see there.

if we have more than that, then we create a bucket for all of those results and schedule a re-reduce for the next level up.

in other words, it looks like this, here it the map phase, notice that we start out with all of the bucket ids being –1. when running the reduce phase with level = 0, we get three buckets, like this: 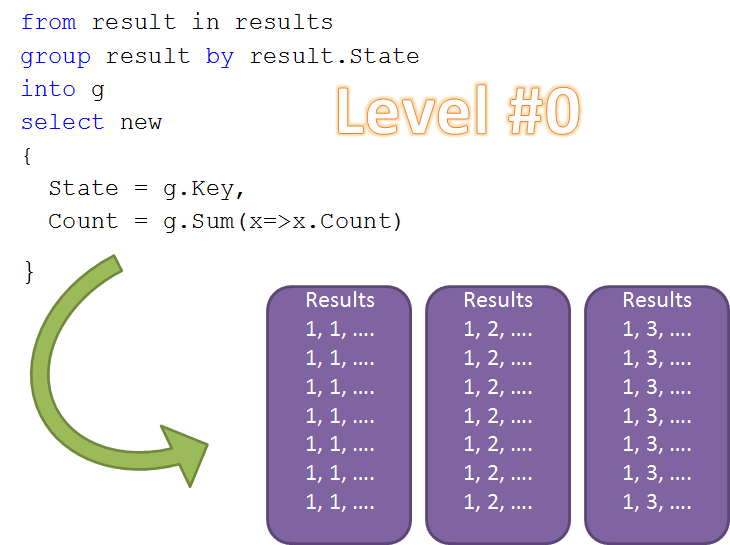 which we now need to re-reduce again, this is where we are called with level = 1. let us assume that the results of bucket 1 & 2 are over 1,024 still, so we will have: 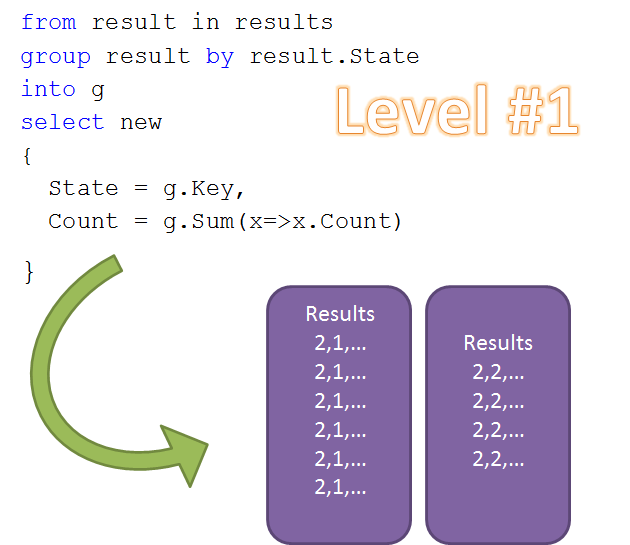 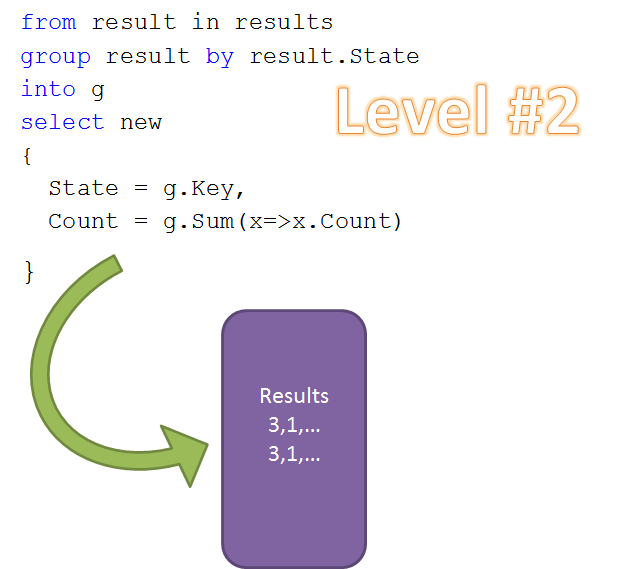 so far, this looks nice, but there are several practical problems that we still need to solve.

to start with, when does this end? we have users who write map/reduce queries like this:

this is a frowned upon (but working) way of allow you to query and sort by the customer name while searching for indexes. the problem with this method is that if we have 15,000 orders per customer, we are going to have the same number come out of the reduce phase as well.

now, the reason this is frowned upon? because while this is using map/reduce, it isn’t actually… you know.. reducing the data. in order to resolve this issue, we are going to make sure that all of the items generated from a single reduce step will always go into the same bucket. this will mean that we keep pretty much the same behavior as we have now, it is going to be inefficient, but that was always going to be the case.

we are also going to limit the number of levels to three, which still gives us the ability to handle over a billion results before a reduce phase would need to see more than 1,024 items at once.

okay, enough talking, let us see if i straighten things out enough for me to actually be able to implement this.