[note: special credit for this post goes to my colleague yuliy gerchikov, who first discovered this issue]

as most c++ programmers know, an object that has been constructed via the new expression must be destroyed by calling delete. the delete-expression invokes the object’s destructor which in turn is responsible for clean up tasks. for instance, here’s some sample code that shows object creation, and then freeing it up via delete:

the c++ specification for delete has this to say:

the delete-expression operator destroys a most derived object (1.8) or array created by a new-expression.

the first alternative is for non-array objects, and the second is for arrays. the operand shall have a pointer type, or a class type having a single conversion function (12.3.2) to a pointer type. the result has type void. (emphasis mine)

so, given that the delete expression has the return type void, what do you think the c++ compiler should do when it sees the following code:

but delete returns void, so it is reasonable to assume that the c++ compilers would throw a fit on the above code, right? right? unfortunately, that’s not always the case.

let’s look at some c++ code. i have two user defined types foo and bar. the difference between the two types is that i declare and define an explicit destructor for foo.

and here’s the screen shot: 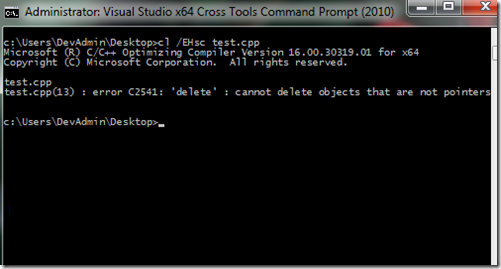 what is going on? why doesn’t the compiler complain at both lines 10 and 13? it turns out, if a user-defined type has an explicit destructor, then the visual studio compiler happily compiles the double delete expression. it appears that in such a case the compiler violates the c++ specifications as the “delete ptr-to-type” returns a non-void pointer instead of void.

suppose i get my code to compile by getting rid of the offending bar object (code shown below). when i run my program, it is guaranteed to crash as we are calling delete on a ptr to unallocated space!

and here’s the screen shot of the crash. notice that as expected, the “ hello world ” line never gets executed. 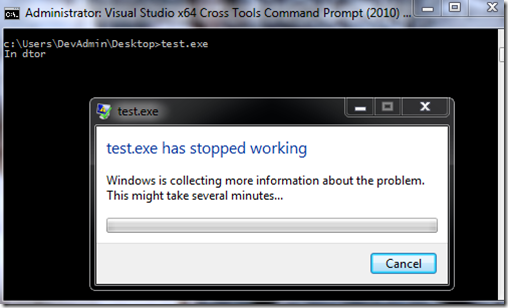 i am not sure if this behavior of the visual studio compiler is intentional. what do you think? have you encountered any weird c++ compiler behaviors? please share your thoughts in the comments below.

Published at DZone with permission of Umair Saeed. See the original article here.