I recently added a Starz subscription to my Amazon Prime and found a new supply of science fiction movies. One of these, Deja Vu, is a time travel story from a decade ago; a weird mashup of the post-9/11 terror attack genre mixed with science fiction. In the film, a terror attack takes place in New Orleans, and a small army of government men-in-black from various state and Federal agencies respond. Because the attack involved a ferry, the NTSB and FBI collaborate along with elements of the ATF, including a talented investigator played by Denzel Washington.

While the FBI/NTSB task force sets about the painstaking work of accident reconstruction and crime scene forensics, Denzel’s character is recruited by a sort of super-secret element of DHS using an experimental technology called “spacefolding” to directly observe the past. The “spacefolding” machine displays a single point in space exactly 48 hours in the (relative) past. The DHS time scientists recruit Denzel’s character because they realize they need an investigator to know where to look, in order to be looking in the right place during the prelude to the attack, and solve the case by witnessing the perpetrators in action.

OK, you’re saying, I’m due back on Earth now. All of this is fun science fiction and vaguely entertaining, but what does it have to do with anything, let alone security velocity?

Well, back, in the real world, we cannot fold space and observe the past — but what if we could?

We have experienced similar challenges in the realms of security threat hunting, intrusion detection, and incident response for decades. When investigating IDS and other alerts, security teams often try to partially reconstruct into the past and divine what happened. This examination of a running system is called live response and involves the sifting of logs and artifacts for clues not altogether unlike an accident reconstruction or crime scene forensic technician, albeit less formal in methodology.

Consider the differential time and effort cost of the two approaches in the film:

Security analysts examine current state including things like open ports and sockets, attached processes, file handles, and active user sessions. If the current state is unrevealing, because the activity under investigation took place in the past, analysts gather logs and file systems and start creating timelines — another method of attempting to reconstruct the past.

What if we could actually see the past instead of painstakingly reconstructing it? This would give us a massive shortcut to answering questions during live response and routine investigation. My recent work with Threat Stack is as close to spacefolding as I can imagine getting — using the TTY Timeline, one can actually go back to events that occurred in the past, observe what happened, and get answers in minutes. For a typical security team, this can reduce live response time from hours to minutes (100–200x). Consider the difference between conventional live response and observing past security events by “spacefolding:" 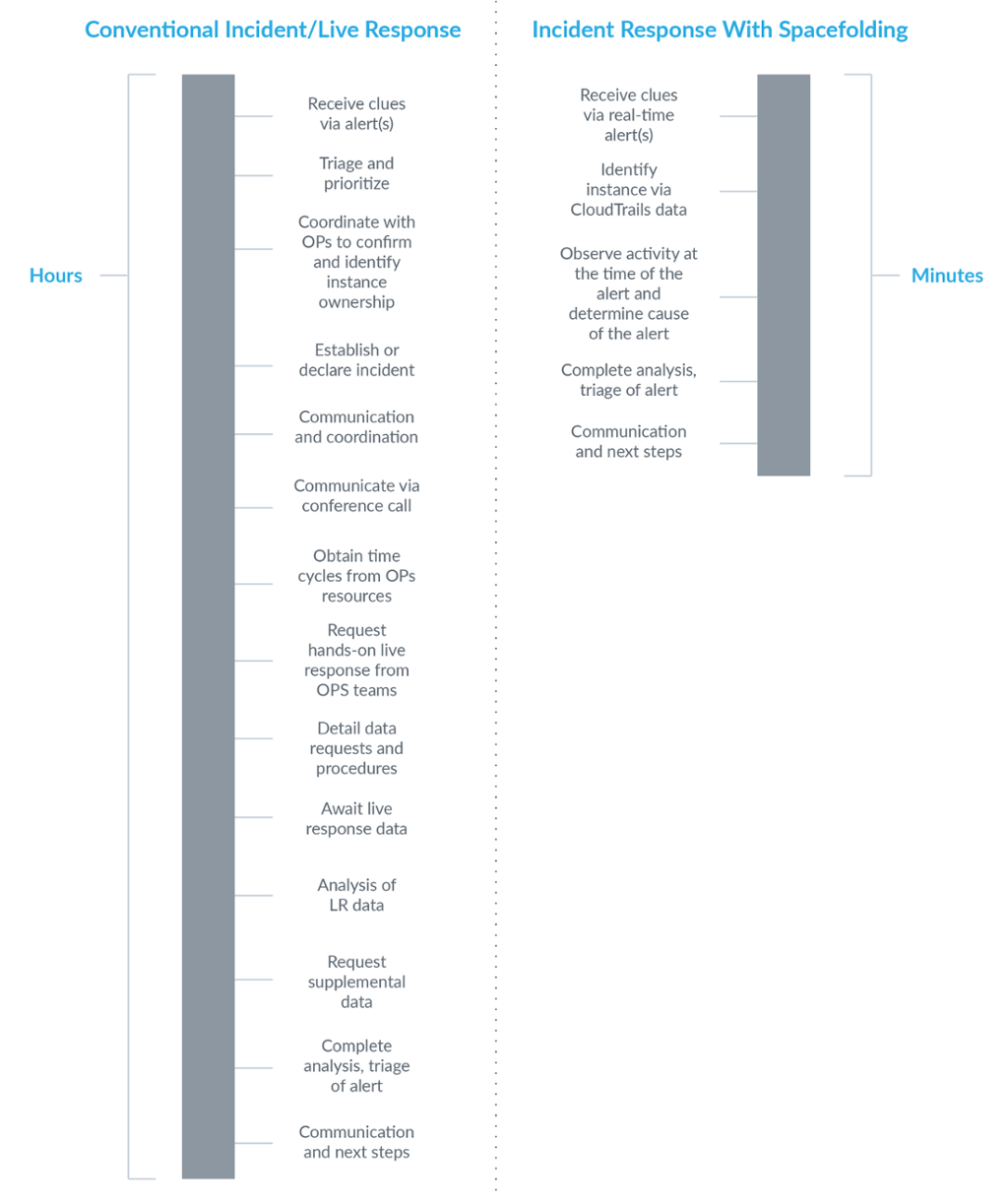 So how could we observe the past? Much of what we know about physics suggests we are stuck in a linear time existence. There may be additional dimensions, including some with possibilities of nonlinear time, but that doesn’t help us here. What we can do is to record state in great detail and play it back using a reference monitor connected to an enormous logging and analytics engine. Imagine using something like auditd to record all system calls or syscalls — command and process activity, file activity, network connections with attached processes, user logins and privilege elevations, and TTY command history. If we record this level of detail into a database that allows us to query and sift the data, we can observe detailed state and past events on a server instance in the past.

In my next post, I will dig deeper into an actual use case of “spacefolding” with Threat Stack and how it can dramatically increase security velocity.