according to the panelists who discussed the topic of “ innovation through global acquisitions ” at 4yfn— the mobile event tailored for entrepreneurs at mobile world congress —there is approximately $1.65 trillion (yes, trillion!) in the hands of international funders and investors looking for the next big thing.

that’s definitely a number worth tapping if you were one of the 170 startups at the event this week in barcelona, spain, a city that has become known for its tech innovation centers of startups, accelerators, and universities. 4yfn, which stands for “four years from now,” was flush with expectant mobile startups who were eager to learn how investors are globalizing and looking for innovative products and services like theirs. 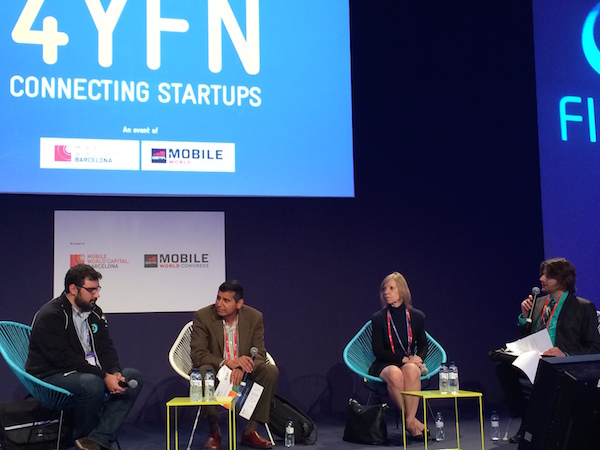 diego mariño , co-founder of ducksboard, which new relic bought last october , and now principal product manager at new relic, represented the entrepreneur’s point of view alongside representatives from hummer winblad venture partners , and cisco , which frequently buys startups for their technology to enter new markets. diego is a spanish native and serial entrepreneur who has founded a couple of tech companies during his career.

ann winblad of hummer winblad cited new relic as a great example of a young company that had the financial resources to purchase a startup to further its tech vision. companies with profiles similar to new relic, she said, are small enough to get a group of executives together to discuss their strategy and quickly determine if a potential acquisition’s technology is a good fit.

culture can be a major point when considering what company is right for you. ram jagadeesan of cisco advised startups to consider cultural issues before agreeing to an acquisition. make sure you understand how the acquiring company plans to integrate the technology and check to see if they have a good track record for executing.

culture fit was not an issue for the ducksboard team because they had already spent a lot of time with new relic. diego told attendees that his team had already made several visits to new relic’s san francisco headquarters to discuss integration with his groups next-generation dashboards, and the vision was identical on both sides: help customers become more data driven in their decision making.

ann noted that the market landscape is “a different world” compared to the early 2000s, which was the beginning of business on the internet. at that time, she said, her firm was more focused on investing in large, web-scale platforms like mulesoft (or new relic, although her firm was not an investor).

finally, she noted that she saw more globalization among acquiring companies, including european companies initiating acquisitions of u.s. companies, not just u.s. firms buying european organizations. with globalization at work in both directions, entrepreneurs can look forward to more opportunities than ever before.