Over the past few articles, I've been showing the details of the Virtual Router Redundancy Protocol (VRRP). In the first article, I introduced the technologies. In the second, I showed a virtual lab using Vagrant, while in the third, I showed packet captures to reveal the details of how it works.

This time, I want to discuss real-world applications. It's obvious from the name that the original purpose is to provide redundancy for routers. So let's start with that one first.

Imagine a typical local area network (LAN) like you might find in a home or small office setting. Most of the nodes on this network are hosts connected through a switch or wireless access point. A single router provides the connection to the broader Internet. (A lot of times the router serves as switch and wireless access point, but if your network is like mine, that doesn't get you far enough for all devices.) So the setup looks like this:

The key insight is that this is an edge network, with a single path for internetworking. As a result, in this configuration, the router is a single point of failure. For home or small office networks, we live with this and just quickly buy a replacement if there's a failure. But we might have a similar setup for a corporate extranet, where a few servers (including a web server, email server, and virtual private network VPN server) are exposed to the Internet in a "demilitarized zone" (DMZ), connected through a single router with a firewall in order to protect the corporate intranet from attacks from the public Internet.

In this case, downtime is not acceptable, and we need a different solution. This is the case that VRRP was originally designed for. We instead have two or more routers, each with an address on the Internet side. On the "inside," the routers share a virtual IP (VIP), which is the default gateway for all of the nodes on the inside. It looks like this:

We would also want to make the switch and the wireless access point redundant, but this can be accomplished at lower levels of the network stack (i.e. link level or physical). Note that the two routers don't even have to be connected to the same Internet Service Provider (ISP), so we can ensure service even if the failure is outside our control.

One more thing to note is that we're getting redundancy, but not load balancing from this setup. Our hosts are only configured with one default gateway, and only one router has the VIP at a time.

So far, VRRP has gotten us redundant routers, so our network doesn't lose connection to the Internet if we lose a router. But our individual hosts are still single points of failure. If we are in a DMZ, with a web and email server on a corporate extranet, we need those services to be redundant so the loss of a server doesn't take us down.

We can still use VRRP in this scenario. We install a VRRP implementation like keepalived on each server, then configure separate virtual router IDs for each service. The result looks like this: 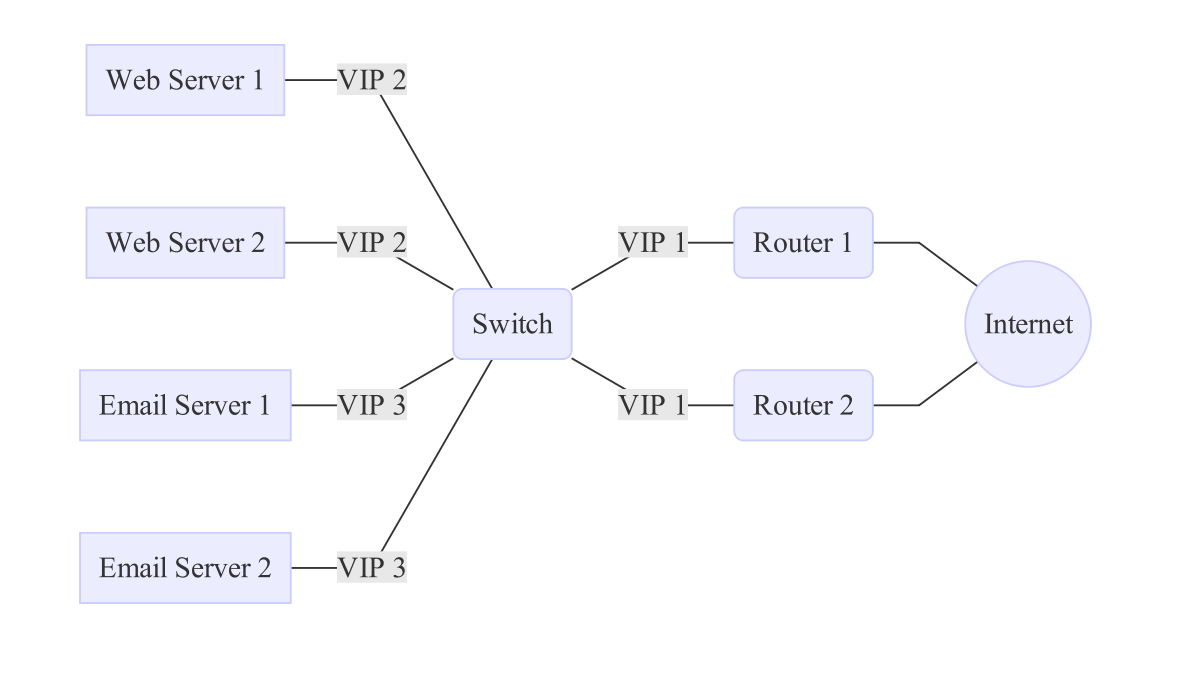 Again, I left off the redundant switch connections to keep the diagram simpler.

Each separate server type has a separate VIP within the DMZ LAN. To really get the benefit of this design, the VIP addresses assigned to the servers should be publicly addressable; that way there can be a single entry in the Domain Name Service (DNS) for the service. If we tried to use private addresses, with our router performing Network Address Translation (NAT) and port forwarding, we would have to work around our redundant routers — either with multiple DNS entries (DNS round robin) or with a VIP on the Internet side of the routers. Neither is straightforward.

This still doesn't get us load balancing, so let's add that next.

To add load balancing, I need another service that will accept connections on its "front end" and then choose a "back end" service to send it to. For Linux, HAProxy is an excellent choice, able to handle everything from basic TCP/IP up to specific applications like HTTP. It can do sophisticated things like session affinity through HTTP cookies. This avoids the need for a single user session store across all the backend services by sending the same user to the same back end during the entire session. So our backend services are less dependent on each other and are easier to create.

HAProxy does the back end load balancing, but it doesn't provide failover on the front end. So we use both HAProxy and Keepalived together. Only one HAProxy will be active at a time, but it doesn't use many resources, so that's OK. If we focus on the web server from our previous example, it looks like this: 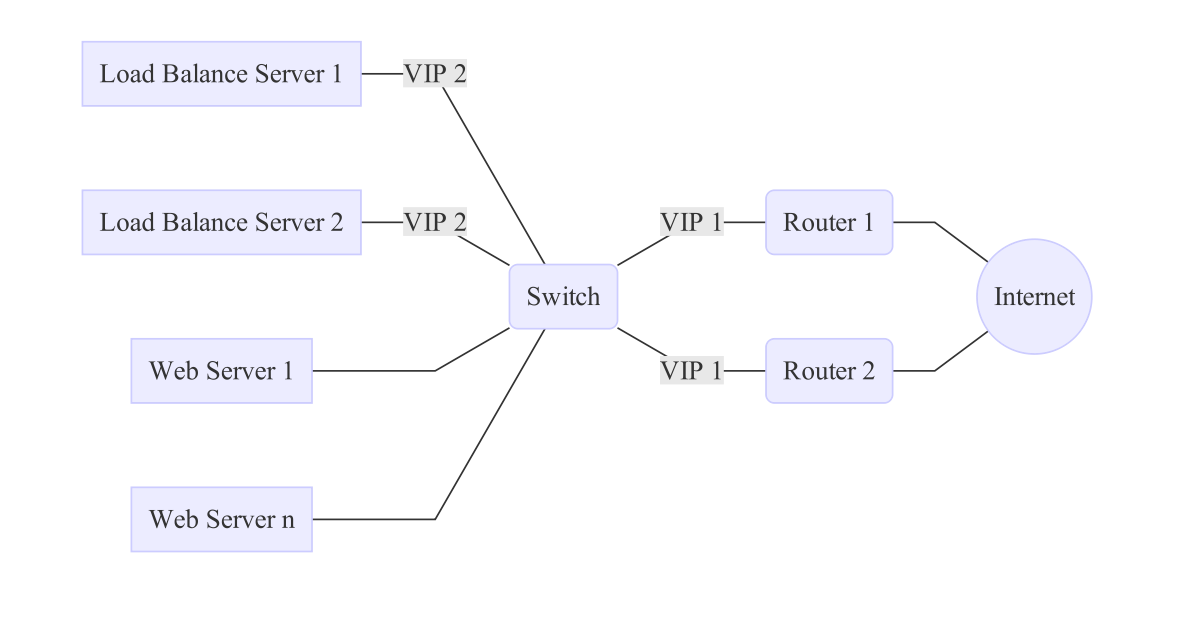 This topology diagram doesn't do justice to the architecture, so let's just take the ethernet switch as understood and show the TCP/IP connection architecture:

I labeled the connections from the load balancers to the web servers as "LB" to show that they are all in use simultaneously rather than just used for failover. Only one pair of "LB" connections is used at a time, based on which load balance server has the VIP.

One more topic is worth adding. Let's say that we have multiple Internet providers and have connected one to each redundant router. We want to use both providers under normal conditions to improve performance. Each router will have a different IP address on its exterior connection, so we need some way to get traffic coming in and going out over both routers.

We start by ensuring we have a public IP address for the services we're providing (like our web server). That way, no matter where the client traffic is coming from, there's one destination for routing.

Next, we need some cooperation from our Internet providers. They are going to need routing table entries for our public IP addresses. Depending on where we get the addresses, at least one of our providers is going to need to add a special route for us. If we get our address from one provider, the other provider needs a special route so they don't send traffic meant for us through the other provider. If we get our address independent of either provider, they both have to add routes.

Once we have that, we have a way for our clients to route traffic through whichever of our routers is "closer" to them. But we need to get the traffic back efficiently as well. To do this, we need to customize our routers. We add routes to each of our routers that reference the other router. So if we know that certain address ranges are best routed through provider A, we add a route to router B so it sends the packet over to router A rather than just sending it to its default gateway. And vice versa for cases where provider B is better.

If one of our routers fails, this route will stop working and the remaining router will just use its default gateway for everything. So we still keep our failover, but we get load balancing too.

At this point, we've gone about as far as we can go with the available technologies. The next step would be to put our services in different physical locations so we can provide quality service no matter where the client is located. Unfortunately, we can no longer have a single IP address for our service, so we need a smarter DNS with something like geolocation routing (for example, a service like Amazon Route 53).