The Virtual Router Redundancy Protocol (VRRP) is a useful approach to provide failover at the network level on a subnet. I thought it might be interesting to see the details at the individual packet and frame level, so I put together a set of virtual machines for the purpose. On the way there were some other interesting challenges, so I'll spend a little time writing about those as well.

To start, I'd like to introduce the technologies to show their purpose. In particular, in addition to VRRP itself, the Address Resolution Protocol (ARP) is critically important on an Ethernet network in order to make VRRP work, so I'll introduce that too.

From the perspective of the client, this is handled seamlessly. The client uses the same protocols it's used to (Domain Name Service, TCP/IP or UDP/IP, ARP). There is a little work that's done automatically when a failover happens, but most of the network stack is unaffected.

For the rest of this discussion to make sense, it helps to have a picture of the OSI model handy. In particular, we're going to be working at Layer 2 (Data Link) and Layer 3 (Network). The whole idea of VRRP is that Layer 3 stays exactly the same (one IP address continues to work) while the traffic is going to a different host at Layer 2 (different Ethernet address).

When using Internet Protocol (IP) for Layer 3, addresses might be IP version 4 (IPv4) or IP version 6 (IPv6). In this case, we'll be working with a "virtual" IP address of192.168.199.10. This address is going to move around between servers, but their MAC addresses will stay the same.

Note that even though these two styles of address look very different, they are both just a series of bytes. The way we write them is just a convention. We could say thatC0:A8:C7:0A is the virtual IP address rather than 192.168.199.10; they mean the same thing. (192 in decimal is C0 in hexadecimal.) It's useful to understand this, because when we look at the actual data that goes across the network, we'll see it in either form.

The other thing worth mentioning is that while IPv4 uses only four bytes for an address, a MAC address is six bytes. This means that there are 2^32 possible IPv4 addresses (about 4 billion) and 2^48 possible MAC addresses (about 281 trillion). This may seem a little odd, since Ethernet networks tend to max out at a couple hundred hosts, while IPv4 is used for the whole Internet. But the reason is that it makes it much easier for hardware manufacturers to build in the MAC address for each device they make; the whole space of MAC addresses is divided up amongst hardware manufacturers, so each manufacturer can use addresses from their own space.

(For what it's worth, my virtual server with its address of 08:00:27:19:5d:24 is using an address from "Cadmus Computer Systems", which seems like a strange thing for an Oracle (formerly Sun Microsystems, formerly innotek) VirtualBox VM. Therein lies a tale.)

To make this discussion of network layers clear, let's talk a little bit about what happens when we send data on an Ethernet network. We are going to look closely at a ping. The ping command uses the Internet Control Message Protocol (ICMP) to send a quick message to another host on the Internet and get a reply. From the perspective of the OSI model, here's how it works:

This last step is important because it's how hosts all over the Internet are able to communicate, even though they aren't directly connected together. But, this topic is way too large to handle here.

To get back to our steps:

Here's an example of this, from a network capture. In a future article, I will go through the capture process in detail. The capture is displayed in Wireshark. 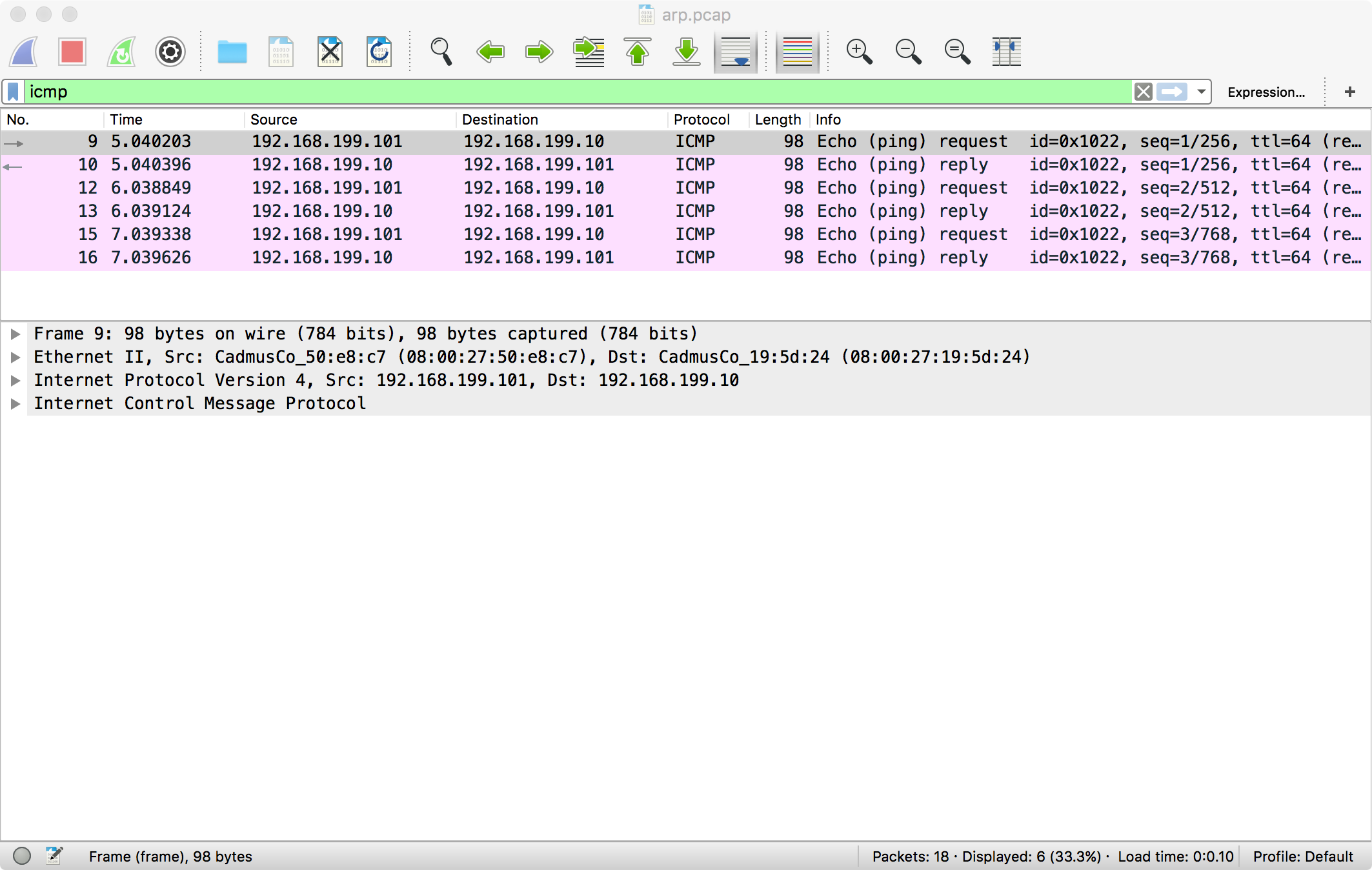 At the bottom, you can see Wireshark's analysis of this particular packet, including the Ethernet frame, the IP packet, and the ICMP (ping) data.

For this article, the big unanswered question is, where does the table come from that relates IP addresses to MAC addresses? There has to be a program to build that table, since we can plug any computer from any manufacturer into a network and it can communicate, no matter what IP address it got.

This table is built using Address Resolution Protocol (ARP). ARP is a pretty simple protocol. It's one of those things that can mostly be ignored as it "just works", but without which a network couldn't function. It also is one of the things that bounces around a network even when computers are "idle", causing network activity lights to light up cheerily.

When a computer first joins a network, its ARP cache is empty. It builds the ARP cache by receiving ARP messages from other computers on the network.

If a computer has been communicating with others for a while, it will have a pretty full ARP cache, and so it will know the MAC address for every IP address out there. But if it needs to send a packet to an IP address, and it doesn't have the corresponding MAC address yet, it sends an ARP request. This is a broadcast Ethernet message (which means its destination is ff:ff:ff:ff:ff:ff). All hosts listen for this request, and if they have that IP address, they reply with an ARP message.

Here's an example from Wireshark showing the ARP request happening prior to the ping: 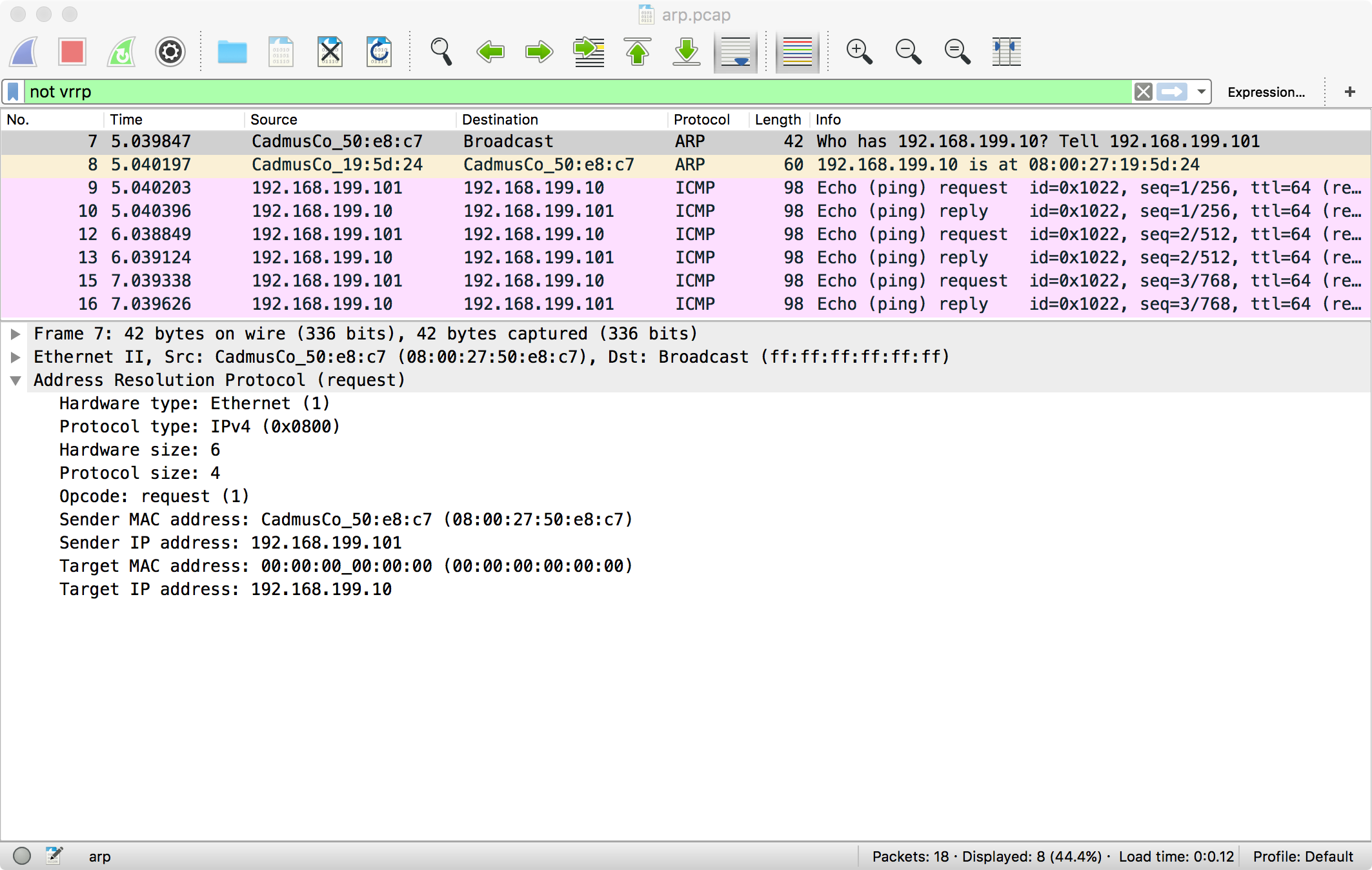 You can see that the source IP address and the source MAC address are both in the ARP request. So the destination host gets an entry in its ARP cache "for free" without having to request it. The theory is that if host "A" is going to send to host "B", host "B" will have to respond and will need that ARP entry. It may seem like every host on the network could also update its ARP cache with the data from the request, since the request is a broadcast, but this would be a waste of resources (since most nodes on the network already have the ARP cache entries they need) and would not be as robust for IP address collisions.

ARP relies on one and only one host on an Ethernet network being configured with a particular IP address. If multiple hosts are configured with the same IP, they will both respond to ARP requests. Generally, the latest one will "win" and will get the traffic for that IP address (which it may not be expecting). Also, depending on when devices join the network, they may have one or the other host in their ARP cache, so some hosts may talk to one and some to the other. This is a source of much confusion and frustration.

Next time, we'll shift gears and I'll walk through a virtual machine configuration that will enable us to do some testing and packet capture from servers using VRRP.