In this post, I want to talk a little about the hardware and platforms that developers are targeting for Virtual Reality (VR) and Augmented Reality (AR) apps and games.

At SlashData, their team runs regular surveys of software developers around the world to uncover valuable insights from those working in mobile, desktop, IoT, cloud, web, game, AR/VR, data science, and machine learning.

The 15th Developer Economics global survey wave ran from May to June 2018 and reached more than 20,500 developers from 167 countries. From the survey, just over one in five developers said they were working with AR/VR or had done so in the last 12 months. Of these developers, almost two-thirds were trying out AR/VR as a hobby.

The survey responses told us that more professional games developers are working with AR/VR hardware than are developing games for consoles. The most popular VR hardware for professional games developers to target is the powerfully dedicated rigs such as those from Facebook’s Oculus and the HTC Vive. These headsets immerse the user entirely in the experience, and at present, in the consumer market, they appeal mostly to early adopters. While they are clearly an attractive proposition for professional game developers, they are less likely to be a target of developers working on games in their spare time, or building casual games for the broader mainstream audience.

More accessible hardware for a VR experience presents itself in the form of Google Cardboard, and its follow-up, Daydream View. This kind of cheap headset appeals to a broader range of users who can try it out using a smartphone they already own. Games developers working with VR are targeting these kinds of products too; in popularity, the Cardboard comes a close second to Oculus Rift.

Microsoft launched their Windows Mixed Reality (formerly Windows Holographic) platform in October 2017. Despite its name, it also allows developers to build a fully immersive VR experience, delivered at launch by headsets from third parties such as Acer, Dell, HP, and Lenovo. However, with the platform, Microsoft has identified a key factor for developer success: usability on the move. VR is fully immersive, but a user must, for their own safety, be made aware of obstacles such as other people and the confines of their surroundings. For users on the go, developers need to find a way to blend computer-generated imagery with the real world, which is less of a fully immersive VR experience and closer to the digital augmentation that is traditionally the realm of augmented reality (AR). This is offered by the Windows Mixed Reality platform, which builds upon Microsoft's AR experience with Hololens, currently the most popular standalone headset for delivering AR, and is the successor to the early attempt by Google with its Glass product.

Apple and Google also see the possibilities and advantages of AR over VR, particularly when it comes to smartphones, which are increasingly capable of delivering a powerful mixed reality experience. There is an ongoing battle for developer mindshare playing out between both companies, who envisage third-party apps and services that use AR as valuable additions to their app stores. Successful apps add billions to the top line (Apple was expected to make $3 billion revenue over 2 years from in-app purchases within the best known AR title to date, Pokémon Go) and high-profile AR apps also strengthen the ecosystems of both companies, boosting other revenue streams. 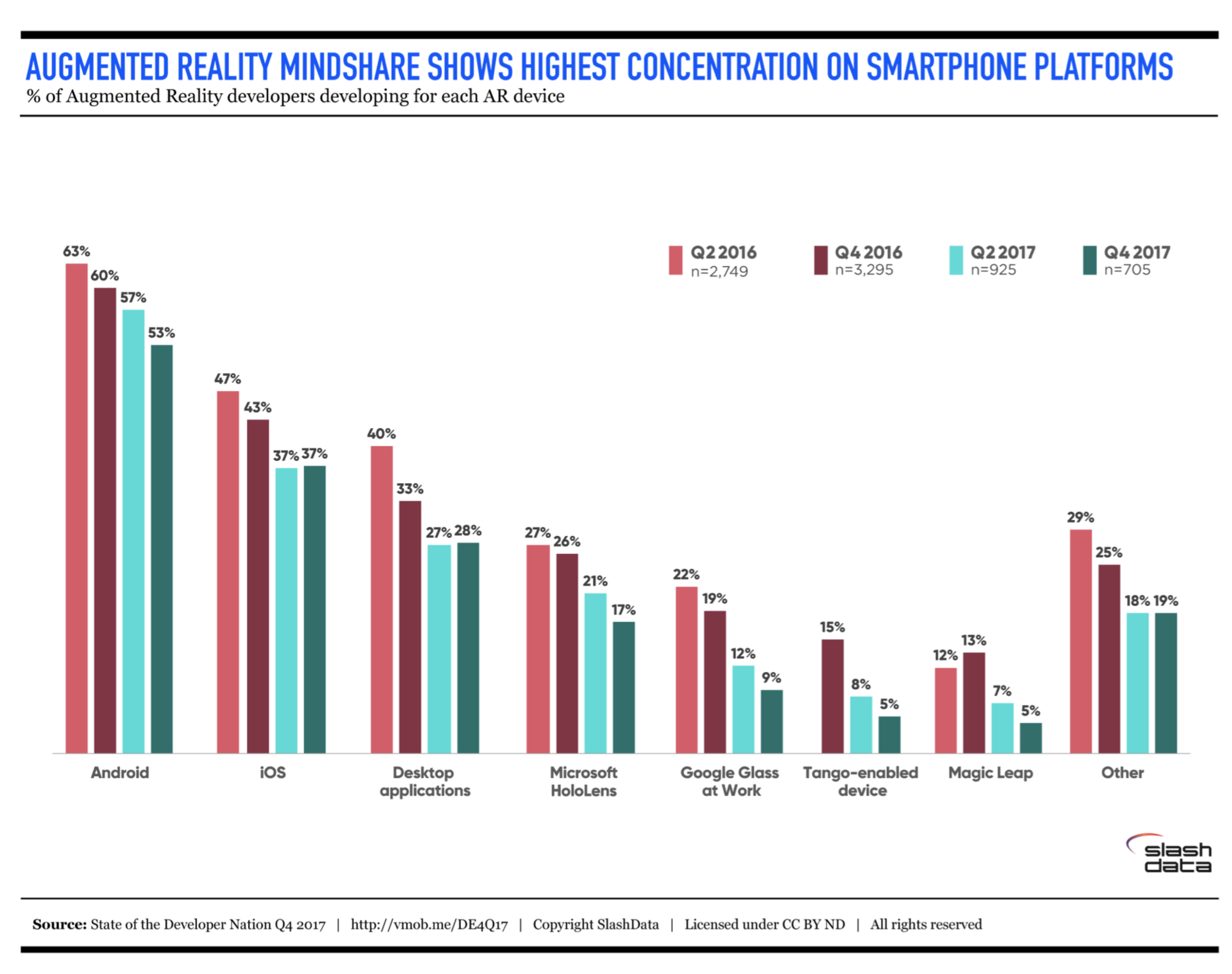 To help third-party developers work with AR, Apple launched ARKit with iOS11 in Q3 2017, providing AR support to all updated iPhones from the 6S onwards and instantly offering developers a sizeable addressable market for AR apps and services. In turn, Google launched ARCore v1.0 at Mobile World Congress in February 2018. It is available in approximately 100 million existing handsets such as Samsung’s Galaxy S8 and Google’s Pixel range of smartphones, with other manufacturers partnering to ensure ARCore support in their smartphone series.

What Do You Think?

We are currently running another survey and we would value your input. If you’re a software developer working in the field of AR or VR, or thinking about doing so, please consider answering the questions. If you’re not a developer but are working in the AR/VR field, pass the link on to your developer friends and colleagues.

Every survey completed has a chance to win Oculus Rift +Touch Virtual Reality System to test your creations (or simply play around), Samsung S9 PLus, $200 towards the software subscription of your choice, or other prizes from the prize pool worth $12,000! Plus, if you refer other developers to take the survey, you may win up to $1,000 in cash. Just don’t forget to sign up before you take the survey so that we know you want to be included in the prize draw!

How Useful Are Google's AR Guidelines?