In the last post, I wrote about unit testing data access in ASP.NET Core. This time I'm going to go into integration tests. This post shows you how to write an end-to-end test using a WebApplicationFactory and hot to write a specific integration test.

I'm sure most of you already know the difference. In a few discussions, I learned that some developers don't have a clear idea about the difference. In the end, it doesn't really matter, because every test is a good test. Both unit tests and integration tests are coded tests, they look similar, and use the same technology. The difference is in the concepts of how and what to test and in the scope of the test:

Let's see how it works.

I'm going to reuse the solution created for the last post to keep this section short.

I only need to create another XUnit test project, to add it to the existing solution and to add a reference to the WebToTest and some NuGet packages:

In the next step, I create a test class for a web integration test. This means I set up a web host for the application-to-test to call the web via a web client. This is kind of a UI test then, not based on UI events, but I'm able to get and analyze the HTML result of the page to test.

Since ASP.NET Core 2.0, we've had the ability to set up a test host to run on the web in the test environment. This is pretty cool. You don't need to set up an actual web server to run a test against the web. This gets done automatically by using the generic WebApplicationFactory. You just need to specify the type of the startup class of the web-to-test:

Also, the XUnit IClassFixture is special here. This generic interface tells XUnint to create an instance of the generic argument per test to run. In this case, I get a new instance of the WebApplicationFactory of Startup per test. Wow, this test class created its own web server every time a test method got executed! This is an isolated test environment per test.

Our first integration tests will ensure the MVC routes are working. This test creates a web host and calls the web via HTTP. It tests parts of the application from the UI to the database. This is an end-to-end test.

Instead of an XUnit Fact, we create a Theory this time. A Theory marks a test method which is able to retrieve input data via an attribute. The InlineDataAttribute defines the data we want to pass in. In this case, the MVC route URLs:

This actually creates three test results as you can see in the output window:

We'll now need to do the same thing for the API routs. Why did I do this in a separate method? Because the first integration test also checks the content type, which is the type of an HTML document. The content type of the API results is application/json:

This also works and we have to more successful tests now:

This isn't completely isolated, because it uses the same database as the production or the test web. At least it is the same file-based SQLite database as in the test environment. Because a test should be as fast as possible, wouldn't it make sense to use an in-memory database instead?

Unfortunately, I didn't get the seeding running for the in-memory database using the current preview version of ASP.NET Core 3.0. This will result in a failing test for the route URL /api/person/1 because the Person with the Id1 isn't available. This is a known issue on GitHub.

To get this running, we need to ensure seeding explicitly every time we create an instance of the dbContext.

This hopefully gets fixed, because it is kind of bad to add this line only for the integration tests. Anyway, it works this way. Maybe you find a way to call EnsureCreated() in the test class.

Sometimes it makes sense to test more specific parts of the application, without starting a web host and without accessing a real database, just to be sure that the individual units are working together. This time I'm testing the PersonController together with the PersonService. I'm going to mock the DbContext, because the database access isn't relevant for the test. I just need to ensure the service provides the data to the controller in the right way and to ensure the controller is able to handle this data.

At first, I create a simple test class that is able to create the necessary test data and the DbContext mock:

Next, I wrote the tests, which look similar to to the PersonControllerTests I wrote in the last blog post. Only the arranged part differs a little bit. This time I don't pass the mocked service in, but an actual one that uses a mocked DbContext:

Let's try it by using the following command: 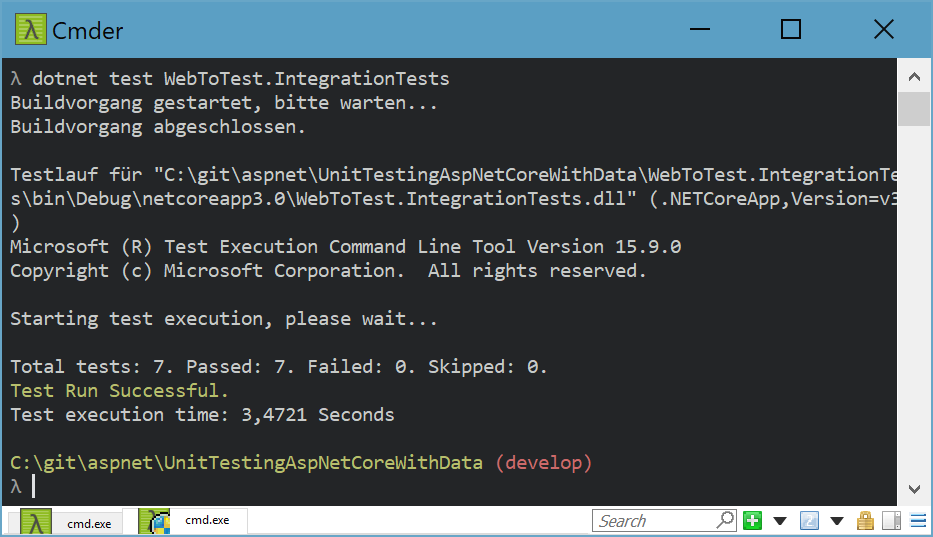 At the end, we should run all the tests of the solution at once to be sure we don't break the existing tests and the existing code. Just type dotnet test and see what happens: 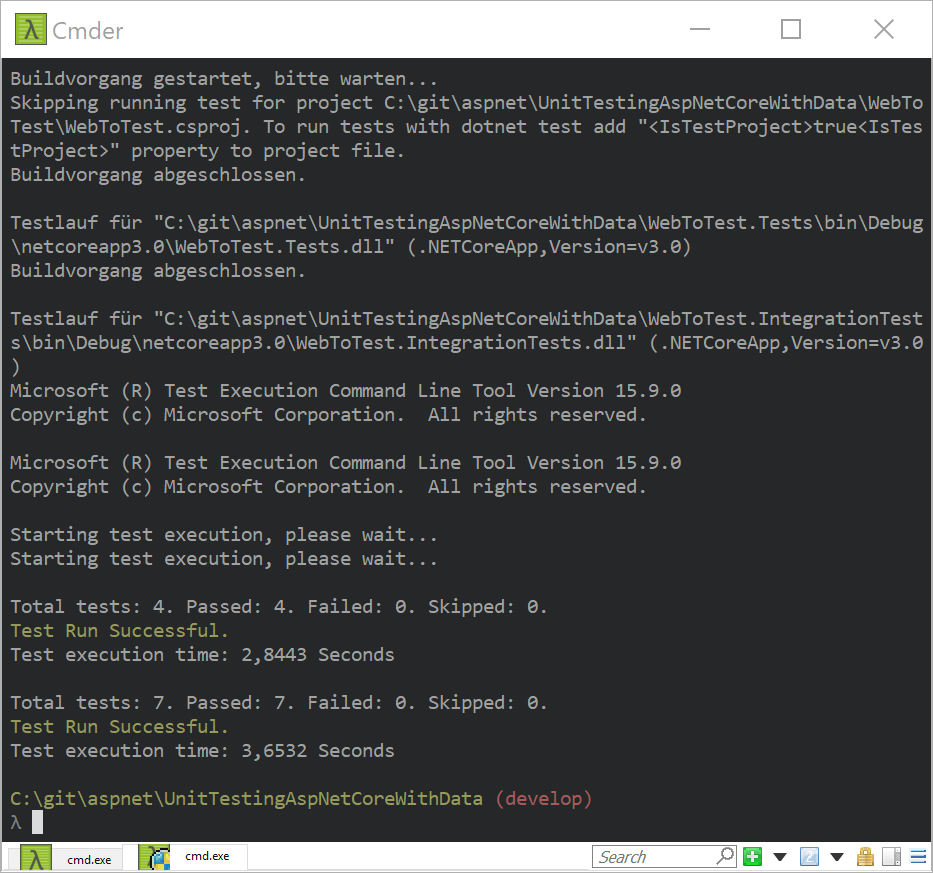 I wrote that integration tests will cost a lot more effort than unit tests. This isn't completely true since we are able to use the WebApplicationFactory. In many other cases, it will be a little more expensive, depending on how you want to test and how many dependencies you have. You need to figure out how you want to isolate an integration test. More isolation sometimes means more effort, less isolation means more dependencies that may break your test.

Anyway, writing integration tests, in my point of view, is more important than writing unit tests, because it tests that the parts of the application are working together. And it is not that hard and doesn't cost that much.

Just do it. If you never wrote tests in the past, try it. It feels great to be on the safe way, to be sure your code is working as expected.