Join For Free
An amazing thing happened last month. I was at DrupalCon in Denver. It’s a Woodstock of open source-oriented developers who reliably asked me, “What’s Microsoft doing here?”

My answer was easy: Microsoft wants open source developers to know that open software like Drupal can leverage Windows and SQL Server – taking advantage of the most manageable and pervasive operating system, and scalable database in the world.

Most developers are caught off guard when they learn about Microsoft’s many contributions to the open source community. Microsoft remains a for-profit company, to be sure, but we aggressively reach out to help the open community. Their work and innovations shape a lot of our industry. Microsoft doesn’t have the answer to every software problem, but we do have a lot of excellent pieces.

But that is not the interesting part

There was a lot of frustration toward Internet Explorer. In reality it was frustration at browser inconsistency, but was clearly directed at IE (especially version 6 – even though we are on version 9). I sympathized and even agreed. Microsoft has made a strong push to rid the world of version 6; even going so far as to include Internet Explorer in Windows Update to help motivate even more users to update to a better version of the browser.

I sympathize. But, I can’t relate. Let’s talk to each other like business people for a moment. If Internet Explorer represents more than 50% of all the internet browsers in the world and some web developer makes the decision not to write to it – the customer is the one getting screwed.

Some web developer might be a JavaScript expert, and have all the HTML5 tags memorized, and implement content management solutions in their sleep – but if they write my application so that less than 50% of the world’s browsers have an excellent experience, then they suck.

Check out Q1 numbers for Internet Explorer. There are two things worth noting. The first is that Internet Explorer represents more than 50% of all the browsers in the world. That’s significant – and warrants some attention from developers. Second, Internet Explorer’s market share is increasing (even if only a little). That means the relevance of Internet Explorer is not going away. Look at this: 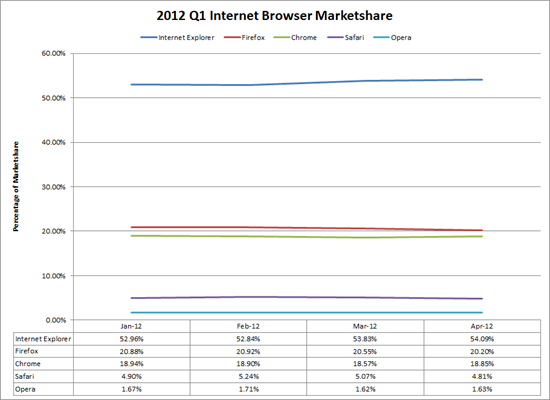 In fact look at IE’s trend over the last 2 years: 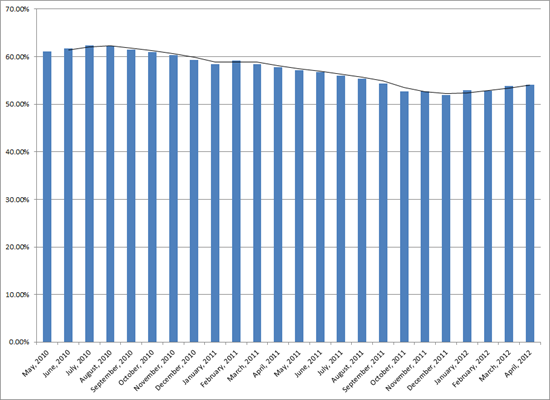 Yes, Internet Explorer market share has drooped, but it has mostly held steady – even in the rage of Firefox and Chrome; even in the wake of version 6. Internet Explorer has remained the majority of all internet browsers for a long, long time. In an earlier post we talked about why this is true.

In case you live in a cave, I wanted to let you know that Windows 8 is on the way. The next version of Windows will usher in the next version of Internet Explorer (IE10). It will support more standards than any previous version. And, will have fewer reasons for average users to consider alternative browsers; not to mention how important Metro IE10 will be to Windows 8’s touch experience.

Since Windows 8 will showcase IE10 out of the box, every strategy to push Windows 8 sales will inadvertently shore up or expand Internet Explorer market share. At least for a while, Chrome, Firefox, Safari – and any other browser – will not have enough differentiation to expand their adoption.

In other words: Internet Explorer is about to surge – again.

This means, at least, one thing for web developers. If you are intentionally not supporting Internet Explorer because you feel its market share is insignificant or waning, you should think again.

The up side to this is that IE9 & IE10’s support for standards should make this support a trivial task. Frustration around IE’s standards support is mostly fueled by version 6, which (gratefully) decreases every day. (IE6 is 11 years old!)

I am not trying to convince you what browser is best. You can make that call. This is simply a lesson in serving your customer, making good business decisions, and looking at the real numbers. It is very important that your web applications support Internet Explorer – unless you have a niche audience. Otherwise, you are foolishly missing out on or underserving most of the internet.

What do you mean Internet Explorer?

All Internet Explorers are not created equally. We know that version 6 was big for a while; and that as awesome as it was when it started, its quirks were quickly annoying. Then there was version 8, now 9, and soon 10. But given the current market, what version matters? Great question.

But, on the whole, the breakdown looks like this: 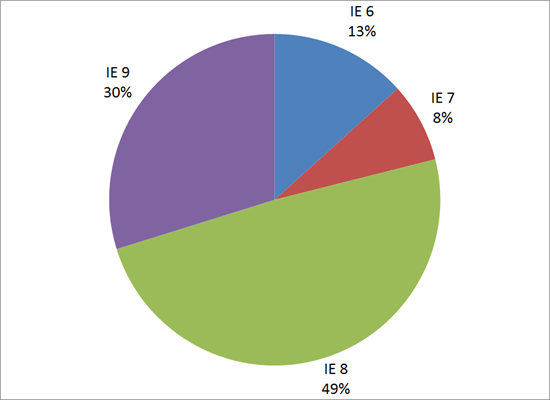 Internet Explorer (based on all browsers):

If we create our own rule of thumb that a browser is only worth supporting if it commands > 10% of the entire internet browser market, then we can determine that only IE8 and 9 are worth supporting.

Now, let’s put this in the context of other browsers, shall we?

If we keep to our rule of thumb that a browser is only worth supporting if it commands > 10% of the entire internet browser market, then we can determine that only Chrome 18 and Firefox 11 are worth supporting. It also means Chrome 19 and Firefox 12 are not worth supporting – but we should realize that these emerging versions ARE probably going to supplant their predecessors.

Isn’t that interesting? Is it less than you thought? It’s less than I thought!

This isn’t about who is best. That’s for you to decide. But “best” doesn’t really matter when you look at the numbers. The reality is, Internet Explorer MASSIVELY dominates the internet. Its market share is steady, and, insofar as 2012, it indicates growth. I think it is smart to consider your level of IE support.