This post will show the process of connecting a VPC to your Google Cloud VMware Engine environment, and we will use Terraform to do the vast majority of the work.

The diagram below shows the basic concept of what I will be covering in this post. Once connected, you will be able to communicate from your VPC to your SDDC and vice versa.

I’m assuming you have a working SDDC deployed in Google Cloud VMware Engine and some basic knowledge of how Terraform works so you can use the provided Terraform examples. If you have not yet deployed an SDDC, please do so before continuing.

All of the code referenced in this post is available in the gcve-network sub-directory. You will need to have git installed to clone the repo, and I highly recommend using Visual Studio Code with the Terraform add-on installed to view the files.

Google Cloud VMware Engine SDDCs can establish connectivity to native Google Cloud Platform services with private services access. This feature can be used to establish connectivity from a VPC to a third-party “service producer,” but in this case, it will simply plumb connectivity between our VPC and SDDC. Configuring private services access requires allocating one or more reserved ranges that cannot be used in your local VPC network. In this case, we will supply the ranges that we have allocated for our Google Cloud VMware Engine SDDC networks. Doing this prevents issues with overlapping IP ranges.

I have provided Terraform code that will do the following:

After Terraform completes configuration, you will be able to establish peering with the new VPC the Google Cloud VMware Engine console. To get started, clone the example repo with git clone, then change to the gcve-network sub-directory and you will find these files:

Let’s take a look at what is happening in main.tf, then we will supply the necessary variables in terraform.tfvars and run Terraform. You will see var.[name] appear over and over in the code, as this is how Terraform references variables.

You may think it would be easier to place the desired values directly into main.tf instead of defining and supplying variables, but it is worth the time to get used to using variables with Terraform. Hardcoding values in your code is rarely a good idea, and most Terraform code that I have consumed from other authors use variables heavily.

The file begins with a provider block, which is common in Terraform. This block defines the Google Cloud project, region, and zone in which Terraform will create resources. The values used are specified in terraform.tfvars, which is the same method we will use throughout this example.

The first resource block creates a new VPC in the region and zone specified in the provider block. Setting auto_create_subnetworks to false specifies that we want a custom VPC instead of auto-creating subnets for each region.

The next block creates a subnet in the newly created VPC. Notice that the last line references google_compute_network.vpc_network.id for the network value, meaning that it uses the ID value of the VPC created by Terraform.

This block and the following block (google_compute_global_address.private_ip_alloc_2) create a private IP allocation used for the private services configuration.

These last two blocks are where things get interesting. The block above configures the private services connection using the VPC network and private IP allocation created by Terraform. Service is a specific string, servicenetworking.googleapis.com, since Google is the service provider in this scenario. This value is set in terraform.tfvars, as we will see in a moment. If you find this confusing, check the available documentation for this resource, and it should help you to understand it.

The final block enables the import and export of custom routes for our VPC peering configuration.

Note that the final two blocks contain an argument that none of the others do: depends_on. The Terraform documentation describes depends_on in-depth here, but basically, this is a hint for Terraform to describe resources that rely on each other. Typically, Terraform can determine this automatically, but there are occasional cases where this statement needs to be used.

Running terraform destroy without this argument in place may lead to errors, as Terraform could delete the VPC before removing the private services connection or route peering configuration.

terraform.tfvars is the file that defines all the variables that are referenced in main.tf. All you need to do is supply the desired values for your environment, and you are good to go. Note that the variables below are all examples, so simply copying and pasting may not lead to the desired result.

Terraform will use Application Default Credentials to authenticate to Google Cloud. Assuming you have the gcloud cli tool installed, you can set these by running gcloud auth application-default. Additional information on authentication can be found in the Getting Started with the Google Provider Terraform documentation. To run the Terraform code, follow the steps below.

Following these steps will create resources in your Google Cloud project, and you will be billed for them.

Should you wish to remove everything created by Terraform, run terraform destroy , and answer yes when prompted. This will only remove the VPC network and related configuration created by Terraform. Your Google Cloud VMware Environment will have to be deleted using these instructions if desired.

Once terraform apply completes, you can see the results in the Google Cloud Console. 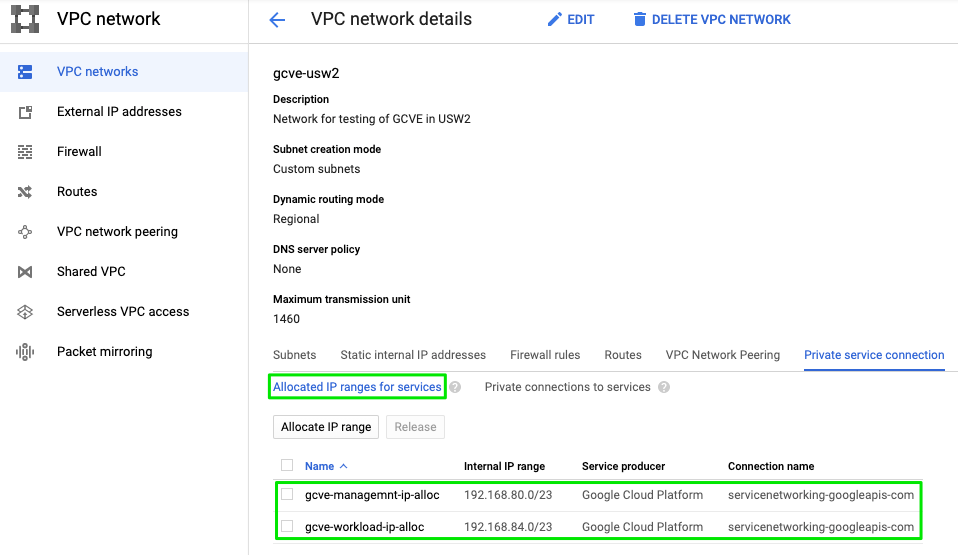 IP ranges allocated for use in Google Cloud VMware Engine are reserved.

Import and export of custom routes on the servicenetworking-googleapis-com private connection is enabled.

Save all of these values somewhere handy, and follow these steps to complete peering: 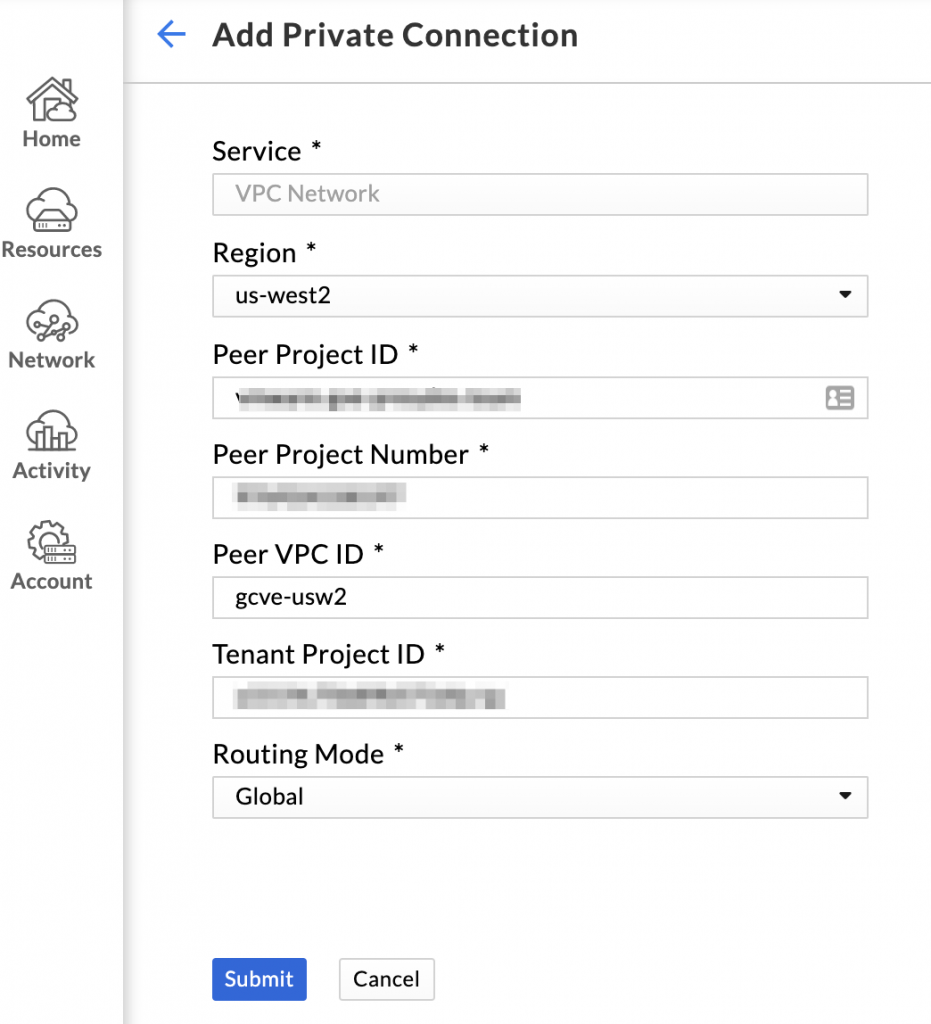 After a few moments, Region Status should show a status of Connected. Your VMware Engine private cloud is now peered with your Google Cloud VPC. You can verify peering is working by checking the routing table of your VPC.

Once peering is completed, you should see routes for networks in your SDDC in your VPC routing table. You can view these routes in the cloud console or with: 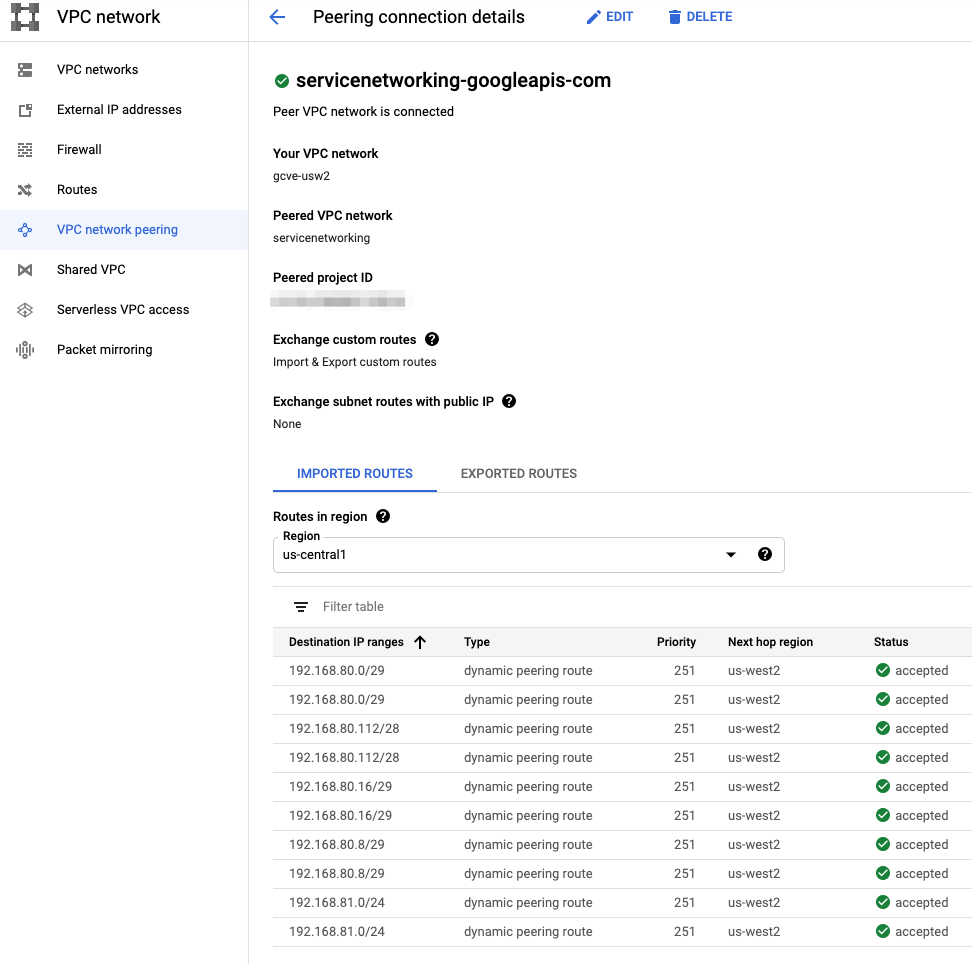 Well, that was fun! You should now have established connectivity between your SDDC and your Google Cloud VPC, but we are only getting started. My next post will cover creating a bastion host in Google Cloud Platform to manage your Google Cloud VMware Engine environment, and I may take a look at Cloud DNS as well.

Published at DZone with permission of Matt Elliott. See the original article here.