ant is an acronym for another neat tool . it is a build tool. it is used to automate complicated repetitive tasks like setting classpath, compiling the code or packing the compiled files and many more things which you can ever imagine. ant is developed in java so it is platform independent. ant accepts instructions in the form of xml documents thus is extensible and easy to maintain. you don’t need any special editor for writing ant files a normal text editor is enough.

if you are using some ide like eclipse then there is no need to download anything as most of the ide come with ant libraries.

ant file is an xml file. as ant is mostly used for building the project we name it as build.xml .
here you can see a snapshot of the build file. it is written to complie the code present in src folder. 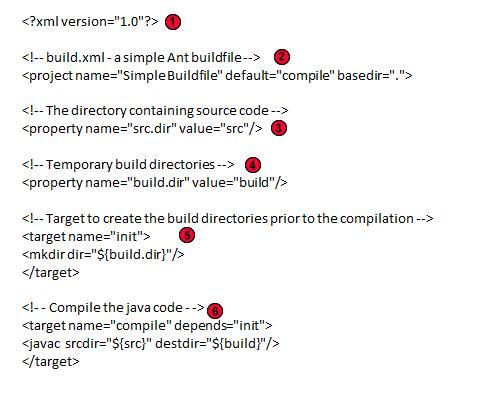 this is the declaration of the xml file with its version. all files must start by this.

this project element has three attributes.
1. name: here you will write the name of your project for which you are writing this file.
2. default: this is the default target to be executed by ant file.
3. basedir: this is the base directory(root folder) of your project. here . means current directory. if this is omitted the parent directory of the build file will be used.

this explanation is for you. do it yourself.

this element allows you to write your own variable with their values. you can define as many properties as you need. this is a name-value pair where you can access the value of a property by writing it in $ {&ltproprtynmae>}.
note: there is no space between $ and { }.

this target compiles the code. here the depends attribute specifies that this target depends on init to be performed. javac uses the system java compliler if you have not given the classpath explicitly. so to run this you should have all the java_home and path variables set.
srcdir is the source directory in which all the source file(.java) are present and destdir is the folder into which all the complied files(.class) will be created.

here we will write an ant file which will perform a clean build of the project. below you can see snapshot of the build.xml file. in this project we have all the source files in src folder and we have only one file helloworld.java to be complied.

as the code is self explanatory we will leave all the dicussed topics and will bring new important thing called dependency.
depends: when a target declares depends attribute then that target is only executed after the execution of the target on which it depends.

note: you can write more than one names of target in depends attribute like depends=”clean,init” and the execution is from left to right. so first clean will be executed and then init will get executed.be careful while declaring dependency. 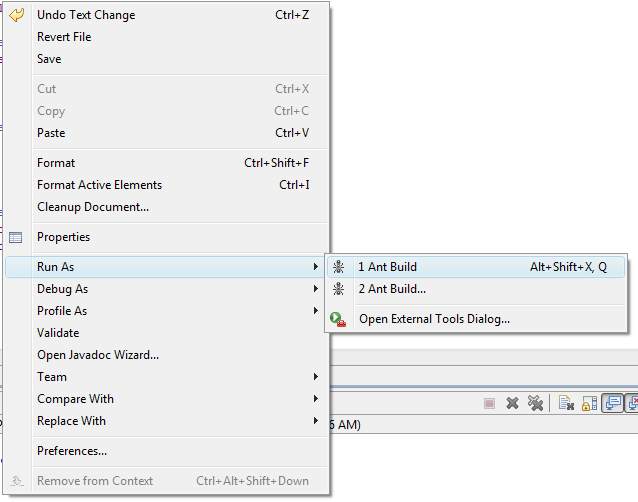 if environment variables like path and java_home is not set in your system than you will get an error as shown below.

so if you get this error message forst set all the variables and then restart the eclipse and run the ant file again.

note: in ant the error messages are well explained so error can be identified easily. if you set the verbose mode by giving the argument -v then you will get detailed log in the console.