there has been some noticeable increase in interest in kanban recently, with a number of people asking for more basic info, and more people writing new blogs and articles.  this is my attempt to describe in more detail my take on it all, which i refer to as kanban, flow and cadence.

a kanban system is a mechanism for controlling the work in the software development system.  kanban can be defined as “visual card”, as shown below – kindly written for me by kenji hiranabe [ ? ] at agile 2008. 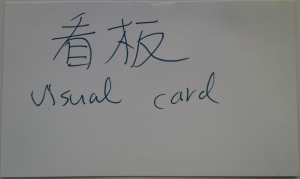 “the two pillars of the toyota production system are just-in-time and automation with a human touch, or autonomation. the tool used to operate the system is kanban.”

kanban is what enables a pull system for just-in-time work.

what does a kanban system look like for software development?  very simply, there is a queue of work, which goes through a number of stages of development until its done.  when work is completed in a stage, it goes into a downstream queue for the next stage.  when someone needs new work to do, they pull it from their upstream queue.  this can be depicted as below.

that looks very like a typical agile task board, with maybe a few more steps, although there is nothing to say there can’t be a single development stage. however, there is one more important element which really defines a kanban system – limits.  there are two basic limits – queue limits and wip limits.

queue limits are designed to avoid premature work.  this how just-in-time is achieved.  the limit should be large enough to keep the team busy (i.e. there is always something in it for the team to start work on), but small enough to avoid premature prioritisation (i.e. having things sitting in the queue for too long before they are begun).  ideally the queue should be fifo, although this is a guideline rather than a hard rule, as sometimes available skills or other resources mean that it is not always possible. 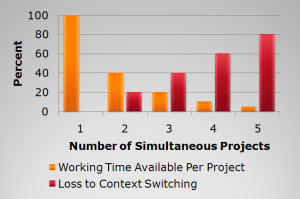 2) performing tasks sequentially yields results sooner.  as the diagram below shows, multi-tasking a, b and c (on the top), delivers a much later, and even c slightly later, than sequentially (on the bottom). 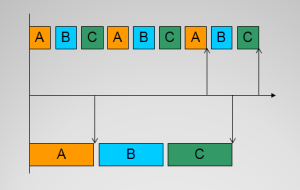 a great exercise to demonstrate the effects of multi-tasking was described by clarke ching .

throughput is also maximised by decreasing wip.  simple examples of this effect are traffic jams, where traffic speed reduces as more traffic builds up, and cpu load, where application performance goes down as cpu load increases.  the effect can be be explained by looking at little’s law for queuing theory:

finally, by having fewer work items in progress, then the team is able to focus more on the larger goals, and less on individual tasks, thus encouraging a swarming effect, and enhancing teamwork.

limiting work in progress like this can seem unusual for teams, and there is often a worry that team members will be idle because they having no work to do, but are unable to pull any new work.  the following guidelines can be useful to help in this situation.

they key question here are what constitutes lower priority investigative work or other interesting work.  essentially it is work which won’t create any work downstream, will improve future throughput and can be paused as soon as existing kanban related work is available.  lower priority work could be spikes or analysis for known impending work.  other interesting work could be refactoring, tool automation, personal development or innovation.

wip limit sizes can depend on type of work and size of team and should be adjusted to achieve maximum flow.  one approach is to start small (e.g. a limit of 1) and increase as necessary.  another is to start larger (e.g. a limit of half the team size) and reduce until the sweetspot is achieved.

flow describes how the work in the system can delivery maximum value.  as mary and tom poppendieck write,

“in lean enterprises, traditional organizational structures give way to new team-oriented organizations which are centred on the flow of value, not on functional expertise.”

“a minimal marketable feature is a chunk of functionality that delivers a subset of the customer’s  requirements, and that is capable of returning value to the customer when released as an independent entity”.

the kanbans should be minimal so that they are as small as possible in order to enable progressive delivery  to realise the product sooner, reduce feature bloat and focus on the the core features which are the most important, and minimise complexity because each feature has a cost to a user.

the kanbans should be marketable in a number of ways.

a useful guideline is that an mmf is marketable if it is something that could be written about on a product blog.

the kanbans should be features which are distinct, deliverable and observable.  the invest acronym (independent, negotiable, valuable, estimable, small, testable) as described by bill wake , can also be useful for applying to mmfs.

the marketable element of mmfs means that they may sometimes be larger than typical user stories, which often break work down such that while they can be incrementally delivered, and show some element of value, they are not marketable in their own right.  therefore, it is important to understand an mmfs value stream in order to deliver the whole mmf as quickly as possible.  a value stream describes the steps, delays and information required to deliver a product, and can often be used to decide the steps in an initial kanban system.  with large mmfs, the user stories become more of an analysis technique in order to enable incremental delivery of an mmf, without losing sight of the overarching mmf.  i describe how a continuous flow can be achieved with mmfs in the anatomy of an mmf .

a number of techniques can help manage the relationships between mmfs and user stories in order to realise the benefits of both.  one is user story mapping, as descried by jeff patton . 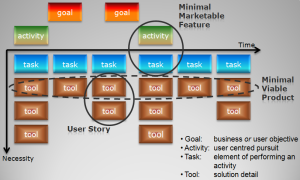 i have also recently been working in a regulated environment where user case goals and sub goals have provided the mmfs, with the detailed scenario paths and steps providing the additional details.

a further enhancement is to use two-tier kanbans, with one tier for the mmfs, and another for the user stories. 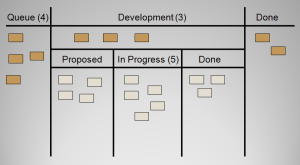 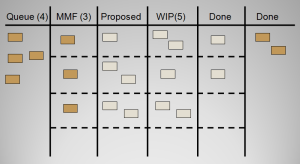 the consequence of applying the concept of flow is that emphasis is placed on using larger, value-focussed mmfs, rather than smaller, more incremental stories.

cadence is the approach to achieving commitment and reliability with a kanban system.  i often get a question something along the lines of,

“if the team isn’t estimating or planning with fixed time-boxes, how can it make reliable commitments?”

the time-boxed iteration is one form of cadence, which couples planning, review and release together.  a kanban system de-couples these events and allows them to have separate cadences, as well as adding two additional ones.  throughput is the amount of output of a process in a given period of time, and cycle time is the length of time to complete a process.  the relationship between the two is:

throughput allows forecasting of future capability, without needing to specify what might be delivered.  cycle time allows commitment by becoming an sla with the business (see kanban commitment ).  where the size of work varies, from large new features to small fixes and change requests, then a classification of mmfs can enable a range of cycle-times.  both throughput and cycle time can be charted and trended, in a similar way to xp’s velocity, as a means to encourage the team to improve.  a cumulative flow diagram can also make visible how the work is flowing through the system and highlight bottlenecks. 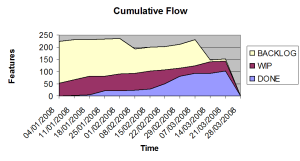 the consequence of cadence is that commitment and reliability is achieved though measurement as opposed to planning.

they key points of kanban, flow and cadence are:

further resources and information can be  on my kanban page , including most of the material which has influenced and directed my thinking.

Published at DZone with permission of Karl Scotland. See the original article here.