Application development has evolved, and therefore new needs have arisen when it comes to testing and new tools to deal with them. Let’s take a look!

We have gone from having monolithic architectures to applications based on (micro) services. Why do I say (micro) services instead of microservices? Because although the literature talks about the evolution of development from monolithic applications to applications based on microservices, in reality, we often find ourselves with the integration of services (as is, without the need for them to be micro). The concept at hand applies equally well to the concept of microservices as it does to services, so from here on we will simplify using the term services.

Let’s imagine an application for managing worklogs, tasks, worklog reports…. The scheme of this said the service-based application could be reflected in the following scheme. 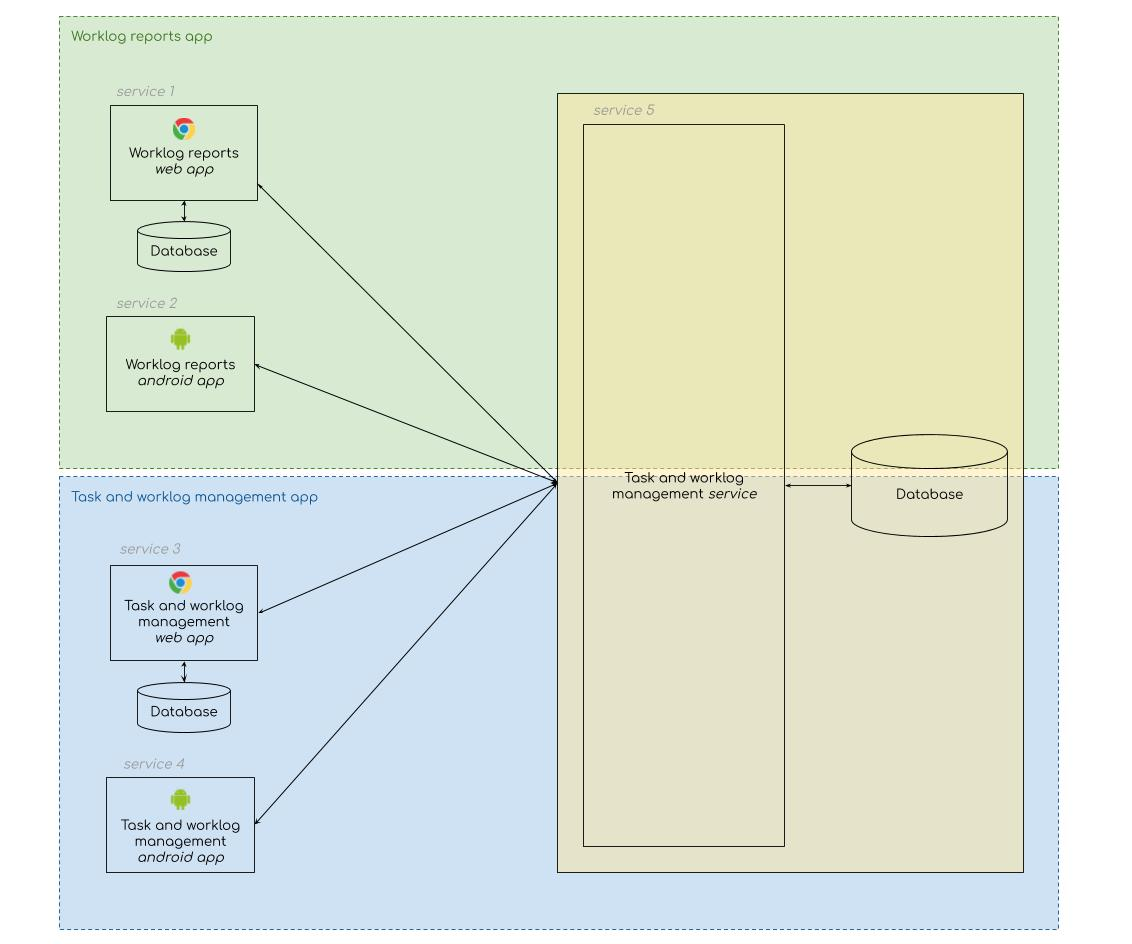 The example shown in the previous image is quite simple. We would have two applications (one for the generation of reports and another for managing tasks and worklogs) and both would have on one side their implementation of a web application and their mobile application.

The 4 services would consume a common service in charge of the overall management of tasks and worklogs. We could have more complex examples, where a service consumes another that in turn is consumed by a third party, etc. but to better understand the concept, instead of adding complexity, we are going to simplify it even more by zooming in on the previous image.

As shown in the image, we have reduced the example to a web application that is responsible for making work log reports and that accesses a REST API to obtain information. We are going to establish the terminology that we will use from here on:

Having clarified these two concepts, we’ll make the most of using SERVICE to refer to each one of the functionalities offered by the producer.

Let’s see some possible code snippets of each:

The consumer requests to /worklogs/worker/username?day=date with a specific username and date and calculates the status based on the worklogs received.

The producer has an entry point for the URL /worklogs/worker/username?day=date and makes a database query to retrieve the user’s worklogs on a specific date and return them.

This complete code, as well as the rest that we use in the different examples, is available at Github.

So far then, a little introduction or snapshot of the evolution of application architecture and a context to define some concepts that we will use throughout the article. Now let’s go back to what interests us: quality and testing. How would we test our application? What testing “tools” do we have at our disposal to test an application of this type?

As we have said, the consumer remains a web application that accesses another application, which offers us its services through a REST API, the producer. We have a backpack full of tools and resources that can help us to test each of these two components in a watertight way: unit tests, integration tests, parameterized tests, JUnit 5, TestContainers, Mockito, Pitest…

For example, in the consumer, we could test the services that include the calls to the REST API by mocking/stubbing the responses from the server. Let’s see what some of those tests might look like.

This is just an example of a test that we could do. We have used the example to test MockWebServer, but we could have directly mocked WebClient or used one of the other alternatives which exist such as Wiremock, TestContainers….(in the not too distant future we’ll meet them again for sure ;)).

In the producer, we could also test the REST API using the tools offered by SpringBoot. Let’s look at it too through an example.

With these (and other tests) we could have a well-tested consumer and producer, but we are missing an important part: ensuring that they work together correctly. What might happen if there were a change in the producer? Let’s suppose something as simple as changing the name of a parameter (for example, instead of day it is renamed date).

We would make the necessary corrections to the tests for our producer.

And perfect! the tests will continue to work on one component as well as the other.

We must avoid this, but can we? If we go back to look in our backpack (which I like to call testing toolbox) we find the functional tests or end-to-end tests. If we had added some of these tests to all of the above, then we would have tested the integration of the entire system and we would be able to detect the previous problem before reaching production.

Although this is a solution, reality shows us that this type of test is not easy to carry out/maintain because it is more complex, forcing us to have consumer and producer running (which entails the start-up of the entire system) or it forces us to have 100% implemented the functionalities in both components to be able to carry out the tests.

And while that’s simple in this example, in a more complex one… So, isn’t there some way of simplifying the communication test between the consumer-producer? The business logic of each of them is tested in a watertight manner, therefore, it would actually be necessary (and sufficient) to ensure that both meet a particular specification… to verify that there is an agreement between consumer and producer and that both keep to it, nothing more (and nothing less).

Do we have anything to help us do this? Of course! We have a tool whose objective is just this, called Contract Testing. Soon we will publish a new post with a practical example. Stay tuned!

Published at DZone with permission of Jessica Aguado. See the original article here.