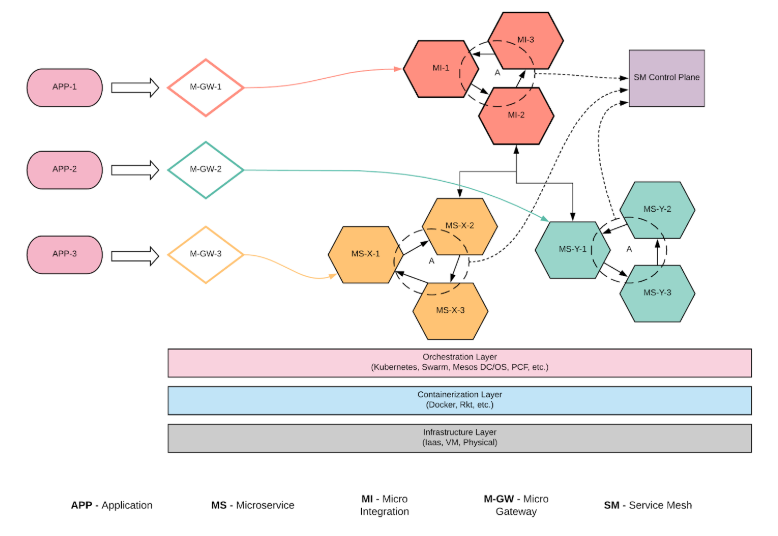 We also have the three diamonds, which demonstrate the API micro-gateway functionality where these gateways offer functionalities like security, caching, throttling, rate limiting, and analytics capabilities to the upstream microservices layer. In this diagram, we have used three different micro-gateways for three groups of microservices. This can be extended in such a manner that each MS or MI can have its own micro-gateway.

A Micro API Gateway is a special component in this architecture since it has some cross-cutting features which are already available in other components. If we take the functionality of the service mesh, it has some capabilities like load balancing, service discovery, and a circuit breaker, which are already available in the micro-gateway. It is important to understand that these functionalities are available for internal, inter-microservice communication while the micro-gateway uses these functionalities to expose services externally. This means that we cannot dismiss the necessity of an API gateway within a service mesh-type architecture.

The other cross-cutting component which overlaps with the micro API gateway is the micro-integration layer, where some capabilities like service orchestration, transformation, and composition can be done. We also need to clearly understand that the micro-integration layer offers these capabilities for internal services and at the developer level. However, the types of capabilities available at the micro-gateway are more towards the external user interaction layer, and sometimes users can directly use these features, like API composition to build their own APIs.

On the other hand, using a Micro API Gateway as a replacement for service mesh or micro-integration layer is not recommended, even though it can serve the purpose in some cases. That approach will introduce a lot more complexities when your system grows in the future.

The next advancement of the service which offered in this micro-architecture is the serverless (or Function as a Service - FaaS) capability to developers. Any technology vendor can combine the infrastructure layer with the micro-gateway and micro-integration capabilities hosted on their data centers to offer the serverless service to their customers, so that customers can write their implementations in their preferred programming language and run them as microservices under the hood within their infrastructure. In a serverless world, MS-type implementations will be done by the users and all the other components will be deployed, hosted, and maintained by the cloud provider.

As the last piece of this article, I’ll share some of the existing technologies we can utilize to realize this micro-architecture.