With massive competition in the market, every company wants to employ a faster go-to-market strategy. This puts a lot of pressure on both the development and testing teams. As not only the development cycle has to be faster, but you also need to make sure that testing efforts keep up so that the end product is of high quality. Also, as the product grows, it becomes more intricate, and the chance of outage in the code increases.

This requires consistent testing efforts and running some of the test cases repeatedly. It can become quite hectic and costly, as often companies have limited resources, and they can’t afford to put them all in testing. To tackle this issue, many organizations are using Selenium test automation, to automate the testing process.

A lot of agile organizations are now employing automation testing right from the beginning of their development process. Be it unit or end to end testing, they are doing everything they can to shorten the test cycle. As well as to catch potential bugs at an earlier level without repetitive testing and make development more swift. Nightwatch.js is one such javascript testing framework, which helps organizations automate their testing process.

In this Nightwatch.js tutorial, I will give you an overview of Nighwatch.js with Selenium. So, let’s get started!!

Nightwatch.js is an open-source, node.js powered, automated browser testing framework. It was developed in Amsterdam and derives its name from the famous painting ‘The Night Watch’ by Dutch 17th century artist Rembrandt van Rijn.

Nightwatch.js facilitates end-to-end testing of web applications and websites, by utilizing W3C Webdriver API (also known as Selenium Webdriver) as Selenium wrapper for interacting with different browsers. It helps in making the implementation of CI/CD much easier. At the same time, it can be used to perform Selenium test automation for both unit and integration tests. This popular automated browser testing framework provides several commands and assertions to perform interactions with web elements.

It is, at times referred to as a Selenium Binding library only, which is entirely true as it is mostly used together with Selenium Server. But while implementing, the tester must remember that Nightwatch.js in itself, is complete as it contains a built-in CLI test runner, an extendible command and assertion library, and support for page object model.

Nightwatch.js works by communicating with WebDrivers of different browsers, like ChromeDriver for Chrome or GeckoDriver for Firefox. It does this communication over a restful HTTP API utilizing the HTTP protocol defined by W3C WebDriver API and derived from JSONWire protocol.

Nightwatch.js sends two requests to the WebDriver server in order to perform any browser interaction. It can be a command, an assertion, or even an action on page objects of the web application.

All major browsers have a categorical WebDriver implementation, called a driver, which Nightwatch.js uses behind the scenes to communicate with the browser. 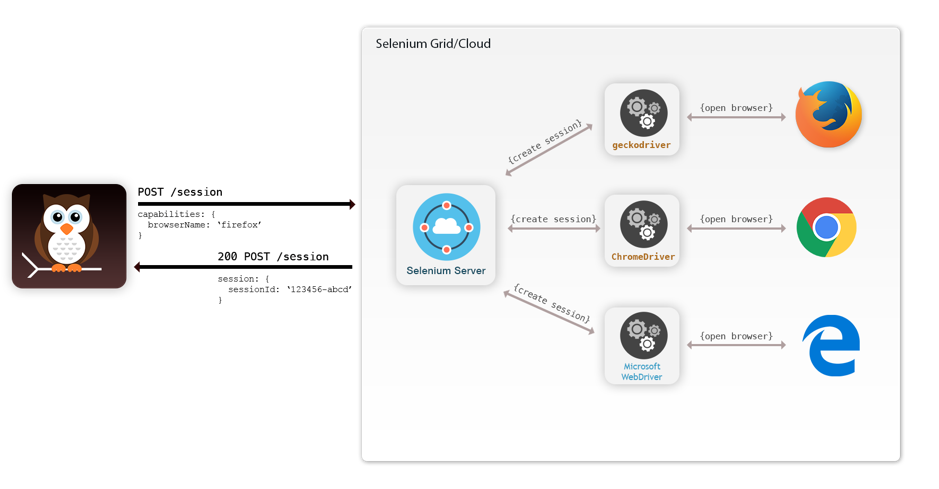 What Makes Nightwatch.js So Popular?

In this Nightwatch.js tutorial, so far I have explored what Nightwatch is and how it works. Now, I’ll explain some important reasons for its popularity. The advantages it provides so that while utilizing it one can make the best of the offerings that come with this Selenium test automation framework.

Having perceived the reasons for tremendous popularity and all the benefits of using this automated browser testing framework, it’s hard to think of any bottlenecks associated with it. But there are a couple of drawbacks which I’ll explore in this Nightwatch.js tutorial you should look out for.

In this Nightwatch.js tutorial, I covered the basics for the automated browser testing framework. By now you are aware of what nightwatch.js is, and how it helps us with Selenium test automation. Further, I explored the features of Nightwatch.js which makes it really popular along with a couple of its drawbacks you need to look out for!

I hope you found this Nightwatch.js tutorial informative, in case of any doubts or questions, do reach out to us in the comment section down below. Help us reach out to your peers by sharing this article with them on Twitter and LinkedIn or any other social media platform they use. That’s all for now.

Published at DZone with permission of Rahul Rana . See the original article here.