So what is it?

SSL stands for Secure Socket Layer, but that still probably doesn’t mean a lot, so what is it and what does it do?

Why do we need a secure channel, don’t we have passwords for that?

Passwords are a means of authentication, which will verify a user is who they claim to be. However, if the channel on which the passwords are transmitted is not secure, they can be intercepted and the identity of the user will be compromised, allowing someone else to authenticate as said user.

Take this scenario as an example:

User A is logging in to server X on the network. Somewhere else on the network, a hacker has connected and is using a packet sniffer, a tool for capturing network packets containing data such as HTTP traffic, with which they are looking for the user credentials of people authenticating over insecure channels such as plain HTTP. 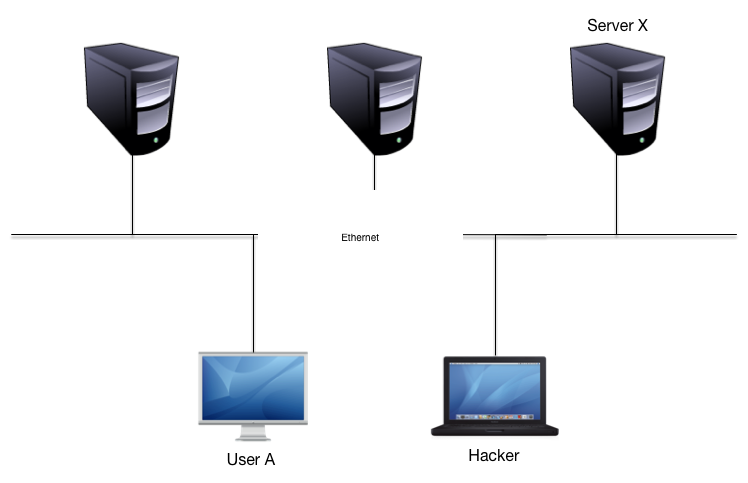 Let's say I was logging in to my mail server webmail.register.it via plain HTTP and that my username is blah@blah.com.

Below is a screen shot of a packet capture using the Wireshark packet sniffer tool: 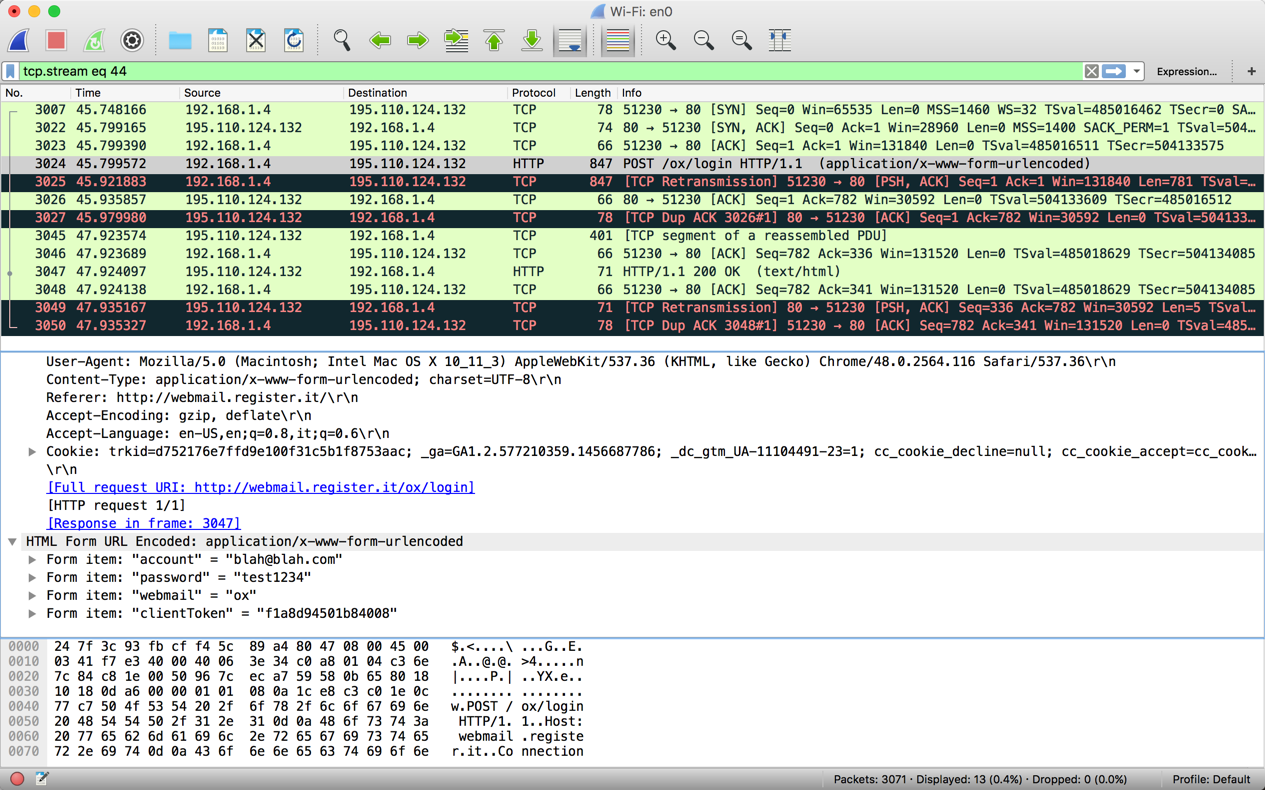 If I had logged in to the mail server over HTTPS, the hacker would not have been able to see my username blah@blah.com and password "test1234" as the packets would have been encrypted.

So, how do we secure the communication channel?

So, we have now seen how the channel is secured but we still need to understand how the identity of the server is verified.

Four conditions need to be checked to verify the identity of the key owner:

So, let's look at these one by one.

I’ll use an example of something called a Man-In-The-Middle attack.

I connect to server X over SSL, or at least, I think I have. The server presents me with a certificate that isn’t for server X but for server Y. If I do not verify the hostname against the certificate name, Server Y could have used DNS poisoning or some other means to fake being server X and is using his own certificate to fool you into believing the connection is secure. However, you are now passing private information to some unknown party.

Therefore, a check should always be made to make sure that both the hostname and the certificate name match. This still does not guarantee you are talking to the desired server if the other conditions have not been met.

If, in the above Man-In-The-Middle attack, server Y had used a self-signed certificate (i.e. one that someone had created for themselves) then verifying the certificate name against the hostname would give a positive result, but the certificate would still not really be the proper certificate for server X.

So, how do we get around this issue? Well there are a number of bodies around the world called Certificate Authorities that before issuing certificates carry out certain checks on the companies or individuals that have requested the certificates. Examples of these are Verisign, Thawte, and Digicert... there are many more.

If this is all in order then we still have a couple of checks left to do.

Our last check is to verify that none of the certificates in the chain has been revoked, either because the company has been found untrustworthy or the certificate was compromised in some way such as theft, etc.

If all of the above checks have had positive results then we can pretty much be certain that the connection can be trusted. This is not 100% certain because someone could be taking advantage of ZERO-Day bugs or vulnerabilities and may have compromised the certificate and be using it before anyone has had a chance to react. Generally though, you can rely on these checks being sufficient.

So far, we have only covered the most common case which is Server authentication, where the end user is verifying the identity of the server.

The sequence of events for server authentication can be seen in the diagram below: 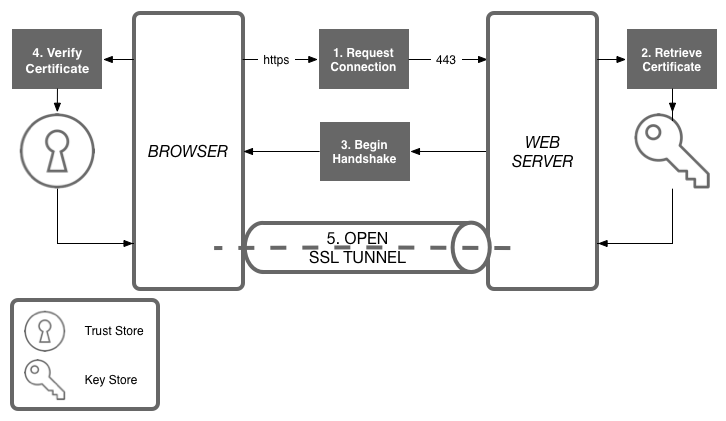 The user requests a resource from the server using HTTPS which communicates on TCP port 443, and the server retrieves its public key from the key store and supplies it during the handshake to the user’s browser. The users browser then checks its validity and, if everything is ok, completes the handshake sending back the shared key which is used to open the SSL tunnel for secure communication.

There is another case though called client authentication or sometimes referred to as mutual authentication. In this case, the server also verifies the user.

The sequence of events for client authentication can be seen in the diagram below: 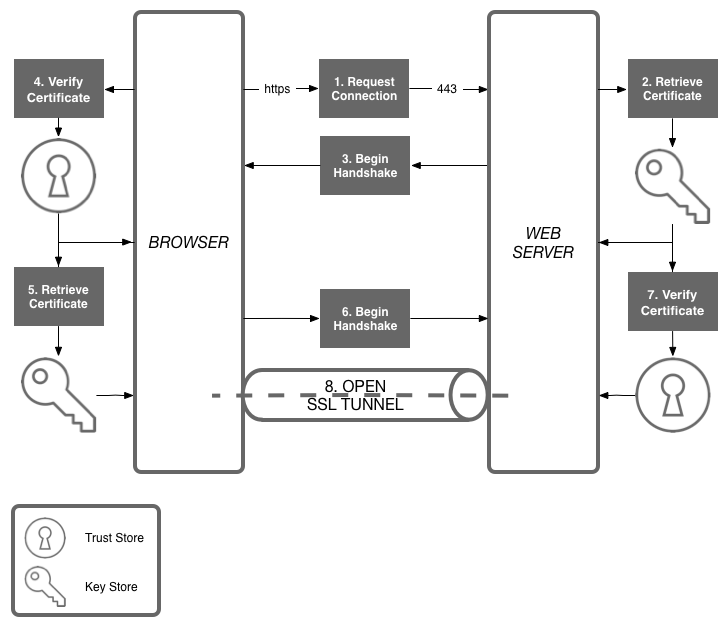 It is much the same as that for server authentication only upon verification of the server certificate the client then sends his public key to the server for verification before the SSL tunnel is opened.

The advantages of SSL are:

To round off this article a word on Keystores.

Physically they may be the same container. Although in this way a single password would be required to access both certificates and keys.