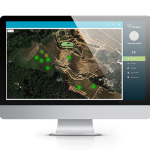 i’ve written a number of times recently about the increasing digitization of agriculture, with huge amounts of data being generated to inform everything from irrigation to the health of livestock.

one of the more interesting trends is the use of drones to capture crop data to better inform irrigation and fertilization of the crops.

a recent project from researchers at penn state suggests an alternative method of capturing such data. rather than relying on drones, they utilize plant-based sensors that are designed to capture the thickness and electrical capacity of leaves.

an israeli company, called viridix , hope to bring such ideas to market. they have a network of sensors that distributed across land to collect data from the soil. the data is then placed onto a platform for app developers to then build tools on top of.

whereas the penn state team aimed to detect soil moisture from observing the leaves themselves, the viridix team use sensors in the soil itself to monitor ground moisture levels. the technology, which they call roottens, aims to capture every bit of information about the soil a farmer could want.

it then teams up with irrigation partner i-dripper to ensure that each plant gets exactly the feed it needs. the system is designed to run without electricity and is resource friendly in its ability to monitor the health and needs of plants in the ecosystem.

it’s probably fair to say that we are still at the early stages of the use of data in agriculture, but viridix is a nice example of how data is being used to make farming smarter and more efficient.