Embedding web servers have traditionally been used as an easy solution for managing equipment by using any standard browser. Unless a tunnel such as Virtual Private Network (VPN) is used, managing the equipment is limited to the local Intranet where the equipment is installed. However, setting up and operating a VPN solution is challenging, technical, and costly if IT personnel are needed for the VPN setup and maintenance.

A configuration-less alternative to VPN is to use a type of IoT solution known as IoT bridge mode. A device can act both as a web server for local use and as an IoT edge node for remote use. The following figure depicts such a setup. 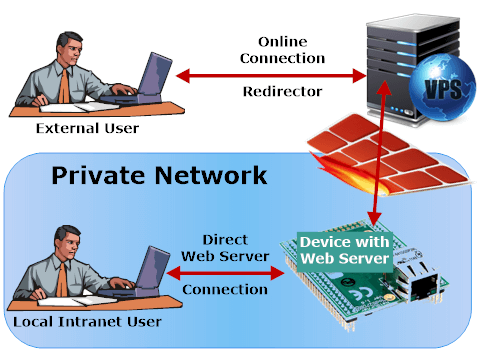 An online server acts as an IoT connection bridge between the remote user and the device. When the device is running in IoT mode, the device operates as a network client. As you probably already know, network clients typically do not need any network configuration for connecting out to services on the Internet.

The source code and detailed instructions for how to set up your own IoT bridge mode server can be found on GitHub. A demo server is available below.

The IoT bridge mode demo can be found here.