A notoriously murky area of single-page application (SPA) development is SEO. Depending on who you ask, search engine crawling of client-rendered content is either totally fine, fine as long as it's synchronous or not at all fine.

Due to the confusion caused by all this conflicting advice, I regularly see the question "is my Vue SPA okay for SEO?" come up in places like the Vue.js Developers Facebook group, the Vue.js Forums, and r/vuejs on Reddit.

In this article, we'll challenge the popular opinions, do doing some basic tests, and try to conclude with some sensible advice for building SEO-friendly SPAs.

The standard implementation of a single-page app provides a page "shell" to the browser without any meaningful content included. The content is instead loaded on demand from the server with AJAX and then added to the page by JavaScript.

This allows a user to view the "pages" of an SPA site without a page refresh, theoretically improving UX. 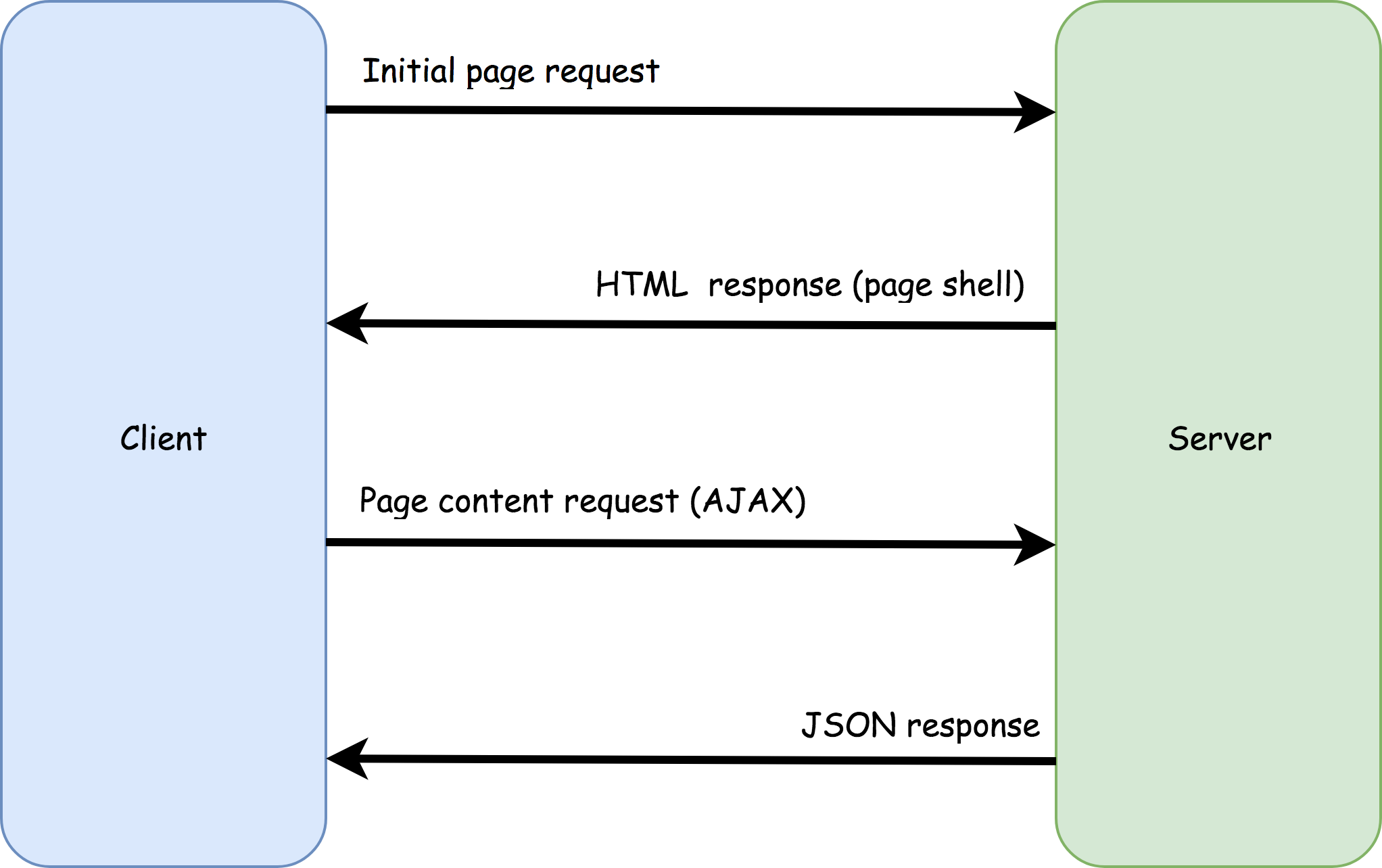 While this architecture works for human users viewing the page in a browser, what about search engine crawlers? Can crawlers run JavaScript? If so, will they wait for the AJAX calls to complete before crawling the page?

It's important to know this, as it could determine whether or not the site's content is indexable by a search engine, and just as importantly, how well its content is ranked.

In the early days of the web, Googlebot would only crawl the static HTML provided in a page. It was announced in 2014, however, that Googlebot would now attempt to render JavaScript before it began crawling.

To help debug any issues with rendering a JavaScript-modified page, Google provided webmasters with the Fetch As Google tool, which shows a snapshot of what Googlebot sees at a particular URL.

One common myth is that Googlebot won't crawl asynchronous JavaScript. This article has done a great job of busting it. TLDR; Googlebot will wait at least 20 seconds for asynchronous calls to complete!

How Googlebot Sees an SPA

The quintessential Vue.js SPA example is the Vue HackerNews Clone 2.0. This is an open source project provided by the Vue team to demonstrate the full capabilities of Vue and effective design patterns. 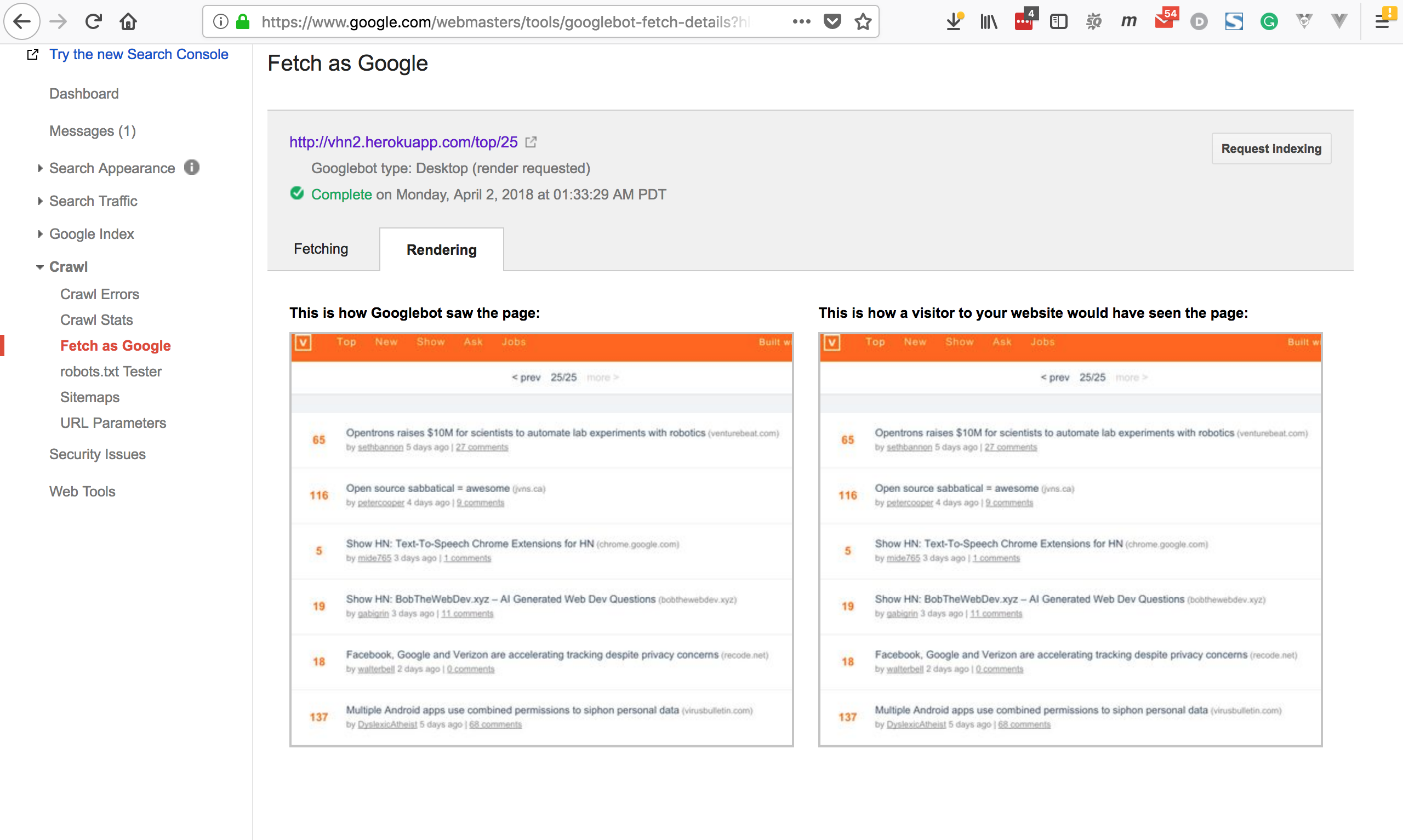 One of the key features of the Vue HackerNews Clone 2.0 is server-side rendering (SSR). This means, unlike a more basic SPA, the content for each page is rendered on the server and provided to the browser on each page load, just like it were static HTML.

What we're trying to understand, though, is how Googlebot sees client-rendered content. For this reason, I switched SSR off and ran the test again: 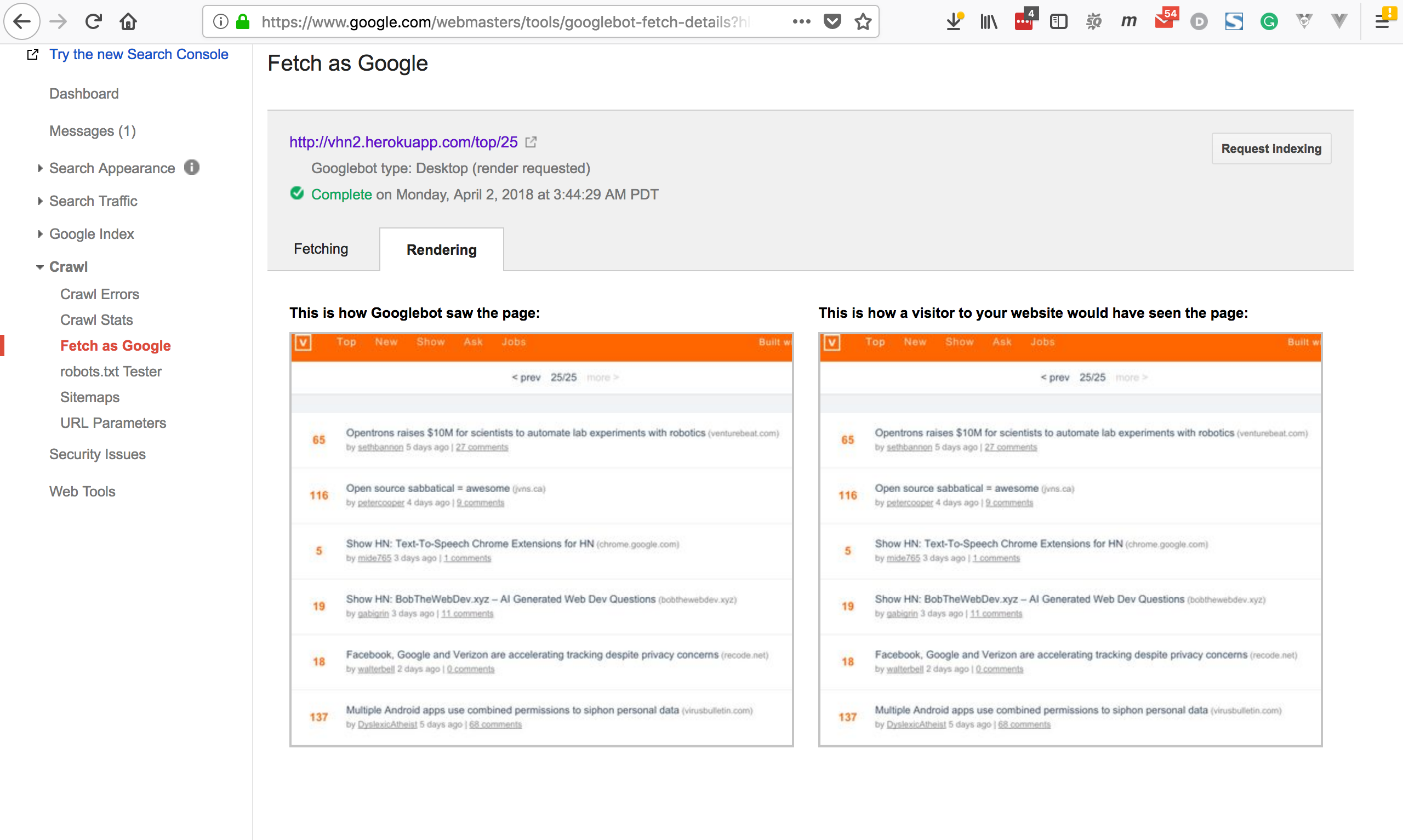 Even with client rendering only, Googlebot had no trouble seeing the content. I also waited a few days to see if Google had indexed the app. It had: 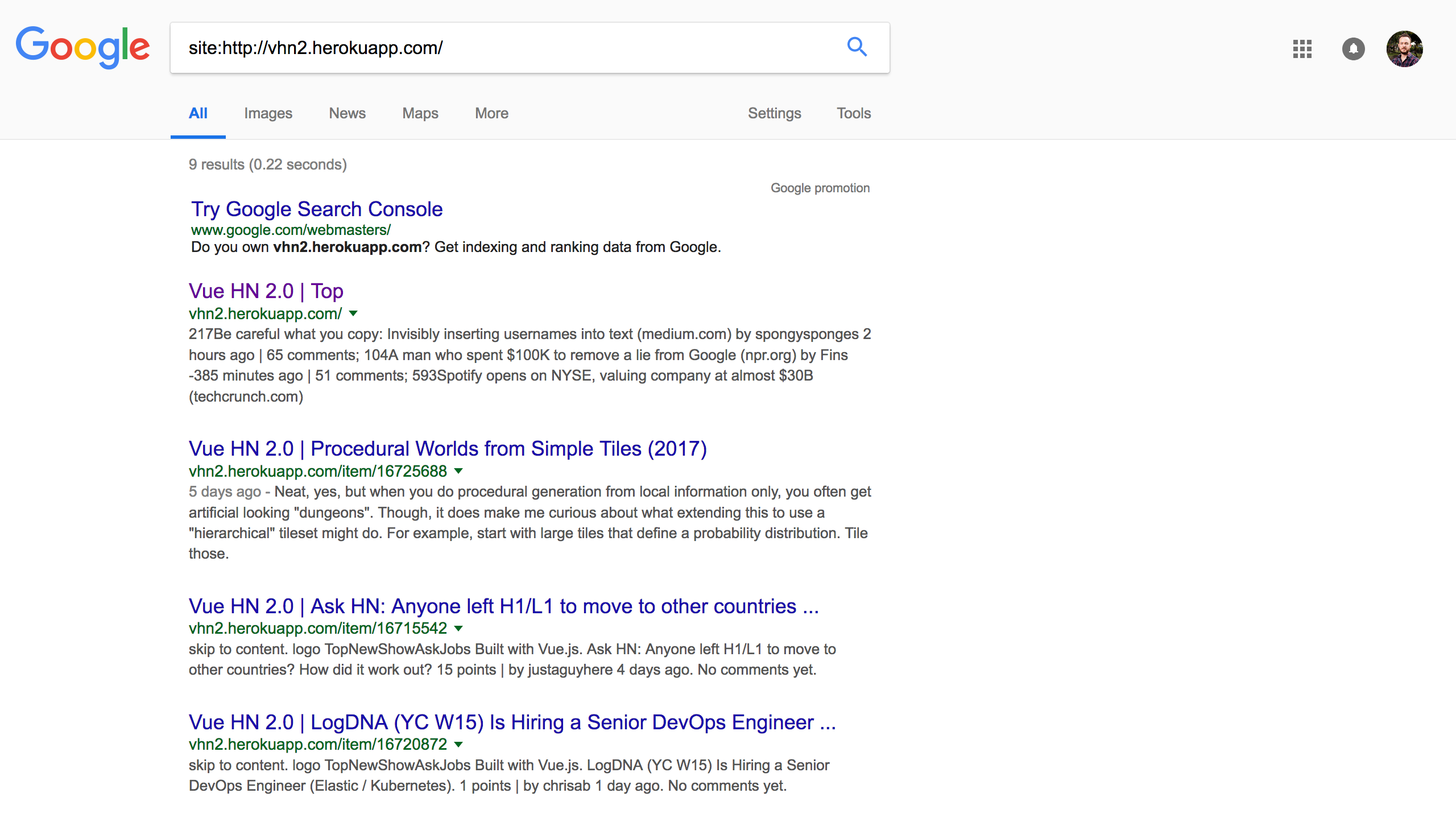 While this test seems to satisfy any concern about client-rendered content, there are some reasons why you shouldn't have full confidence in it:

Be Skeptical of JavaScript

Googlebot had no issues rendering Vue HackerNews. But we shouldn't conclude it can render all JavaScript so flawlessly. Google's 2014 announcement about JavaScript rendering made it clear that there would be no guarantee, although most developers seem to have overlooked that.

Just like a browser, Googlebot must have a JavaScript engine with a particular subset of implemented web standards and ES features, and its particular idiosyncrasies for how those are implemented.

According to this video from Google developers Addy Osmani and Rob Dodson (released Nov 2017), Googlebot is currently based on Chrome 41. There are a lot of new APIs that have been released since version 41, and if you used any of them, presumably Googlebot would not be able to render and index your page.

Don't forget the "O" in "SEO" stands for "optimization." Being indexed be a search engine is not enough; we want our sites to rank well, too. Fetch As Google tells us how a page is seen, but not how the page compares to the competition.

There's an interesting comment on the article SEO vs. React: Web Crawlers are Smarter Than You Think made by SEO expert Barry Adams. On the topic of how search engines rank SPAs he said:

"What happens when you use React without server-side rendering is that the crawler halts on the very first page because it can’t see any hyperlinks to follow...It makes the crawl process incredibly slow and inefficient. And that is why websites built on React (and similar JavaScript platforms) perform worse in Google than websites that primarily serve plain HTML to the crawler....plain HTML websites can be crawled very efficiently, newly added and changed content will be crawled and indexed much quicker, and Google is much better able to evaluate the crawl priority of individual pages on such websites."

While he doesn't provide any evidence for this, it does seem to be inline with the philosophy of other ranking determinates like page speed.

What to Do if SEO Is Critical

The bottom line is, if SEO is critical, you can't rely on your SPA's client rendering and must ensure content comes included in your pages.

This doesn't mean you need to abandon the SPA architecture, though. There are two techniques, server-side rendering and prerendering, that both can achieve the desired outcome.

Server-side rendering (SSR) is where a page is rendered by the web server as part of the server request/response cycle. In the case of Vue.js and other similar frameworks, this is done by executing the app against a virtual DOM.

The state of the virtual DOM is converted to an HTML string, then injected into the page before as it is sent to the client. When the page reaches the browser, the JavaScript app will seamlessly mount over the existing content.

SSR guarantees your page will be crawler friendly, as the page content is complete regardless of how, or even if, the crawler runs JavaScript.

SSR has its downsides, though:

Tip: frameworks like Nuxt.js come with server-side rendering out of the box.

If you can't use SSR for one of the above reasons, there is another way: prerendering. With this approach, you run the app with a headless browser in your development environment, snapshot the page output, and substitute your HTML files with this snapshot in the server's response.

It’s pretty much the same concept as SSR, except it’s done pre-deployment, not on a live server. It's typically performed with a headless browser like Chrome and can be incorporated into a build flow with Webpack, Gulp, etc.

However, prerendering also has downsides:

If you're keen to implement prerendering in a Vue.js app, I've written a guide on this blog: Pre-Render A Vue.js App (With Node Or Laravel)

Tip: prerendering for SEO can be purchased as a service from prerender.io

Many developers saw Google's 2014 announcement about JavaScript rendering as an end to SEO concerns about SPA content. In fact, there's no guarantee that Googlebot will correctly render a page, and, if it does, it still may rank the page lower than static HTML pages in competing sites.

My advice: if you are going to use the SPA architecture, be sure to provide server rendered or prerendered pages.