I have always wondered what the exact definition of software modernization is. Is it upgrading the software technology stack to the current one? Is it bringing in process automation? Or, has it more to do with replacing custom build apps with COTS or vice-versa? Can it be as simple as bringing in a better hosting solution in the form of the cloud? On further reflecting on drivers and need for modernization, you realize that its more to do with:

While many among us would have various definition of modernization, I would rather think of dividing modernization into five categories:

What is the Relevance of Open Source to Modernization Types?

If we take a deeper dig, we see that in each of the above categories of modernization, open source plays a significant role.  It’s also very crucial to how we can future-proof organizations' architecture against all odds. Digital disruption will create a "leaders and laggards" situation, where the lack of an open source strategy will create significant strategic disadvantages within the organization.

Now let’s see how open source plays a role in different a categories of modernization.

One of the biggest challenges in industry today is controlling turnaround time (TAT) for critical business transactions. The challenge can be extremely disruptive and pose a significant threat to an enterprise. Controlling TAT has a major influence on administrative cost savings. Automation can drive modernization to reduce the challenges industries are facing. There can primarily be three kind of automation.

DevOps is about automating release cycles, and it’s the next level of progression for release engineers, infrastructure engineers, and build engineers. Leading open source tools that aid in the modernization of software turnaround time are:

BPA tools help in minimizing the inefficiencies and boosting our customer engagement. Open source has also contributed to business process automation with tool like JBPM, Camunda, and Activity.

One of the biggest disruptions in application modernization in the recent years has been led by microservices. This architecture pattern has paved the way for various frameworks and patterns on the modernization journey and again, open source leads most of them.

Open source frameworks like Node.js, Spring, Vert.x, and Wildfly are the most widely used microservices development framework. Not to forget we have the serverless patterns which has been built on open source frameworks that get hosted on cloud without really worrying about the underlying infrastructure and the scaling.

While we talked about open source’s involvement in DevOps, now let me tell you a bit more about the latter aspect of modernization that aids development and deployment of microservices.

Containers have been the main reason for the success of microservices architecture patterns. The ease of deployment and hosting of applications and containers almost anywhere is made possible by the open source container platforms. It’s a no-brainer now for any industry that to achieve agility, scalability, portability, across various infrastructure hosting platforms, they must adopt the use of containers.

We also call them Platform-as-a-Service offerings from our respective partners as well.

This might be the least discussed topic on open source involvement. However, many of us might not know that open source’s contribution to cloud and infrastructure's modernization is equally crucial.

The open infrastructure landscape is evolving. Users integrate dozens of open source tools in the datacenter on-premise, private and public cloud. Software can control large pools of compute, storage, and networking resources throughout a datacenter, managed through a dashboard exposed via APIs. Right from deploying to managing large set of virtual machines, open source technologies makes its presence clear.

Prominent open source technologies that are behind the managing of large infrastructure and network resources across multi-cloud and multi availability zones are:

Any modernization can be successful when the modernization is targeted towards the end-to-end ecosystem, rather than targeting modernization in silos. Software development can be infrastricture-centric, platform-centric and business-centric. The best results are achieved when the approach is taken with platform and business centric mindset.

With this mindset, it’s important that all the layers of the system architecture is considered as part of modernization. So, what are the layers we should typically consider? These are: 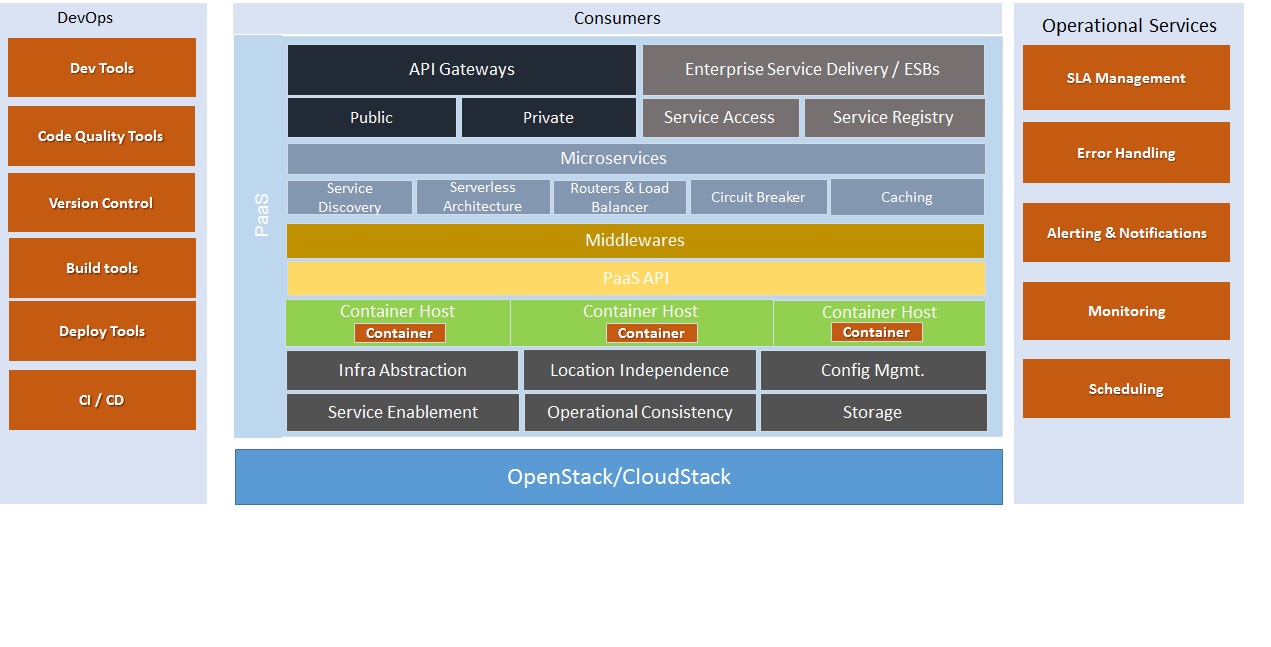 Prominent open source platforms and products across platforms that aid in the modernization journey across all the above layers includes: