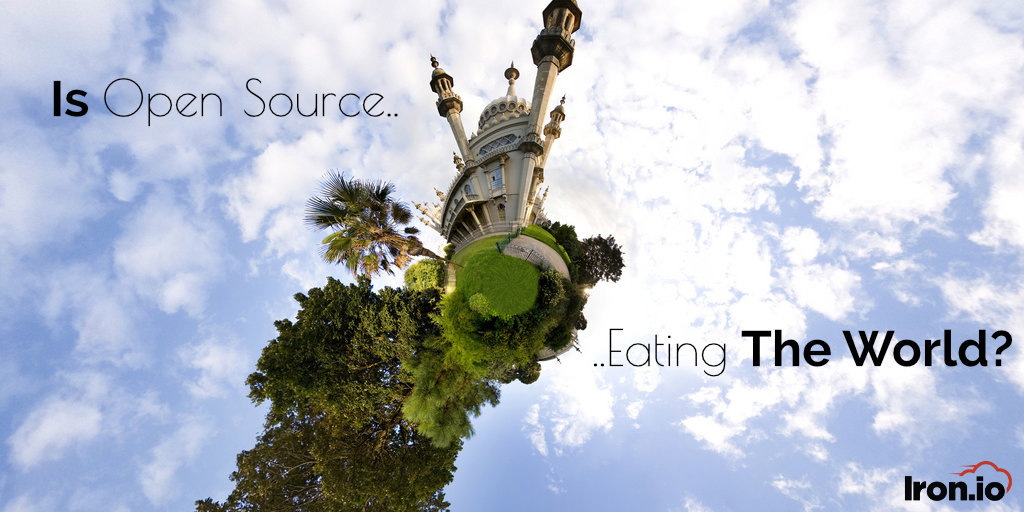 Thanks to Dominic Alves for the base image! CC BY 2.0

The phrase, “Software is eating the world,” first showed up in 2011. In 2015, open source took its rightful seat at the table.

“If the theory pervades deeper – and software does eat the world – then surely open source software will swallow it, right?” Forbes hesitantly prodded in early 2015. Later in the year they more confidently thrusted with a piece titled It’s Actually Open Source Software That’s Eating the World.

This isn’t a movement spearheaded by a single voice. Wired joined with articles like, Open Source Software Went Nuclear This Year. Replete with quotes like: “This is not just a turning point, but a tipping point,” says Brandon Keepers, the head of open source at GitHub.

This was also echoed at events like Defrag2015. I attended a talk titled, “Open Platforms and Strategies – Why your platform should be open.” Wherein I heard strong conjectures such as: In about five years most products will be shipped as open source, on a platform like GitHub.

Is open source software eating the world? Is the future all GPLs, MITs, and Apache licenses? Of course not. Linux, Netscape and Apache httpd have all been hungry in the name of FOSS for a good long while.

Predicting the future is a fool’s errand. To that point, Philip Tetlock experimentally demonstrated in a study that the average expert is “roughly as accurate as a dart-throwing chimpanzee.”

So, knowing predictions about FOSS’ future are likely to lead us astray, let’s look at what’s true now. My thesis is that open source and closed source have always had a complementary relationship. The trends we see now are largely the result of champions finally emerging from that open vs closed holy war.

Open sourcing software is mainstream. Apple, arguably the most closed company out there, open sourced Swift. Microsoft open sourced Visual Studio, .NET, and most recently their Chakra JavaScript engine. Google, Facebook, and wouldn’t-ya-know-it even the NSA host projects in the open on GitHub.

Yet, many of these orgs are also fundamentally closed. Why the mix and match? Joel Spoelsky gave us a ‘why’ in his 2002 essay on complementary markets:

“Demand for a product increases when the price of its complements decreases. In general, a company’s strategic interest is going to be to get the price of their complements as low as possible.“

What’s better than free? Sun Microsystems gave away Java, because they were in the business of selling servers. What do you need after building a really cool Java app? A server to run it on.

Our friend Joel also chimed in on a recent a16z podcast about other open source benefits:

“The systems that we’re coding against are a million times more complicated. [..] Today with one line of code, you might accept and process a credit card. [..] As programmers, we’re much more empowered.”

The more of the world that software eats, the more interconnected the world becomes. Development becomes that much more complex. FOSS is a way to get a head start on all that complexity.

If we believe entropy increases over time, then we’re probably eager to make one of them troublesome predictions. If open source effectively negates the tax of entropy, then open source’s adoption will grow as entropy grows.

It’s worth noting that Twilio, Stripe, and their brethren are a glaring problem to this model. They’re closed SaaS offerings and they also do a great job of eliminating complexity. Point is, it’s difficult to make broad statements about either open or closed solutions “winning.”

Open source is certainly leveraged at companies like Stripe, Twilio, and their brethren. But, all of the above provide a distinctly closed service. Why?

Regulations like PCI compliance, Do Not Call Registries, and even HIPAA require a good bit of business logic and studious bookkeeping to get right. Right now, most are willing to pay closed solutions to lessen the burden or remove the headache altogether.

I don’t believe that’s likely to change. Really gnarly problems that sit atop a shifting landscape will always benefit from pleasant abstractions. Hide the ugliness, and give me something useful. Closed source can be very good at navigating the twisting landscapes of bureaucracy.

The mysticism of open source is mellowing out. It’s visible in statements like There Will Never Be Another Red Hat. Peter Levine of a16z notes that while open source is a viable business option, it is often not the most effective way to go after a market.

Revenue is important. It’s a good indicator of whether a product has legs. Will it continue to be developed and supported? Satirical Twitter accounts express the fear well:

Philosophical pillars of FOSS are showing cracks, as well. Remember HeartBleed? Jeff Atwood sure does. He used it as an opportunity to disprove a Linus’ Law, which was first put forth in the Cathedral and the Bazaar.

Linus’ Law states, “Given enough eyes, all bugs are shallow.” In other words, open source software should never have catastrophic bugs. With enough folks openly reviewing the code, the only minor bugs will slip through.

“However, the Heartbleed SSL vulnerability was a turning point for Linus’s Law, a catastrophic exploit based on a severe bug in open source software. How catastrophic? It affected about 18% of all the HTTPS websites in the world, and allowed attackers to view all traffic to these websites, unencrypted… for two years.”

Ouch. That said, Atwood’s current enterprise is Discourse.org – a 100% open source endeavor. He clearly has faith in FOSS. It’s just tempered by a realistic worldview.

GitHub is the home of open source. With it, writing and sharing code is significantly easier. Amateurs are able to enhance to documentation, even if they can’t code. Pull requests empower experts to easily share and mentor, at scale.

It’s poetic that a distributed VCS (git) displacing a centralized VCS (svn) has had such a large impact on FOSS acceptance. Trying to solve a problem? Check GitHub for a solution first.

Any sane business would be foolish to ignore open source. But, how does GitHub make money? By selling private repositories. A large number of which are presumably closed source. Even GitHub is in on the game.

The future isn’t a purely open source wonderland. It’s a patchwork tapestry of both the open and closed banners.

A Bit of Both is Beautiful

There is little contention between open source and closed source software. Microsoft was once the righteous crusader for closed source. If you’re a grognard, you can still read about some of their war stories.

Today, Microsoft is fully on the FOSS bandwagon. Like many others on the wagon, they’re carrying plenty of closed source projects alongside the open. And hey! That’s where Iron.io sits, as well. We love open solutions like Docker, Golang, and Rails. We also rely on closed solutions like Slack.

Modern businesses need to fully embrace both worlds. Google, Facebook, and Uber are prime examples of the success of this enlightened approach. They prove it’s possible to leverage open source, without having your lunch stolen.

The holy war has ended. The idea that open source and closed source are in contention needs to end too.

Published at DZone with permission of Paul Burt. See the original article here.