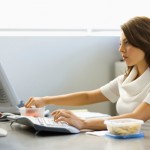 sitting at work has got a pretty bad rap recently, with proclamations that it is worse for our health than smoking.  it has helped to underpin the rise of things such as standing and treadmill desks.

alas, new research from the university of exeter and university college london suggests that sitting for long periods isn’t quite as bad for our health as previously thought.

the study tracked over 5,000 people over a 16 year period, and found that sitting, whether at home or at work, was not actually associated with a greater risk of dying.

the findings contrast with studies from earlier this year that proposed a number of severe health implications of sitting for prolonged periods of time.

what’s more, they also contradict official guidelines from bodies such as the national health service, which largely echo the ‘sitting is bad for you’ mantra, even if you do significant exercise too.

“policy makers should be cautious in recommending a reduction in the time spent sitting without also promoting increased physical activity,” the authors say.

“our study overturns current thinking on the health risks of sitting and indicates that the problem lies in the absence of movement rather than the time spent sitting itself. any stationary posture where energy expenditure is low may be detrimental to health, be it sitting or standing.

“the results cast doubt on the benefits of sit-stand work stations, which employers are increasingly providing to promote healthy working environments,” they continue.

so it would appear that encouraging activity should be the course to take rather than necessarily discouraging prolonged sitting.

earlier this year, i wrote about an interesting project that is attempting to do just that by applying game technology to encourage participation.

a game, called step ahead: zombies , the game encompasses a walking challenge whereby players have to escape from the zombie invasion by walking (in the real world).

organizations can enroll onto the program and encourage employees to participate, either with a smartphone, tablet or desktop.

employees are divided into teams who are charged with getting to the safe house as quickly as possible, with progress measured by the average step count across the team.  so having a slacker on your team can severely harm your chances of success.

if you fail to get to the safe house, you’re eaten alive by the zombies, and thus are enrolled onto the zombie team.

if players have the right equipment, they can use a range of wearable devices to input their steps into the game, whilst a healthy diet can also help to boost resistance to zombie attack.

initial results seem very positive, with one organization charting a rise in employee engagement of 20 percent among participating employees.

it would seem that this kind of scheme is perhaps better than investing in expensive treadmill or standing desks.