mark tiele westra wrote a splendid post two years ago, " the ball of mud transition ," in which he elaborated on an idea nabbed from a stuart kauffman book. he writes,

"take 20 buttons and a ball of string, and scatter the buttons over the floor. then take two buttons at random, and connect them using a thread. do this for a while ... pick up a random button, and count the number of buttons it is attached to."

apparently, a threshold number of connections emerges below which picking up a button lifts few others with it, but above which a large number of buttons will be snagged (the referenced paper shows that this, "giant component," will contain half the buttons).

considering software, mark then wonders whether such a threshold of dependencies might signal a transition to the infamous big ball of mud pattern and investigates with some clojure experiments.

this post will tread a similar path, but will analyze the effect on two types of dependency. the experiment above focuses on direct dependencies, dependencies between just two methods (strictly speaking, "binary dependencies," may be a more accurate term, but the connection to compiled code may confuse).

d() - but contains only two transitive dependencies - a() 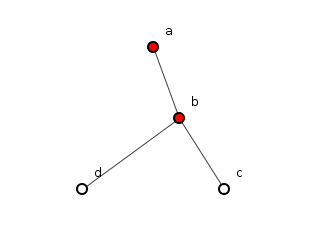 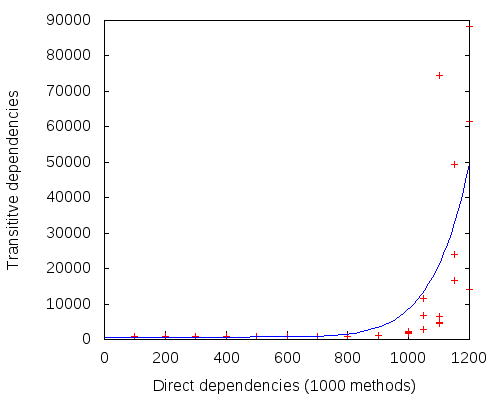 the red crosses in figure 2 show (the blue line is the theoretical trend) that as long the number of random direct dependencies remains well below the number of methods (1000), then the total number of transitive dependencies stays relatively low, indicating systems that would be cheap to maintain.

so, can we expect real systems with more direct dependencies than methods to also show this catastrophic structural degradation? table 1 shows the relevant data for some recently reviewed systems.

it turns out that the model above is a little too simplistic to be applied to source code: it suffers from two flaws.

firstly, it takes no account of java interfaces. an interface method is abstract; having no body it cannot call others methods, and so cannot be the source of a direct dependency.

in well-structured systems, furthermore, both these points reinforce one another. with gof's , "program to an interface, not an implementation," and martin's , "depend on abstractions not on concretions," large percentages of direct dependencies terminate on abstract methods. table 1 shows the actual percentage figures for those analyzed programs in the right-most column (several ironically low), with ant's figure hidden till later as a test of a theory.

let us run the 1000-method experiment again, but this time let us force 16% (casually chosen from table 1) of all direct dependencies to terminate on abstract methods, see figure 3. 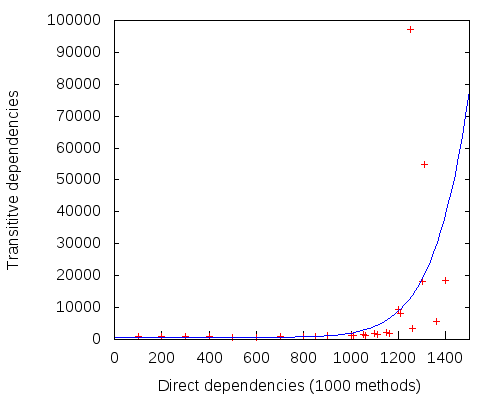 whether we choose 10,000 to represent structural chaos or some other number, the principle of, "program to an interface not an implementation," seems to delay the onset of that chaos.

a figure of 16% abstract-terminating dependencies indeed seems quite low. how does the chaos-threshold move as we add more and more interfaces? see figure 4. 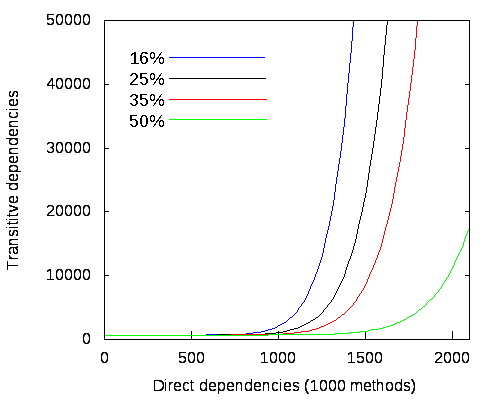 of course, all of these analyses lack the scope and statistical rigour to form definitive conclusion. they suggest, however, the crucial importance of abstraction in the fight against structural complexity.

as a final finger-in-the-air test, this theory would predict that ant's embarrassing showing in table 1 is due to its having a very low number of direct dependencies terminating on abstract methods.

program to an interface not an implementation.

depend on abstractions not on concretions.

these principles exist for a reason.