Before understanding the Isolation Level of Microsoft SQL Server, we must recall the first class of Relational Database Management system (RDBAMS) and the ACID property of RDBMS.
Types of Isolation Level in MS SQL Server
There are five type of Isolation level in MS SQL Server
1.  Read Committed (The Default Isolation Level of MS SQL Server)
2.  Read Uncommitted
3.  Repeatable Read
4.  Serializable
5.  Snapshot
Before further proceed with Isolation level we have to clear understanding about two things
Dirty Reads
This is when we read uncommitted data, when doing this there is no guarantee that data read will ever be committed.
Phantom Reads
This is when data that we are working with has been changed by another transaction since you first read it in. This means subsequent reads of this data in the same transaction could well be different.
To Check the Current Isolation Level
DBCC useroptions 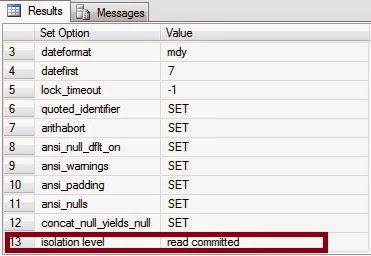